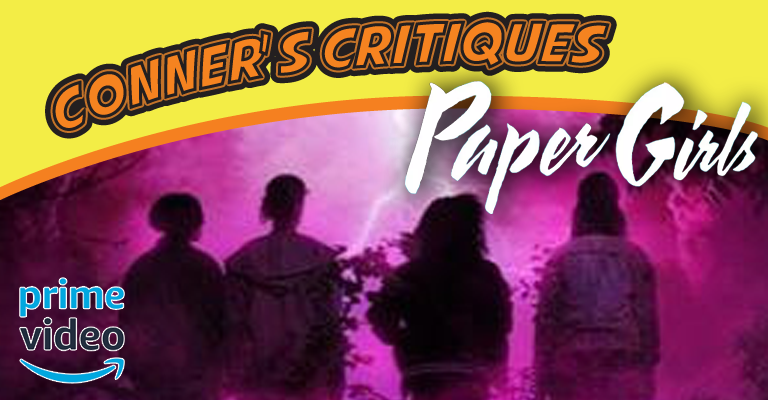 When we were given the opportunity to review this show, we were not even aware that it was coming out, I hadn’t even heard about the graphic novel. Shame on us! Lindsay was aware of the original source material, years prior. Check out her preview of the series Here! As we said earlier, this series is based on a graphic novel from Image Comics created by Brian K. Vaughan, Cliff Chang, and Matt Wilson. The story itself is a sci-fi story focusing on a group of young females, the Paper Girls of their town!

We are big fans of sci-fi, so we jumped at the chance to review this one even though prior to reviewing it we were ignorant! As always we break down our reviews into three categories, Story, Acting, and Overall. So let’s jump in!

The series starts off following four 12-year old young girls running their paper routes on “Hell Day,” the night following Halloween. During their route they encounter bullies, obstinate customers, and each other. All they are trying to do though is just get through their paper routes. However, things take a turn when someone steals their coveted walkie talkie.

While attempting to retrieve their device, they get caught up in the war of a group of time travelers fighting against a mysterious shadow organization.

As the journey takes them through various points in time spanning over three decades, the group learn a lot about themselves, begin to bond, and struggled to overcome a seemingly heartless enemy.

As far as sci-fi’s go, the first episode is a little bit fuzzy, and leaves the audience in the dark and confused. As the story continues though, the journey begins to develop and explain what exactly happened in that first episode. We also slowly begin to understand the facts and rules of the the universe.

“If you stick around, you will definitely fall in love with the high-concept stories, and well-managed plot points through out the series.”

This translates into a need for a commitment from viewers to make it through the first few episodes. If you stick around, you will definitely fall in love with the high-concept stories, and well-managed plot points through out the series.

All four of the young women play main characters for the show and do an insanely good job not only carrying their roles, but addressing the heavy topics that are showcased throughout the series. They manage to keep moments light and fun, while still engaging in serious and sometimes taboo topics.

Another amazing stand out in the series is Adina Porter who pays the titular villain Prioress, as well as Ali Wong who plays an older version of Erin.

Their moments on screen are are unique and interesting, but overall while they are great characters acted amazingly well, the real gems in t his series is the young actors. Camryn Jones, Riley Lai Nelet, Sofia Rosinsky, and Fina Strazza all do a great job, which is made better by the older actors who let the kids be the focus point, and as a result shine!

Throughout the series the story becomes stronger and more interesting. Viewers will become enthralled and obsessed with how the story will continue or end. Twists and turns throughout keep you interested. The actors as a whole create a unique and enjoyable story.

I wouldn’t specifically call this show something that is designed for young children, the subject matters are unfortunately considered by society to be pretty extreme. If you watch this show with your children, you’re going to need to have some discussions afterwards over certain topics. That being said, it’s not an outright bad show for young adults, as long as parents are there for support and to answer questions.

The elephant in the room is of course Stranger Things. A lot of people are going to try to compare this show to Stranger Things. I don’t think it’s a fair association. While Stranger Things is definitely an amazing show, they don’t own the concept of young adults dealing with a Sci-fi story.

This show is unique and interesting on its own, and stands out and above other series in this genre. It’s not the next Stranger Things, it’s their own interesting story that will definitely keep you on the edge of your seat.