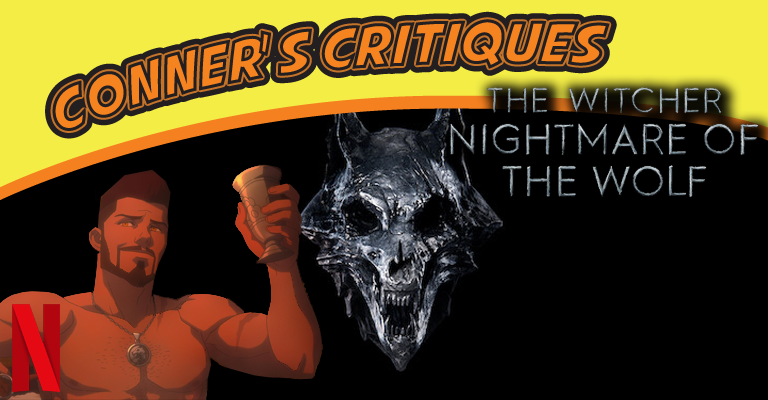 What’s not to love about the world of the Witcher? Monsters, lust, and lore! It’s a world where a man can make a decent wage as a hero, but the costs of such might be higher than just a scratch here or there.

As always my critiques will break the film into three categories, Story, Acting, and Overall. We’ve done our best to make this review SPOILER-free, so read without fear of ruining the movie or the second season of The Witcher.

STORY: 8/10
As you may know, coming to season two of The Witcher is Vesemer, Geralt’s mentor who helped him become the noble Witcher of the titular series. The anime “Nightmare of the Wolf” shows you the past of Vesemer, how he came to find himself in the company and trials of becoming a Witcher, and the journey that set him on the path to becoming the morally upstanding Witcher he is. The Witcher he has to be, so he could carry on and teach the practice on to newer Witchers of the next generation.

Told like the tales of the live-action series, out of order jumping through time, the feature tells important facts when needed. The movie will take fans, of the world of The Witcher, into Vesemer’s humble and poor beginnings, the reason he, unlike many others, sought out the Trial of the Grasses.

A fair warning though, the story is violent and includes quite a few boobies (specifically and intentionally stated in the most immature manner). While this film might be animated, it is still as lustful and violent as any of the books, video games, or Henry Cavill’s live-action version.

Still, it’s a fun and complete story that will leave viewers just enough threads to justify unraveling them in the second season of Cavill’s show, or potentially in a second anime film.

ACTING: 7/10
Since this is animated, physical acting is out, but the lines delivered by the film’s actors should be viewed no less important than the live actors in Cavill’s show. Standouts for quality in the series of course was Theo James as Vesemer and Graham McTavish as Deglan. Both of them artfully crafted emotion and presence with their voice acting in this film, and help their characters fit within the realm of The Witcher.

OVERALL: 7/10
It’s not the fault of the lore or anime, but I miss the existence of a Dandelion or Jaskier character to play the humorous jester dancing around the story and granting insight into the background facts. Tom Canton as Filavandrel and Matt Yang King as Luka clearly attempt to perform the roles played by Joey Batey in the live-action series and games, but don’t hit the mark and fall short of making the movie more than just a boob filled bloody violent story.

That being said, it was still enjoyable to watch, but the story felt small in comparison to the games, lore, an episode of the live-action, or even the massive book I’m the world of The Witcher.

Conner’s Final Thought(s):
This is a must-watch before the next season of The Witcher coming in December. I don’t know how much backstory they’ll cover in the new season of Geralt’s Mentor, or if they’ll leave it to a mystery for those not familiar with the lore of the books. Even if you traditionally are not a fan of anime or animation in general, you should watch this movie. At worst, consider it fun and bloody homework.

Watch the anime movie The Witcher: Nightmare of the Wolf Here when it drops on August 23, 2021!