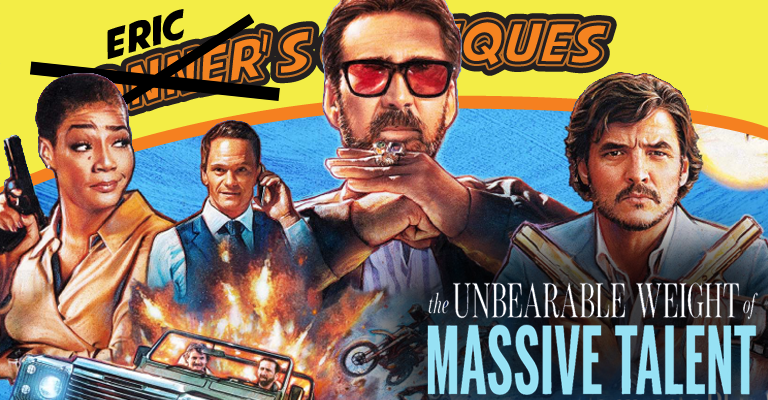 Nicholas Cage is back, not like he went anywhere, with the new film The Unbearable Weight of Massive Talent. While that movie title is a mouthful, a lot of people have just been calling it Massive Talent.

We got the chance to screen this movie before it came out, and as always we like to cover our reviews in three categories: story, acting, and overall.

So let’s remember the golden rule, “Always be Cage-ing,” and dive into our review!

We start off the movie with a look into the fictional life of Nicholas Cage. We see him try to force an audition to what he hopes will be his next big film, and then are pulled very quickly into his personal life with his inability to connect with his daughter and his recent divorce. Next we learn of his increasingly stressful debt, which is mainly caused from living in a hotel for over a year during his separation.

When he snaps after not getting the part he was striving for, it causes a further rift between himself and his daughter. His ex wife asked him to stop being a Cage the actor, and just be his daughter’s father. Before Nicholas Cage can retire from acting though, he takes one last gig. A million dollars to just attend a wealthy man’s birthday party.

What starts off as a creepy fandom weekend, becomes the friendship and adventure of his lifetime. The bond between the two men becomes deep and profoundly hilarious. Everything seems to be going fine until the CIA approaches Nicholas Cage and ask him to help them find a girl that his new friend had kidnapped, revealing to him that the wealthy fan is actually the leader of a gun running cartel. Now Nicholas Cage must betray a man he sees as a brother to him. What’s worse is that this simple mission becomes more and more complex causing him to rekindle his love for acting. Will he really be able to give up Hollywood for his family?

…[Cage] struggles to try to keep in control of a situation that slowly turns from a buddy story drama, into an over the top action film.

The story in this movie is incredibly manic, with insane ups and downs. Cage’s character suffers several paranoid delusions, schizophrenia, and drug induced episodes while he struggles to try to keep in control of a situation that slowly turns from a buddy story drama, into an over the top action film.

I’s usually hard to tell if Cage is in on the jokes about his acting style which he himself has called “Nouveau Shamanic,” but how well it has been distilled into a character for the sake of this comedy either shows off that he is in complete control of how much “Cage” he is putting on the screen, or the director, Tom Gormican, is amazing at reigning in Cage to a massive degree. Since it would be insane to think this relatively green director could control Cage, I have to believe that the former is the answer.

As for other performances, most of the people in the background stay in the background. From CIA agents, to cartel members, to even Cage’s fake family, can’t seem to do more back fill in as background story for the two main characters played by Cage and Pedro Pascal. Between the two, I have to talk the most about Pascal. He is a national treasure that we do not deserve. How he takes this seemingly bland character of a spoiled rich cartel boss and turns him into a multileveled loveable goof is so impressive.

This movie would not work if not for how loveable and believable to the character Pascal performs.

This movie would not work if not for how loveable and believable to the character Pascal performs. I don’t know how much of that credit can goto Pascal however, since Pascal himself says that working with Cage has “reawakened” his passion for acting. It’s clear from his top tier performance in this film.

What a journey. This is one of my favorite Nicholas Cage films now. I looked into it, and Cage has been in 103 movies! I’ve only seen 24 of those films, but frankly I thought more. While I normally call Con Air my favorite in his lineup of films, this movie has taken over the title. It’s just universal enough to be watchable regardless of my attitude, and doesn’t require me to not be in the mood for an action, drama, or comedy.

This movie reminds me a lot of Adaptation. That movie was beautifully written, and incredibly witty, but lacked the energy that would have made it appreciated and like by the masses. This film, also with Nicholas Cage, seems to have taken that manic energy that Cage excels at, and redirected it with the lovability of Pedro Pascal to create a film that is fun and enjoyable to watch from start to finish. This isn’t a thinker, all of the time, it isn’t a drama, most of the time, it’s just a fun ride that is just crazy enough to hold your attention throughout the film.