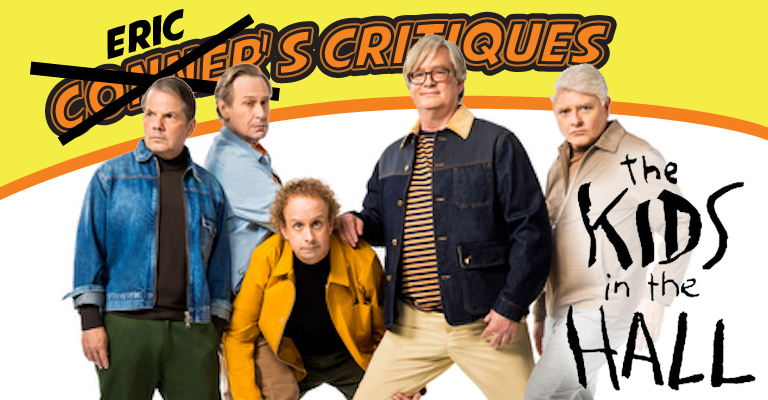 As a child growing up, comedy was a major thing for me. It was a great venue to relieve the stress of a dysfunctional family, while also giving me the ability to laugh at my surroundings.

One such comedy that always made me laugh was kids in the hall. A lot of people have defined them as queer comedy, even though only one of the members of the cast is actually gay. However the cast members were fully capable and willing to change and swap genders specifically for roles and capable of fully embodying a female. This was pretty unique for the time.

So when I heard that the Kids in the Hall was coming back for an Amazon limited series, I jumped at the chance to review it before it was released.

While this is a comedy show, with skits, I feel there’s no problem with addressing this review as we do with other reviews. So we’ll be covering this series from its story, acting, and overall.

It’s hard for sketch comedy to maintain a story throughout the entirety of the series. However, one thing I can talk about is the story within the first episode.

The first episode starts off with the Kids in the Hall explaining where they’ve been this giant chunk of time, a very interesting and funny dealing with satan, a conglomerate corporation who owns the rights to Kids in the Hall, who oddly acts just like Lorne Michaels, and their deal with Amazon moving forward. The truth of where they’ve been is a little bit more nuanced, but we’ll talk about that more in our other article talking about the documentary series that Amazon is also releasing. The show deals with the question when considering if the Kids in the Hall comedy skits still fit within society. They easily find their own place in the world of more modern comedy.

It’s impressive how much the sketches have the same energy as the original series, yet also feel like the new skits belong to our time as well. The comedy group has not lost a beat, and they have definitely kept their finger on the pulse to create such a fun and engaging series.

If you are a fan of the original series and worry about the humor falling flat are being offensive in today’s day and period, don’t worry it is. But in a good way.

If you are a fan of the original series and worry about the humor falling flat are being offensive in today’s day and period, don’t worry it is. But in a good way. Fans of the original show will have a better understanding of what that

Fans of the original show all know what we mean by that. Kids in the Hall had the ability to skirt around what was appropriate but same time able to make people laugh about the humor from a completely wholesome place.

A skit about a fax machine, the end of the world, or even a drunk father, the people behind Kids of the Hall are able to convey not only a complete story but to make you feel like it’s OK to laugh about the most awkward and insane concepts.

All five members of the cast returned for this short series, and a bunch of their characters was able to return to the small screen for the series.

I will admit that some of my favorite characters were not included, but a, but a couple of the bigger ones are included in this area.

I will specifically say that this series’ only flaw is that it is only five episodes that are only 30 minutes long. I would have hoped the series would have done another 20-episode season, and then I would have been more than happy to say another final farewell to the series. However, if this is truly the end, I would have wished for a lot more episodes. Hopefully, Amazon and Kids in the Hall will be back for another season, and hopefully, it’s longer than five episodes!

While the original Kids in the Hall series was never really an appropriate show for younger audience members, I will warn that there is nudity in the returning series since it is able to show it since they are on Amazon Prime Video. The censors can go fuck themselves. Children should be wary. You don’t want to watch this show. Parents will find that they’ll want to keep their children’s eyes closed at least for a specific part in the first episode.