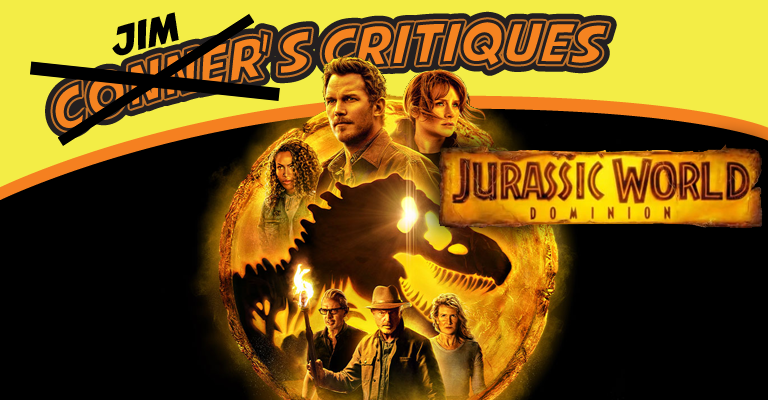 Hey, folks! Jim here and I’m borrowing Connor’s soap-box again to give you my thoughts on the newest epoch in the Jurassic Park property. I’ve been a huge fan of Jurassic Park and Jurassic World since the movie came out in the 90s and I literally couldn’t put the original book down when I first read it as a child. I have been excited for this movie since the first trailers… did it live up to the hype!?

As per usual, we’re going to break this down into three categories: story, acting and overall.

I’m not going to spoil anything major here but I will give you a breakdown of the setup.

Owen Grady (Chris Pratt) and Claire Dearing (Bryce Dallas Howard) from the prior two World movies are living out in the wilderness, away from civilization to raise Maisie Lockwood (Isabella Sermon) in an environment where she’ll be safe. If you don’t remember, Maisie is a human clone and very much someone that certain shady characters would like to get their hands on. She’s also become a typical rebellious teen. So. There’s that.

Meanwhile, we have the return of Ellie Sattler (Laura Dern) as she is dealing with a plague of ginormous, pigeon sized locusts. Yikes! She needs to get to the bottom of where these things came from so enlists the help of Alan Grant (Sam Neil – one of Aotearoa‘s finest!) And, luckily enough, she’s been invited to tour Biosyn by Ian Malcolm (Jeff Goldblum) and she suspects Biosyn is probably behind it all.

“If you’ve noticed the prior two paragraphs are light on Dinosaurs, you’re not wrong.”

If you’ve noticed the prior two paragraphs are light on Dinosaurs, you’re not wrong. The Dinos are there – Blue and her daughter, Beta (Produced via parthenogenesis due to monitor lizard DNA used in Blue’s genome… but honestly, they should have used whiptail lizards for that bit of plot bending. Whiptails are more successful at clonal reproduction than monitors. I get that more people have heard of monitor lizards than whiptails but still.) live near the Grady homestead. Claire rescues a baby Sinoceratops from an illegal breeding operation. Apatasauruses interrupt a logging operation and Owen wrangles parasaurolophus like a cowboy…. but these scenes are small side stories compared to Maisie getting kidnapped.

“…the locust storyline was at least more interesting, but it again puts the Dinosaurs in the back seat…”

I didn’t care about that much. Sorry. It felt like way too much of the story. Liam Neeson can rescue the kid in a Taken sequel for people that want to watch that – I’m here for Dinosaurs, dammit. Likewise, the locust storyline was at least more interesting, but it again puts the Dinosaurs in the back seat. Beta being kidnapped and Owen rounding up a posse to rescue her is all we needed for this movie.

“…the original trio reprise their roles beautifully. (I mean, it’s Jeff Goldblum. What more than that do you even need?)”

The internet called Chris Pratt the worst Chris a while back and the internet can die on that hill if it wants – I still love Owen Grady and Pratt still brings charm and humor to the role with a side of bad-ass. Bryce Dallas Howard does a great job as Claire; passionately trying to right the wrongs she took part in back when there was a Jurassic World theme park. And of course, the original trio reprise their roles beautifully. (I mean, it’s Jeff Goldblum. What more than that do you even need?)

B.D. Wong as Henry Wu returns and I definitely cannot fault his acting. He’s playing an older, softened version of the character and while I wasn’t exactly in need of a Henry Wu redemption arc, he handled his part in the story wonderfully.

Look, there are some amazing scenes in this movie. The last Jurassic outing is going all-out with crazy, sometimes positively slapstick action sequences (Some of the visual gags during the Malta chase scene made me guffaw out loud.) dinosaur fights, stakes being raised through the roof…

I just wish it was more about the dinosaurs.

This movie takes place in a world where the dinosaurs have left their Islands and have made their way across the globe. The feeling I got at the end of the last film (Which was, admittedly, kind of dismal) was “Hey guys, it’s their world now… well. Again. And we’re just livin’ in it!” but that didn’t really come through, here. Despite the build up we’re once again placed in a facility where dinos (Oh, and dilophosaurus! Not a Dinosaur!) are running amok and we just need to make it out alive. Very much in the tradition of Michael Crichton’s works, to be sure, but I wanted something more out of the last of this trilogy and I just didn’t get it. And that’s okay – I’m just one fan, after all. I’m sure there are plenty of people out there who will enjoy this movie a lot. Especially if you’re someone who enjoys plucking out easter eggs – there’s a lot of them.

This has been billed as the last in the series and that may be true. But Hollywood loves nothing more than a sequel, right? A reboot, a remaster, a retelling. There’s so much potential alive in the world created by Michael Crichton and Stephen Spielberg 30 or so years ago… I have to believe there are more stories to tell. I’ll be waiting for them… even if I have to wait 65 million years.