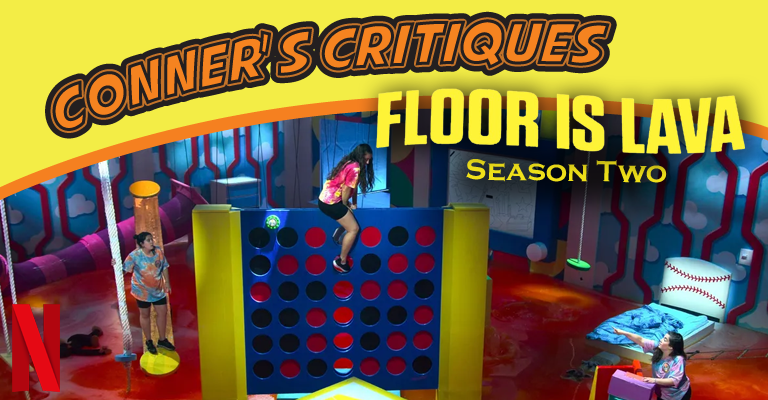 The Floor Is Lava is back for a second season on Netflix, so we dove back into this fun and exciting physical game show.

As always we break down our review into story, acting, and overall. This time we’re gonna be swapping out the story with design, and acting with contestants. Let’s jump on in.

They changed so much about this show for the second season. It’s really crazy how much more different the show is. Firstly they’ve increased the size of the room quite a bit. This allows for a harder obstacle course for the contestants, as well as more space for parts of the rooms that can be interacted with.

They’ve now also included exit passes to the show. Which forces the players to look throughout the room and for each player to find a token before being able to leave.

“The Volcano creates more of a game show feel as well as eliminating teams that would win solely due to chance.”

Additional they changed the experience from one course with the winner beating out the other two groups, to creating a second course, a constant course The Volcano. This makes the three teams compete to be top two, and then head off in a shorter but more skillful experience. The Volcano creates more of a game show feel as well as eliminating teams that would win solely due to chance.

The biggest change to the show however is the lava. We’ve been told that the lava in the first season was a type of slime, but the substance still acted and responded to being thrown around just like water. This season whatever they’ve done to change up the material has made it almost completely slime. The way it bubbles, rocks back and forth, and slashes is unique and does not act at all like water. Additionally, when a contestants gets the slime on their feet or body, it kind of stays on them like a thick layer. It definitely makes it harder for the contestants continue within the course with their legs covered in a slippery substance.

These changes really changes up the game show.

The type of contestants don’t change that much from the prior season. They even brought back one set of contestants from the prior season to give them a chance to redeem themselves. The biggest change that affected the contestants however in this season is that the arena has an observation deck. This season all the players hang up on the observation deck with the announcer and watch the following competitors, comments on the new teams.

While this is a game that creates a lot of competition, it was awesome to see the contestants being in awe of the skill of the other players. It’s interesting seeing them watch other people go through what they did, and their take on solving the problem.

This also adds to the competition. Once the players move onto the Volcano the contestants are now running head to head which will result in the players commenting or taunting each other. It allows for time to trash talk and create a more fun and engaging experience.

The Floor Is Lava is a great game show that takes elements of elements of childhood fun and add in aspects of Wipe Out. A lot of the things that people have to do to win the game are not that much more difficult than what you’d have to do on childhood playground equipment. It makes the viewer think that they could be as successful or more on the obstacle course. It’s great for armchair athlete and coaches.

If you’re a fan of game shows and want a new one to add to your collection, The Floor Is Lava’s 2nd season is a great show to watch. Even if you watched the first season and didn’t like it, it’s worth a re-watch for the second season thanks to the changes. Additionally, the whole second season is live right now, so you can watch through all of it without having to wait week after week.