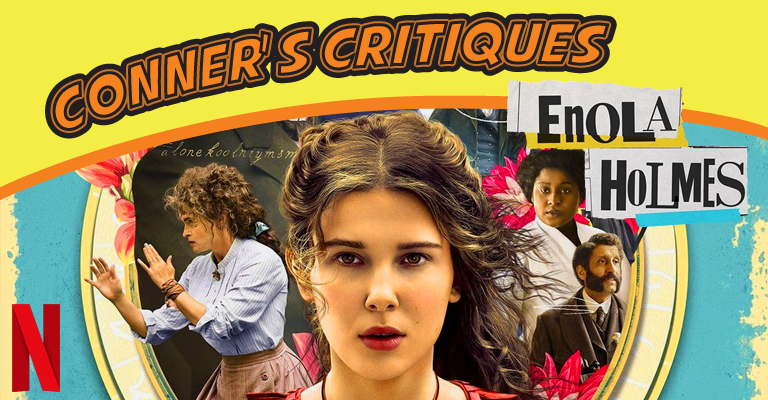 With all the love still ongoing for Sherlock, with the new Robert Downey Jr. flick on the way, the Sir Ian McKellen serious drama, and the cries for a return to Benedict Cumberbatch driven modern-day version, people can’t get enough of the detective. A period version spin-off story is even coming soon focusing on Holmes’ Irregulars. It makes sense then for the love to extend to the book series based on The Enola Holmes Mysteries book series. This young adult book series started in 2006, and included 6 stories.

This movie, appears to focus primarily on the first book, “The Case Of The Missing Marquess.” Fair warning, as you read this review, there may be some Spoilers ahead. As always we break down the critiques of the three categories: Story, Acting, and Overall.

STORY: 5/10
The story starts off focusing on explaining the existence of Enola. This was a wise feature of the movie, since while most people are familiar with the world of Sherlock Holmes, they may not be aware of this book series, as Enola is not a character of the original series created by Sir Arthur Conan Doyle. The story from that point after an interesting and creative introduction leads us into the main issue of the story the missing mother.

It’s important to note, that if you have an issue with the film’s editing style, you are going to get a bit frustrated because it continues throughout the movie, as Enola breaks the fourth wall to regularly explain situations and her opinions to the audience.

While the main story seems to focus on the missing mother, it feels odd to say, but the real story of the movie slowly becomes about the runaway boy, that crosses Enola’s path. While I understand the context of the story comes from the book, and the intermingling of the point is well done to some degree, this is my primary issue with the film. While enjoying a book, you have the title that allows you to understand where the story will go, this film is simply called “Enola Holmes” and the first 20 minutes of the film sets up that the mystery would be about her mother.

Lastly, I will say the love interest story feels forced a bit, until the delve into the backstory of the boy and Enola realizes more about him connects to her. However, until that moment, her feelings for him doesn’t really feel appropriate, and partially forced.

ACTING: 8/10
Millie Bobby Brown’s portrayal of Enola is part Robert Downey Jr. “Sherlock”, part Zack Morris, as she runs around the story, detached from the world focused on her mission, expounding to the audience. I will say that it’s a bit sad that while her acting was endearing, the work of Henry Cavill, unfortunately, overshadows hers. He does such an amazing job being loveable while also showing subtlely his watchful eye. Even when he is outsmarted by Enola, his expressions perfectly show shock, but admiration. Helena Bonham Carter plays a strong and quirky mother, doing whatever it takes to make sure her daughter is strong, independent, and able to take care of herself in the world.

Even Sam Claflin, whose sole purpose as Mycroft Holmes, does an awesome job endearing the audience, as they love to hate him.

OVERALL: 7/10
This was an enjoyable adventure in home cinema, great fun for the full family, with a strong and independent young female lead. We loved so much of the story and the subtle style. One of our favorite things is that during the constant flashbacks to Enola’s lessons from her mother, when Enola figures something out, her mother in several of the flashbacks winks at her. It was pretty enjoyable. While some might have found the editing and style of the film annoying, we were endeared to it.

Conner’s Final Thought(s):
We are actually very interested to see what more of this series has to offer, and wouldn’t mind watching another film as there are 5 more stories to work with. Honestly, though, we may never see that, as Sir Arthur Conan Doyle’s estate has sued the film in connection to Henry Cavill’s performance. While a lot of the works of Sherlock Holmes has entered the Public and is open to use from the public, not all of the stories have done so, and the estate argues that the later books show that Sherlock has developed emotions, which are still protected by copyright. Therefore the portrayal by Henry Cavill of Sherlock having emotions about his little sister is in direct violation of copyright laws.

It’s to early to see how that will go, but it could prevent us from seeing more of this awesome series on Netflix down the line.