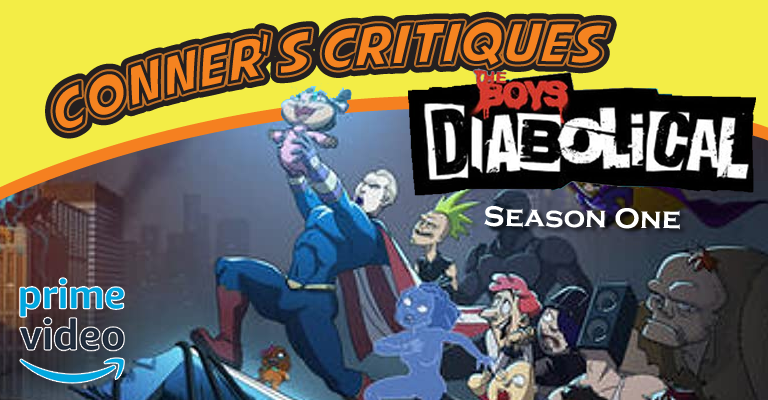 Boy have we been waiting for … well… The Boys.. As we wait longer and longer for the next season of the show to come to fruition, Amazon Video has been so kind as to give us an animated series that is called The Boys: Diabolical. This series, unlike the continuing storyline of the main The Boys series, will focus on small looks within the world of The Boys as a group of small stories.

Before I give the ghost up too early, let’s jump on into this review. As always we’ll be talking about this article from the point of view regarding the story, acting, and overall!

For the most part, the stories do feel like they could one hundred percent exist within the world of the boys, a couple of the episodes, through their stylistic choices, feel a little bit out of place. That being said, the heart of the episodes, the ultra-violence that tethers them all together, do feel very appropriate for the world.

There are so many episodes of the Diabolical series, it’s hard to specifically talk about every single one of them here in this review. So I’m gonna talk about my favorite episode, Boyd in 3D.

This episode feels almost inspired by Disney’s Paperman short in a way but with the fun aspect from the end of Hulu’s Happiest Season due to the way the story continues through social media. This story is very interesting as both of the main characters hate themselves, and are looking for a way to love themselves, and then each other while a shady conglomerate “helps” make their lives better.

Tragedy and hilarity ensue and the characters, story, hook, and the surprise ending is very fitting for the world of Garth Ennis’ comic books. The story also is able to match the over-the-top style of the Amazon Prime Video television series.

It’s an animated series, and while we love voice acting and I have constantly talked about it through the course of all the reviews we write on this site when focusing on animated projects, there’s a little bit more to this than you normally see with a series. Similar to an anthology series like Love, Death, & Robots, the voice actors are not given a lot of time to set up their character, or even delve into the character’s aspects. However, when it’s artfully performed, and performed in an engaging way, it makes these short stories sing. Thanks to the talented work of Antony Starr, Awkwafina, Elisabeth Shue, Jason Isaacs, Kumail Nanjiani, Nasim Pedrad, Aisha Tyler, Christian Slater, Simon Pegg, Giancarlo Esposito, John DiMaggio, Dominique McElligott, Don Cheadle, Chace Crawford, and Eliot Glazer you can really feel the stories that were told.

Prior to its release, this was not the series we were hoping for, a lot of people would have preferred to have had the next season of the live-action show, or even the spin-off live-action show regarding college students. Having watched the series, I am personally glad that we were able to not only get such a fun and enjoyable experience from the series, but I hope it opens more doors for the showdown the line.

Especially since we get to see a lot of our favorite animators and writers put together stories within the world of The Boys.

While there are so many different voice actors in this short series, and the art style constantly changes per episode, the series feels a lot more like the Animatrix meets The Boys.

One of my favorite things from this series was getting to see the original art style and characters from Garth Ennis’s comic. Additionally, we also got to see Simon Pegg voice the character that was originally designed for him in the comic. While in the live-action show he couldn’t be hired for the main character due to being aged out, the series did at least cast him as Huey’s father.