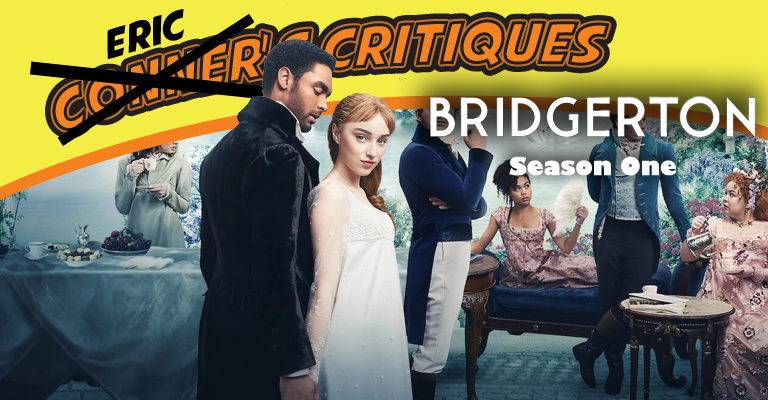 Bridgerton season two is almost upon us, and with that in mind we thought before reviewing the second season we should and its release we would critique the first season of this well-loved period drama.

Normally Conner does these reviews, but I was interested in this series so I took up the task. As always our reviews cover story, acting, and overall. So let’s not keep the Ton waiting, and jump on it.

The story of this series primarily focuses on the family Bridgerton, the namesake of the series. The show is not exclusively set on them though, as we receive insights into the house of the Featherbottom family, Simon Bassett’s personal life, and small tidbits revolving the Queen and her journey to unmask the gossip spreading Lady Whistledown who almost narrates every episode of the show.

In the household of the Bridgertons, the eldest son has taken over the mantle of Viscount from his not-so-recently deceased father. As part of his duties as head of household, he must find his sisters suitable husbands. As she has just come of age, Daphne Bridgerton is new on the scene being hounded by a man she does not want to share her time with. In her effort to escape this man she bumps into Simon, a Rake (a man who is not a gentleman and likely sleeps around), who is in town to settle his father’s estate to take over his title and lands, and is dragged to a ball by his godmother.

They do not like each other, and Simon believes Daphne is using the excuse to steal time with him like all the other women in town, unbeknownst to him that she is his oldest friend’s sister. While the two do not have any interest in one another there is something the two can help each other with, and that is pretending to be courting, so they can be left alone, for Simon, and become more desirable, for Daphne.

When a bond begins to form, the two must deal with the issues that they are not seeking the same thing in life.

It’s high drama, with a lot of energy due to the mixture of high society period status and classes. The only drawback I can expound about this series is that a lot of the issues the characters have could easily be solved by simply being open and honestly communicating with one another. Then again, if they did, then this really wouldn’t be a drama, but more of a how-to guide at a healthy relationship.

Rége-Jean Page is completely captivating as Simon. I will admit that I completely understand how Rége-Jean Page became a sensation due to his rule in the series. When the world was losing its mind over him, I had not even started watching the show, but now I get it. He plays brooding, but steadfast in his morals. He may start the season as a Rake, but he ends it as a complete gentleman.

Phoebe Dynevor as Daphne, (anyone else take a bit to realize all the Bridgerton kids are named in alphabetical order or was it just me?), did a superb job in her role. She plays an incredible young woman who has no idea of the world of men and marriage before being thrust into the realm of the Ton. Watching her scheme and plan her way to a better future to only see her falling for the man she schemed with is a tired and old story of romantic films, but here with the chemistry of Phoebe and Rége-Jean it feels as if it is fresh and amazing.

To be truly honest I love the way the show specifically addresses race. As some might not know, Queen Charlotte married into the family and it was believed by many that she was half-black. As a result of this, the series has taken the idea and ran with it and created a fictional version of London not hung up on the concepts of race. This specifically allowed them to cast amazing actors for the roles regardless of the nationality of the character. In the book series, this was not specifically covered, but the show even takes it a step further and has Simon specifically brought up race stating that the Ton may one day tire of the novelty of having black nobility.

I was impressed with this a lot. A bunch of people are very upset about the new Oppenheimer film being primarily a white cast, while some people scream, “The people were white, so shouldn’t the actor?” Shows like Bridgerton however don’t care and look at their success as a result.

Back on topic though of the review. The high caliber of acting, the drama, the set design, and the skill truly show the quality of the people behind the show.

Fair warning about this series, there is a lot of nudity and plenty of sex scenes throughout. While a lot of the show focuses on high-society and the riggers of keeping up personal appearances, the show does delve into the realm of carnal desire and it doesn’t feel like it’s just for the sake of adding nudity, but this is not the type of show I would recommend that you watch with parents or your children.

If you want to catch up on the series prior to the new season, or just want to rewatch the show, you can do so Here, but if you are in Los Angeles and would love to walk in the world of the Bridgerton series, you can do so with Fever’s new event Here! For the starting price of $64 a ticket, you can dance the night away and hope to catch the eye of the Queen.

You can even check out our more in-depth article Here!