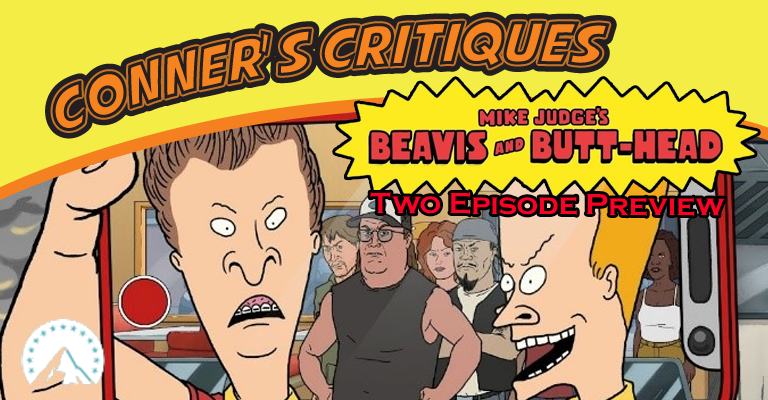 Growing up with Beavis and Butt-Head, it wasn’t a show that my parents would let me watch. I would always sneak down in the middle of the night and watch it. It angered them so much, especially considering how many issues society seemed to have with the series.

However, as a young adult I simply appreciated the humor of the movies, and the situations the characters find themselves in.

Beavis and Butt-Head Do America was an amazing movie for its time period. While Do The Universe was fun, not everybody appreciated that film, you can see our review of that film Here, we definitely enjoyed returning to the world of the troubled pair.

With the influx of streaming services like Paramount+, there’s now a new home for the rebirth and a reunion of several old shows and a lot of new content. We are happy to say that the return of Beavis and Butt-Head is definitely something we are excited for.

So when given the chance to review the first two episodes early, we jumped at the chance! Like all Conner’s Critiques, we’ll cover this review by breaking it down to it’s story, acting, and overall.

The first two episodes consist of a split, allowing there to be technically four stories within the two episodes. The first one starts off immediately in our current time period. Escape rooms are a lot of fun, and they’ve been covered a lot by television shows in recent years. Even Always Sunny In Philadelphia has done an escape room episode. In the final season even Shitt’s Creek did an escape room episode.

While Beavis and Butt-Head do the Universe places the duo in modern times, the show does nothing to explain the change. There also doesn’t seem to have been any change due to the time shift. Tom Anderson and Mr. Van Driessen haven’t aged at all, but exist in modern times now. It seems that the world around them has warped into modern times.

One of the major changes to the episodes though are the mid-videos. Instead of music videos, which barely exist now, the duo watches YouTube and TikTok videos. I was worried at first seeing the two watch a girl’s YouTube video, thinking that they might insult her. Instead however the duo found a way to be funny without making fun of her. I was surprise at how respectful they were. Unfortunately though, not so much to the TikToker who was showing how to make prison tattoos.

At the end of the day it’s Beavis and Butt-Head inserted into modern day events.

The supporting voice characters in the show are not only well animated, but also well voice acted. Hey they managed to take a small bit character and flush out their emotions and create a real figure to the story, when it’s still just a bit character blind reading in a sound booth.

“Mike Judge once again does an amazing job getting into the voices and heads of Beavis and Butt-Head.”

Mike Judge once again does an amazing job getting into the voices and heads of Beavis and Butt-Head. Judge is truly the spiritual predecessor to shows like Rick and Morty. Mike Judge walked into a walk-in-closet so Justin Roiland can have 5 television shows at the same time.

I’m glad that Beavis and Butt-Head is back. It’s a solid show that is interesting for old fans, and hopefully engaging enough for new ones. It’s able to stand on it’s own, while old fans might have trouble watching the episodes from the past. Be prepared though, the show is not for children so topics like fire safety and inappropriate actions are still going to be a problem that will plague this show for a very long time period

I can’t wait to see more episodes, but I have to end warning that we only watched the first two episodes to talk about it. So we have no idea if the show will be able to keep the mommentum in the following episodes, but we are excited from what we saw!