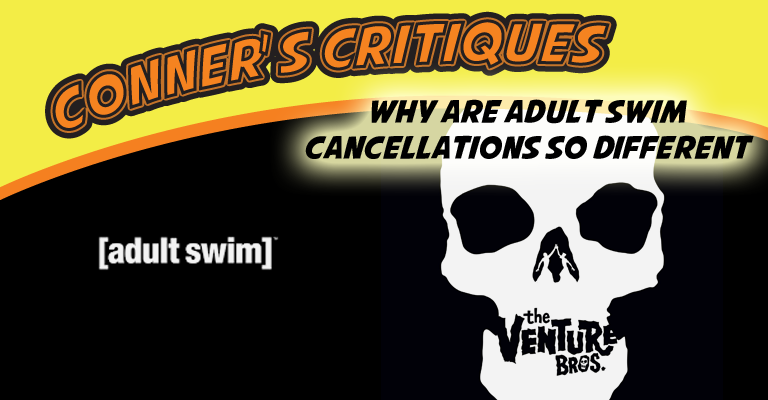 We here at Nerd News Social has been lucky to sit in on a lot of awesome round tables and interviews with the shows at Adult Swim over the years.

Some of the few the site has covered are here:

With recent news, and then shocking confusion by it, of the cancellation of The Venture Bros, we decided it was best to talk about the topic of how Adult Swim works.

Working for Adult Swim isn’t like a normal company with regards to cartoons. It starts off with their short format 15 minute episode slots. With it’s smaller format, a full season viewing in one seating is only slightly over two hours.

From that information, it’s not uncommon for a show to go two to three years between seasons. Also, due to it’s nature, we don’t ever get a hard fast cancellation report from the creators or the network. For the most part, almost everyone we’ve talked to feels like they are always willing to come back for another season, if things align.

Most shows on Adult Swim feature very talented writers, creators, and actors. When a show is good, the group will likely get additional work as a result. Look at the success of Rick and Morty. Which personally stands out from the pack with it’s larges success. Even with it’s success, and specific episode contract, the seasons still have large gaps of two years between them.

We bring this up because news have leaked and been confusing for some people because of the fact that it’s possible that The Venture Bros might be officially over at this point. It’s odd because when we interviewed the creators a couple years ago at San Diego Comic Con, they said that they specifically had plans for an 8th season. The studio has even said that The Venture Bros might not be done, but might not be brought back in the same format. Maybe a movie? Maybe an audio drama? It’s hard to tell, but I’m hesitant to assume that a show on Adult Swim is ever really cancelled.

From all our impressions of every show, and it’s long running series it seems cancellation isn’t on the table, but often joked about. Robot Chicken has been making the joke of them being cancelled for years. Though in spite of the jokes, shows seem to love working for the network, and the loose “are they cancelled or taking a 5 year break” mentality has allowed creators to work on the projects, while allowing them to take the time to make the seasons as good and original as possible without forcing the story. It’s likely why the shows are so good, and insane at times.

So what does it all mean? While the creators and the network slightly differ, it means don’t count a cancellation as a fact, since as long as the creators are down to return, and they have a great story, Adult Swim will be a venue for these amazing shows.