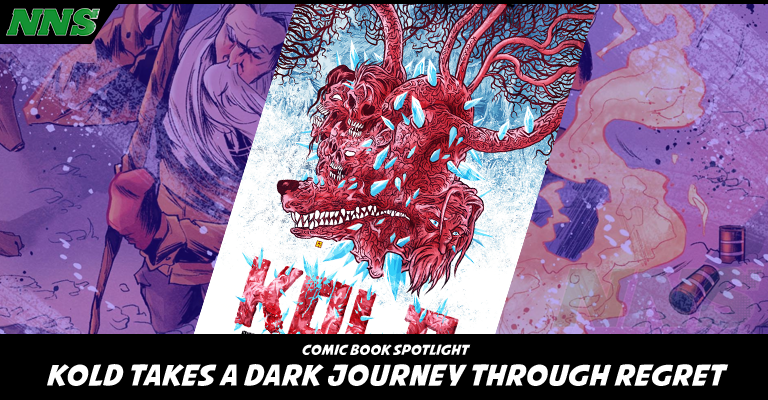 One-shot comic books are a great place to get amazing short stories, unique concepts, and to really touch the style of the comic creator.

With this one-shot called Kold, by Source Point Press, you get a unique story written by Michael Patrick Rogers with art by Federica Mancin.

So let’s jump into why I think Kold is a unique story, and see if you would want to pick up this story for yourself.

The story takes place on top of a cold hill with two characters. An old man and his aging dog. The old man is excited to find a choice secluded fishing hole to spend the last minutes of his life. While at the fishing hole though, he is visited by the specters of his three dead ex-wives.

In his final moment, he is forced to confront his failings and their effects upon his relationships. He delves into his intentions, his behaviors, and the effect it had on the people around him, whether he intended them to or not.

The problem with one-shots can generally be that they are not given enough pages, and as a result they can come off as short. While there are definitely some scenes in this book that I feel could benefit from an extra page here or there to delve into the story a bit more, this book generally is a solid open and closed story. It’s able to gets its point across without the need for a lot of fluff.

I want to warn though, that for anyone that has had to deal with being cheated on or has been in abusive relationships in the past, this might not be the best story for you. Those topics are heavily talked about and delved into within the story. Also there is quite a bit of grotesque body horror mixed with some nudity. So don’t plan to read this book on public transportation or around the family.

If none of those issues are deal breakers for you, then I would definitely recommend you pick up this story.

Kold comes out on August 24, 2022, so keep an eye out for it at your local comic book stores, or pre-order it from them now!