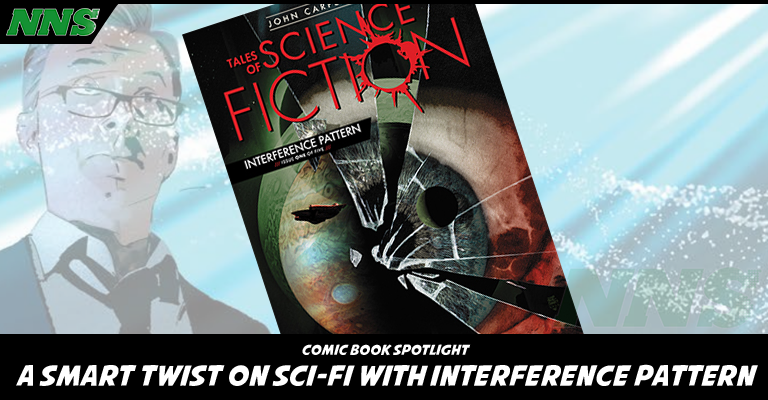 We love high concept sci-fi as much as the next nerd. However, one medium that doesn’t ever really get it right, and can be a little bit difficult to do so, is comic books. A lot of times, due to the need for brevity, Sci-fi just comes off meh.

One company that doesn’t shy away from high concept sci-fi however is Storm King Productions. Their newest title Interference Pattern by Dennis Calero continues to break the mold.

We wanna start off by saying that we’ve known Dennis Calero for several years, had the good fortune to interview him, and have spent time with him personally over the years. I can say however that I did not honestly know that this was his story when I read and review this book. After the fact, I found out that the comic was written and drawn by Dennis Calero.

Mankind is working on “Faster Than Light” travel, or FTL as it’s been called. While they’re able to allow the ship to travel faster then light with no problems, the living matter within the vehicle can only last 1 or 2 trips before, for some reason, it is horrifically scrambled.

While he is being questioned by his superiors, Nestor is at the end of his wits. Nestor then turns to his old science partner David for help. This prior partner David has an interesting theory about interference patterns, and how they are not quantum states of particles. He believes it’s the interaction with it’s corresponding particle in other dimensions.

Nestor proposals that David help him adjust his FTL technology to overcome the horrors of his device. His thought, that by instead of just traveling faster then and light, and in part traveling to a different dimension. His belief being that even if the pilot ends up in a different dimension, it will be a near identical dimension while the pilot from another near dimensional world will enter into ours acting almost as if they travel faster than light.

Before the two can get the science to work, David has to ask himself if he is willing to give up the life he knows, just so he can confirm that his theory is correct.

The story is gruesome early on, but has the backbones of high concepts of sci-fi and the beautiful art of Dennis Calero. While this is only the review of the first book, it does a great job pulling you into the world and makes you want to see more.

You can pick up your own copy of Interference Pattern Here!