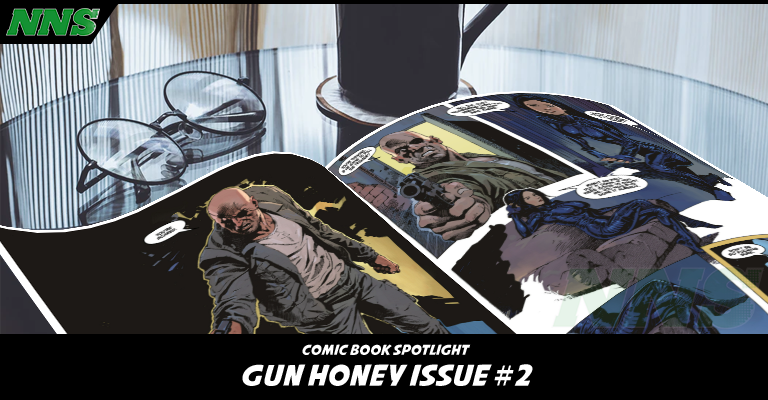 Ready to see what we think of the second issue in the Gun Honey line? If you haven’t read the first review, then check it out Here. Once again, if you like crime novels, and crime graphic novels, then this series will be right up your alley.

The print is from Hard Case Crime, Titan Comics line-up of more serious crime-based stories, that feel more like the suspense novellas of yesteryears. So let’s jump into the second issue of this series!

After getting caught in the act of planting a gun, Joanna discovers that the job was more of an audition. Now that the mark has her attention, he sets her up for the real job. Joanna has to sneak a gun into prison, so her client can take out the man who killed his brother. A criminal who is more than he seems to be. Joanna doesn’t care though, it’s just a job.

A job that she is very good at. She then uses her looks to seduce and steal the identity of a female guard at the prison and the gun is planted without any issue. The issue follows after though when a hit doesn’t go to plan, and Joanna has now armed a very dangerous man.

Now her client and all his men are dead, and the murderer knows it was Joanna who planted the gun.

It’s interesting how the job goes south, and how the hunted kills his would-be assassins, but the most interesting thing is that the villain appears to be burned. I’m guessing the backstory of Joanna’s family dying in a fire might play into the identity of the killer. We will have to wait and see though how it plays into the story.

What happens next, how will this play on Joanna’s conscience? We’ll have to wait until the next comic to see. You can pick up the second issue Here!