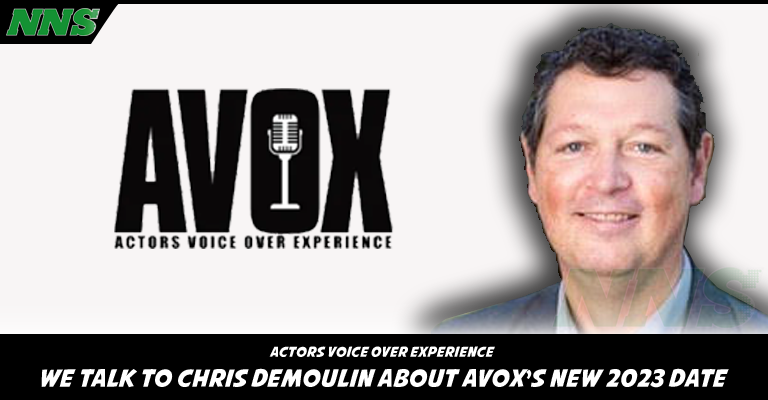 The massive and impressively planned voice over convention AVOX was planning to run their inaugural event July 2nd and 3rd next month, but issues conspird to prevent the fun to occur. Unfortunate issues with studios and conflicts with their talent caused problems for the very voice actors the event intended to support and appreciate.

With that in mind, and the request of 85% of the prospective fans polled about the event, the convention has decided to re-schedule the event for Spring 2023.

As we’ve wonder how we got to this point we thought it best to check in with our friend Chris DeMoulin CEO of Comikaze Entertainment, Inc, and one of the partners organizing this event to see if he can give us a little more insight, and what we can plan for 2023!

Eric Bryan Seuthe II: Hey Chris, as always a pleasure, but I have to be honest I wish we were talking about something a bit more positive. Just to jump into the elephant in the room, July is an incredibly busy month for conventions, did the anime conventions, and other major conventions around that time play a factor in rescheduling?

Chris DeMoulin: Absolutely, yes. Some of the game publishers and talent who were initially supporting the AVOX event developed conflicts. Rather than fight against that, we thought it made more sense to move to spring dates that all the key stake-holders could support. We also did some fan research, and the fans were great – most said that they’d be equally excited to come to the event next spring.

Eric: I know moving a convention especially this close to the event is never something anyone wants to do, but was this something you knew was coming but were hoping would be resolved?

Chris: Exactly. Both my co-producer Keith Arem (the CEO of PCB Entertainment) and I were working toward resolving conflicts, but around Memorial Day we began to suspect that rescheduling made more sense than pushing through with the July 2-3 dates.

Eric: Due to the shake-up and date change, I’m sure people lined up for the convention still want to attend, and Spring is a far enough date to make arrangements, but will the line-up of participants and guests still be the same in Spring 2023?

Chris: I’m sure it won’t be exactly the same, but the talent were amazing – disappointed but fully understanding and supportive – and we expect that most of them will be with AVOX in the spring. More importantly, we’ll have the full line-up of support from the game publishers and anime producers that will really make the event special and memorable for the fans.

Eric: For people planning their time, can we get a ballpark month in spring?

Chris: We’re not quite finalized, but it looks like May. We’ll know for sure in a few weeks, and announce the new dates.

Eric: We want to see AVOX become a regular convention because Voice Actors need a dedicated event focusing on their talent and dedication, so if and when AVOX announces their second convention can we expect to see the event being run in spring annually, or is this new date a temporary placeholder?

Chris: The intent is always to find a date that you can stick with – for the fans and the talent to be able to plan around. So I’d say yes – if we get the positive response we believe the show will generate, we’ll work to keep the dates as consistent as possible. We also love the Pasadena Convention Center campus – for those who haven’t been, it’s only 10-15 minutes from the L.A. Convention Center, but it’s an oasis of trees and lovely buildings, ample parking, great restaurants. It’s a terrific location for a fan event.

Eric: You mentioned that fans wanted to see the format adjusted, and you guys will tune that, what were some of the changes you guys are considering?

Chris: I think mostly around ticket types, and scheduling. AVOX has some unique features – not just panels, exhibit booths and autographs, but also a live Game Show, cast readings, a live Gaming stage, and other smaller, more interactive features. The fans want to make sure they have the time and the access to do everything!

Eric: Well we know it’s not easy, but if this was the thing that had to happen to make sure AVOX is a success we thank you for making the hard choices and we can’t wait to see the convention back with a hard date for its first event!

Chris: Thank you as always for your interest and support! At the end of the day, we want to put on events that the fans will love, but that are also fun and user friendly for the talent, the exhibitors and the producers and publishers. The AVOX idea is special, we just needed to get it into a different time slot to allow it to thrive. We look forward to seeing you at L.A. Comic Con in December, and Keith and I can’t wait to welcome everyone to AVOX next spring.

The event will be held still in Pasadena in 2023 and if you want to keep yourself up to date, then make sure to regularly check back in on their Website!