Finally out this week! A brand-new group of teenagers get lost on a school camping trip and are transported to the world of Digimon. Can you survive this strange new world? 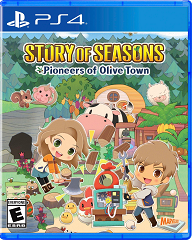 Story of Seasons: Pioneers of Olive Town by XSEED Games

Releasing now one the Playstation 4, you too can leave the hustle and bustle of big city life behind! Pack your bags and venture to Olive Town where you’ll take over a farm and meet a host of unique characters.

Join Noah and Mio, two people on the opposite sides of waring factions as they attempt to end the cycle of violence and conflicts that plague their colonies.