R-Type Final 2 by Koei Tecmo
Jump back into the legendary shoot-’em-up, R-Type. This new installment keeps the colorful visuals and energy of the original but ugrades the graphics to 3D with new modern age features. Whether you are new and old to the series, it’s been designed to suck you in! 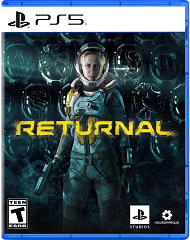 Returnal by Sony
Part Metroid, part Dead Space, this roguelike game will give you a different game each time, forcing you to truly explore combat options and approaches in this sci-fi survival game, where death is no escape, as you just start over your attempt to survive again and again.

Snap is back and better then ever as you will seek out taking pictures of Pokemon in their native environments! Can you discover the secret behind the Illumina phenomenon of the Lental region? Fill your Photodex!

WRC 9 by Maximum Games and Nacon

WRC 9, now on Switch. This game is approved by professional drivers and the WRC Championship. Race through Kenya, Japan, and New Zealand with 15 different legendary vehicles! Race, alone, with friends, or in online championships. You can even build your own clubs. When it comes to racing few are able to produce as amazing an experience!