Moons of Madness by Funcom
Who has sixteen tentacles and loves Lovecraft? THIS Guy! It’s space. The red planet is sending out creepy signals. But from who! I dunno! No one does! And it’s too weird to tell the general public, because it’s the government and they keep secrets. Where did my tin foil hat go? So the government decided to start up this super secret project to figure out the origin of the message from Mars. Enter you. Shane Newehart. Space technician. You’re out here, but your clearance keeps you in the dark about this signal. You’re just the guy keeping the lights on for when the real heroes arrive. Soon, your stuff starts to malfunction without any discernible reason, and in really unusual ways. To make things worse, your solitude is causing hallucinations — or are they? This game is an immersive look at a man’s descent into madness and paranoia, drawing on real-world experiences that are caused by prolonged isolation, as you attempt to solve puzzles and navigate your surroundings despite these setbacks.

One Piece: Pirate Warriors 4 by Bandai Namco Entertainment America Inc.
In the forth in the series of One Piece’s Pirate Warriors, they boast a bigger story, bigger environments, and crazier moves! Rejoin Luffy and travel to different islands searching for treasure, the One Piece. Fight large groups of enemies and destroy buildings with your attacks. 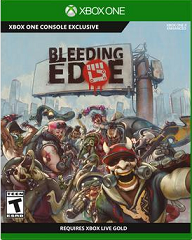 Bleeding Edge by Microsoft
An online team fighting game where you battle monster to monster in cyberpunk arenas. Check out their list of characters with saw blade arms, to those wielding electric guitars, and some of the most insane character design in existence. It makes Borderlands look tame. Game requires online access, and Xbox Gold membership to play.