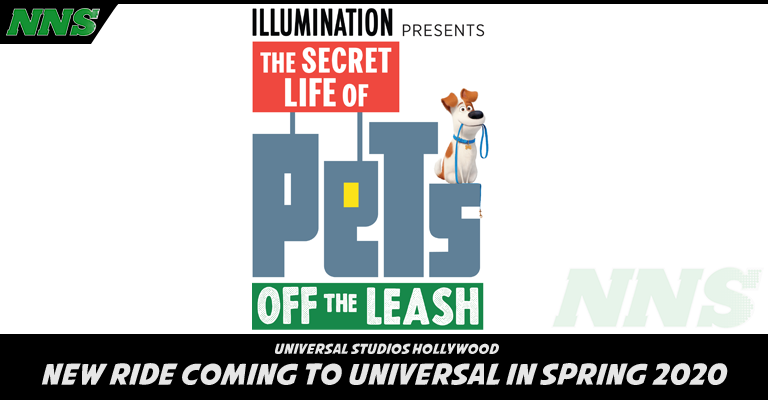 Universal Studios Hollywood’s is bringing a new ride to the theme park, “The Secret Life of Pets: Off the Leash!”

The ride is coming out in Spring 2020, and will focus on the main concept of the movies, “What are your pets really doing when you’re not at home?”

To help make the ride as awesome as the movie, the voice cast from the movie are returning to reprise their roles! That’s right Patton Oswalt, Kevin Hart, Eric Stonestreet, Jenny Slate, Tiffany Haddish, Lake Bell, Dana Carvey, Steve Coogan, Chris Renaud, Hannibal Buress, Bobby Moynihan, Jessica DiCicco and Tara Strong are all coming back to the studio to record new dialog for the ride!

The ride will focus on the concept of adoption day, a rite of passage for pets around the world. Guests will enter into a vehicle which will resemble a cardboard box. Through the experience, the theme park will use facial recognition and gesture cameras to display the riders back to themselves as puppies, so that they can be fully immersed in the experience. As they are brought through a mixed media ride, merging animation, video, and physical sets inside the ride, to match the construction outside of the ride taking over the previously named Baker Street.

Thats the sad news. As a long time Universal Studios fan, we will be losing baker street, as the British themed area of the park is removed to make way for progress. The prior structures will be removed, and new facades will be installed to look like a New York Street, and subway station.

This will be more of a fun experience for the younger attendees of the park.

If you’ve been wanting to get your chance to work for the theme park, and have the energy needed, you too could be a part of the Pets experience, as they need actors to puppet, and impersonate the voice of Snowball! This tells us that they will likely have an experience similar to Donkey, and Megatron. So if you want the role, maybe you should give it a try?

Book your auditions directly Here! We’ll see you at the park!