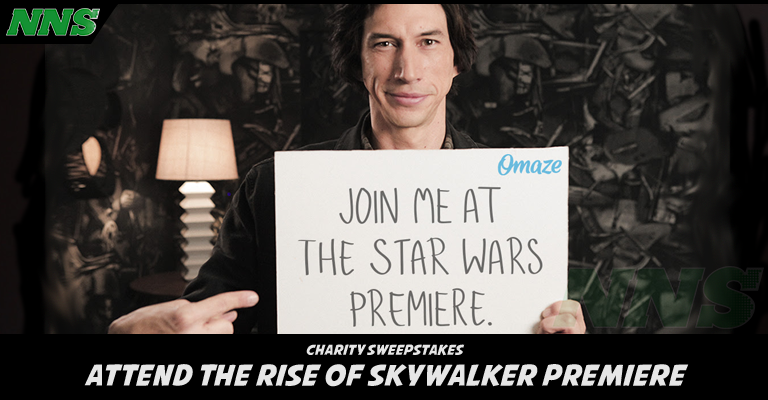 As we said with regards to the Daisy Ridley raffle, findable Here, Star Wars has been a powerful force in the Galaxy, uniting or forcing apart nerds throughout the fandom. From Ewoks, Slimmed Down Jabba, or the Gungans. But don’t fret, no one is going to CGI a walkie into your hands with this new raffle from Omaze.

After 8 movies, the series promises the end of the Skywalker storyline, but conversely titled the 9th film “The Rise of Skywalker”. Now after Daisy Ridley, announced her she was giving fans a chance to be one of the first people to see the new film in the series, Adam Driver couldn’t let the fans escape without being tempted to the dark side of the Fandom.

Donations for this raffle will support AITAF.

More about AITAF:
AITAF was Co-founded by Adam Driver, and stands for Arts in the Armed Forces. This charity provides high-quality arts programming to active-duty and veteran members around the world.

Hurry up and enter the charity raffle Here, because the raffle ends on December 1, 2019.

Omaze promises though that this is one of many Star Wars themed raffles they will be throwing, so if you didn’t use the promo code we told you about earlier, this is another chance for you to use it to gain a one time set of extra entries!

Use JEDI150 for 150 bonus entries, but you can only use it once, so choose wisely!