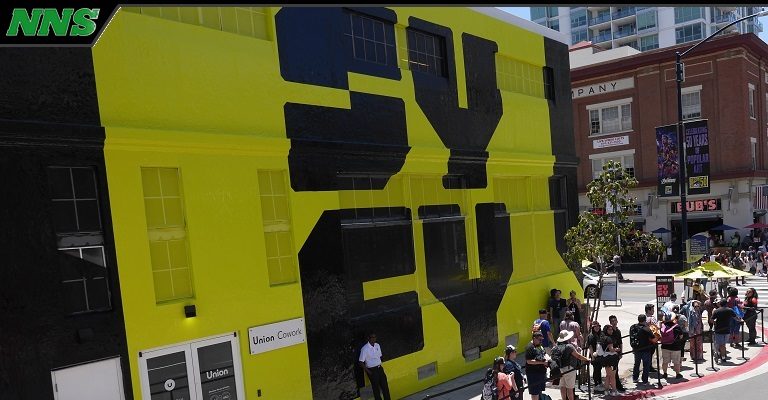 As usual SyFy came back to comic-con and had a lot of fun and interesting opportunities for its fans. During the convention SyFy offered three main events. Bringing back the successful Karaoke Bus, a Trivia Trolley, and the much loved SyFy Drum-line featuring Orlando Jones in all his glory.

I had the opportunity to jump onto the Bus and Trolley experiences, so I can share with you the fan excitement. SyFy ran the experience this year on Friday July 19, and Saturday July 20.

SyFy took over J street in the Gaslamp District with a rousing and fun “fan first” experience. I couldn’t help but make the the karaoke bus my first stop. Once I arrived, SyFy was able to place me on the next bus, and it was awesome to enter the bus so quickly! Right when you enter the bus, you are treated to amazing service. You are greeted by friendly staff, who offered you free water and SyFy sunglasses. These are needed for when you get to go to the top of the open air bus. A Short flight of stairs later, and I was on top of the bus. What a beautiful view as you drive through the Gaslamp district. Once the bus is fully loaded, all passengers are handed a sign in sheet. On the sheet you are invited to write your name and the songs you want to sing. Once that’s done and everyone is safely seated off the bus goes, music blaring!

The bus isn’t just loved by the passengers, as people on the street got excited as well, with pedestrians waiving, and dancing along to the music. Other cars who endured the chaos of driving around the convention would honking to show support to the passengers having a fun time. During the experience, the bus follows a specific and repetitive route around the block. So if you wanted to see people partying, and singing, you could really just stay and once place and wait for the SyFy Karaoke Bus to pass again.

However, for the passengers, you got to relax and enjoy your cool water bottle, SyFy sunglasses, and a nice breeze, while waiting for your turn to sing, but not everyone gets a turn. The bus staff allows 3 to 5 people to sing, chosen at random from the sign in sheet that was turned in before leaving the station. This time is limited by the route the bus takes. If you are lucky enough to be chosen to sing, the staff takes a photos of you on their tablet and creates a motion graphic of your singing, which you have an option to email to yourself when you finish.

Once the route has been completed, the bus pulls back into the stop, and the staff ushers the current riders off, allowing a new group to experience the SyFy Karaoke Bus! If you didn’t get a chance to sing, you could have always got back in line, and wait for the next bus. 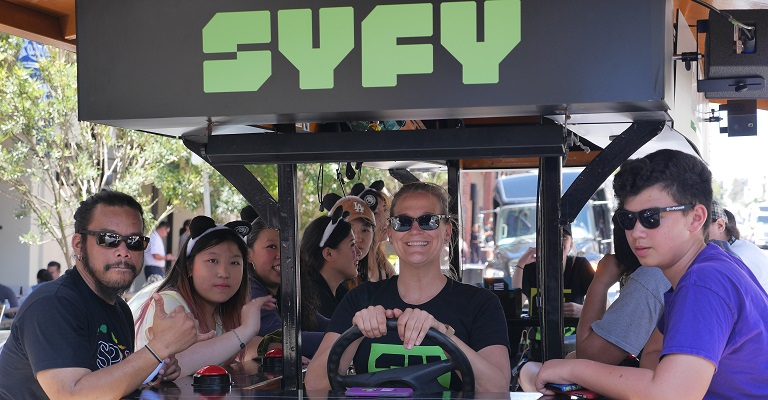 The trolley was probably my favorite experience that SyFy held this year.

While waiting for the trolley to return, the SyFy staff has riders sign a waiver, and ques the groups into two separate lines. The trolley allows for 12 riders at a time; 6 on one side and 6 on the other. These are the competing teams. The staff did a great job managing parties, and grouping people together so that parties would not be split or separated if it could be avoided. When the trolley enters the stop the 12 riders are loaded up, and seated in their respective side.

This trolley, like other convention events in the past, has no traditional engine, and must be powered by the pedaling of the riders. While there were 12 riders, only 10 had pedals, so if you are unable to pedal, you could always aim for that seat. Of course SyFy also had a driver on the trolley to steer, and manage the journey, so that the experience would be awesome, if not controlled. We don’t want convention goers getting into a collision. On the opposite side of the driver, there was an official SyFy host. The host made sure everyone was strapped in with their seat belts, and informed the riders of the rules:

The questions were ranged from easy to hard, and all riders had buzzers in front of them, that would send out a victory sound through the trolley’s speakers. You got to push the buzzer if your team answered a question correctly. This let the pedestrians of the Gaslamp know that you were beating the other team.

It was a fun communal experience to nerd out, with questions in true nerd fair, ranging from Lord of the Rings books, to facts from Back to the Future. All in the amazing weather of the convention. But all good things had to eventually come to an end, as the trolley pulls back into it’s station. Once you arrived back, the staff would tally the points, and the team with the most points won the prize. My team won, and our prize was $20 dollars for each person on the winning team.

We only hope that SyFy brings back these experience next year!