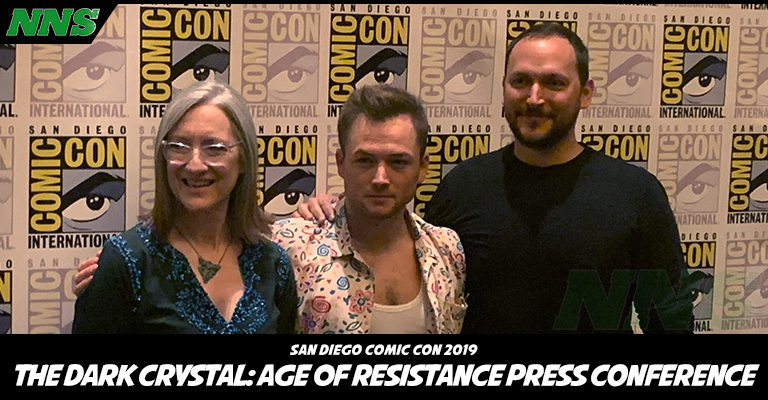 The Dark Crystal is a 1982 puppet animated dark fantasy adventure film directed by Jim Henson and Frank Oz. 37 years later on August 30th, we will finally get the prequel to the beloved fantasy film! Henson’s daughter Lisa – who serves as CEO of The Jim Henson Company – and director Jim Leterrier have teamed up to put together a 10-part Netflix series, which explores the fall of the “Gelfling” community, through some masterful modern puppeteering.

In the original 1982 film, we were told a story from another planet in the distant past about a Gelfling named Jen who was raised by the noble race called the Mystics. Told that he is the last surviving member of his race, he sets out to try to find a shard of the dark crystal, a powerful gem that once provided balance to the universe. After the crystal was broken, the evil Skeksis used sinister means to gain control. Jen believes that he can repair the dark crystal and bring peace back to the world, if he can only find the remaining shard.

For the prequel, which will be using classic puppetry with cutting edge visual effects, the story will explore the world of Thra created for the original film and will follow three Gelflings – Rian, Brea and Deet – who inspire a rebellion against the Skeksis when they discover a horrifying secret behind their power that threatens their world.

While at San Diego Comic Con, we attended the “Netflix Presents: The Dark Crystal: Age of Resistance” press conference with the director Louis Leterrier, executive producer Lisa Henson, and one of the main actors, Taron Egerton who plays Rian, a Gelfling crystal castle guard of the Stonewood Clan.

Henson was very excited to answer one of our questions. We just had to ask if any of the original props or character puppets will be used in the prequel. She answered:

The puppets are incredibly fragile and most of them are in the Museum of the Moving Image in NY and the Center of Puppetry Arts in Atlanta. And we had a few that were not yet restored that were in our creature shop. And in the process of building new characters, our shop started by copying the old ones because it got them going and they took off from there in building the new characters. So it was actually really interesting being able to access the old characters. I’ve been wanting to make either a sequel or prequel to this for a long time. That when we closed our creature shop in London, which is where everything was stored, even though they were inclined to get rid of certain ephemera of a work shop of things that didn’t have to be kept, I wanted to keep everything with The Dark Crystal because I knew were were going to do something with it some day. And as another tie to the past, it was important that we had Brian Froud who was the original designer. He came back and he designed every character, every costume. And we have his family, Wendy, and Toby Froud (the baby from the movie Labyrinth), so we have the Froud D.N.A. from the original film. That is our design team for the show.

We learned a lot of things from the press conference. Below are a few points of interest.

We are very much looking forward to seeing this series! Especially with knowing some of the other voice actors are Mark Hamill, Keegan-Michael Key, Benedict Wong, Simon Pegg, Helena Bonham Carter, and Eddie Izzard to only name a few. Check out the trailers below for a visual look and let us know what you think of the original movie and the prequel in the comments!

Behind the Scenes Sneak Peek