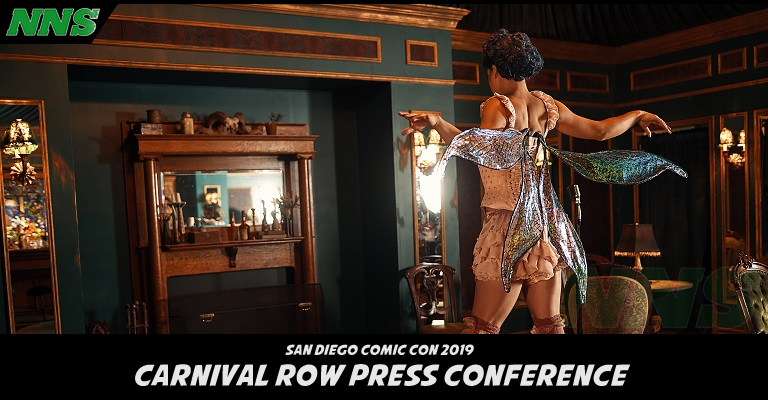 This year, NNS was given the opportunity to sit in on the panel for the upcoming Amazon Prime show, Carnival Row. Here is a run down of what we experienced and what was revealed about the show from the cast and writers. There is a patter of hushed and settling equipment as the room prepared for he conference, and one by one our panel of guests are introduced. After everyone was settled and seated, Orlando Bloom joked that someone had left their cellphone on the table; there were dozens of recording devices in front of him.

The first question asked was, “How does a show so socially relevant affect how the cast approached playing their character for this show?”

Because of the fantasy world building, they were able to examine the tragic and depressing situations that happen in real life objectively. Their best advice to prepare for a role like this is to go out into the world and listen to the life stories of other people to help develop perspective on situations in life.

The next question asked “To expand a little more on the topic of the first question, in how the cast thinks that a show like this can be digested by the audience, in a way that the message can be applied to the current real life situations that are happening around them?”

They stated that it was important that art got a chance to get people to look at issues and discuss issues. It doesn’t necessarily need to do more than that. One cast member felt that many of the problems in society today is that we don’t talk about things anymore; it is considered rude to discuss things like politics, and as a result we place ourselves in bubbles. The nice thing about art is that it can, hopefully, jumpstart some of those conversations. It would be ultimately healthier for society.

They continued that in writing and shooting, one of the themes of the show is wrestling with the issues of the time but in a way that is personal, in character; it tells the story of struggles people go through, through specifically struggles of an individual character and the view of a human perspective. Storytelling in general is a bit like activism in finding what is the story of the other, whether it by gender, race, or by place of birth.

The were next asked “What was the feeling the first time they walked onto the sets?”

They were overjoyed the first time they got to walk down the set for Carnival Row and see the level of detail put in. They could walk into a shop and look around and were wowed. They loved the carvings, textures and details. One of the casts’ favorite details was an old barber shop sign that illustrated haircuts for humans, but now drawn over to show the traits of fauns and faeries physical attributes. The set really felt like a historical fantasy playground that they all got to enjoy and play in.

The next question asked them “What is something that will be exciting for the audience to see in each of your characters?”

They are excited for the audience to experience the multi-facets of the female lead and the complexities of her personality.

For the male lead, they were excited about his challenges with secrets and balancing the perceptions of masculine behaviors and empathy. They were also very excited about the topic of class or hierarchy in the world as it is portrayed through the experiences of a faun, who is well off by economic standards, but shunned by his economic (human) peers.

The next questions asked them,

The general reply was that the authors they would choose would likely shift from day to day, but Shakespeare got a clear first nod. The writer of the show jokingly waved his hand and pointed out he was sitting right there. They like authors who paint pictures and create textures to their stories; who really transport the reader.

The next question asked, “What do you think about the future of Amazon Prime and film, ie the future of the kind of platform it provides to the viewer here and on a global level?”

They responded that, firstly, it crazy how much TV has changed from when the first shows they had worked on were done. When they worked on creating Carnival Row, they weren’t thinking about it being on a regular TV channel. They were focusing not on the local market but a more global market for streaming because of the story they wanted to tell. They felt the show was a global story written from a global perspective.

They then brought up the topic of nudity and how that can be part of the story telling in a strong way. Spoiler Alert, there is nudity.

On the topic of format, both film and TV have their own unique story telling challenges in how much time you have to explore the characters, their environments and their development and interactions. TV used to be viewed as the little brother to film, but it has really grown into its own.

The final question we asked was, “How many seasons are there going to be and how inspired by real life events going on now, ie: the refugee crisis?”

They tried not to hit anything so firmly on the head that it is clearly referencing specific events. They didn’t want the story to be like Animal Farm where you can pick out who each character represents. They took a broader approach of issues that challenge society and describing how actions and counter actions arise; how one part of society affects the other and how that affect goes on and on.

The story is reflective of its own time, but also transcends into modern reflection based on different groups of people around the world experience today. Its ability to capture relevance to today while staying true to the time period is the real magic behind the show. It is authentic in how it portrays the issues and even though it is set in a world where there are faeries and fauns, the ideas are tangible to the audience enough to identify with the struggles even with just an outsider perspective and relate to them in a way that might be harder to do if the characters were all humans. It is a message that is woven into the story in a subtle way.

And with those last thoughts on the topic, the panel closes with thanks to the audience for their questions and thanks to the guests for their time and insight to the show.

We here at NNS are looking forward to the story that will be revealed when Carnival Row launches on Amazon Prime, Labor Day Weekend. 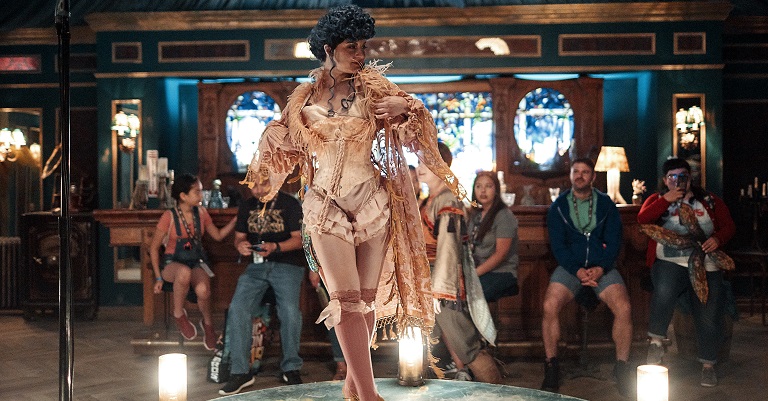