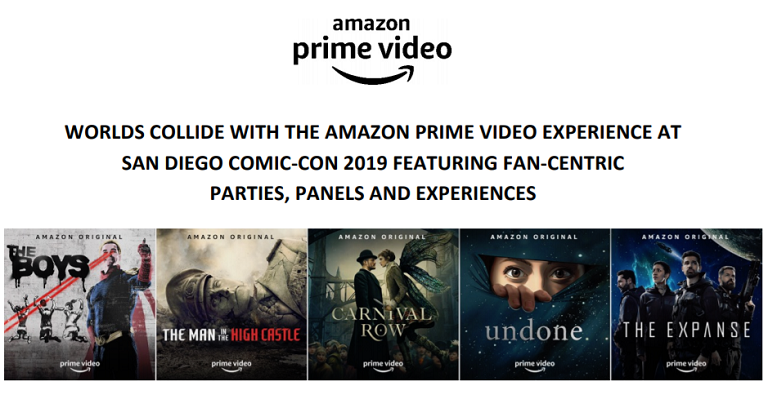 To show off some of these videos, Amazon has taken over a large chunk of San Diego Comic Con, with the intention of giving back to the fans that make their company possible. So if you were looking for something amazing to do this week in San Diego, come check this out!

For the week of Comic Con, there will be the Amazon Prime Video Experience right next to the convention at the corner of MLK and 1 st. This Experience will include so many options! We are talking about a massive 60,000 square-foot activation!

The Experience will also feature a 40-foot tower with screens playing clips from The Boys, Carnival Row, The Expanse, and live performances.

Be Transported to the worlds of The Boys, The Expanse, and Carnival Row. These activations will be immersive, and include live performances. Just for making it inside the experience attendees will receive collectible coins, which they can use inside the activation, or horde as a collectible. There will also be food and drinks from Carl’s Jr and a professional photographer on site for the attendees of this awesome experience!

Not interested in activations? How about Parties and Premieres?

Amazon is again hosting the IGN Official SDCC Party. This year the theme is The Expanse. Fitting with the theme the party will feature cosmic cocktails and food that is “out of this world”. In attendance will be some of the cast of The Expanse. While the time has not been announced, it will take place on Thursday, July 18, at the Amazon Prime Video Experience.

There is also the The Boys: World Premiere Fan Screening and Party, where guests will party with the creators and cast of The Boys for an exclusive sneak preview of the first two episodes. This will take place on Friday, July 19 from 7 p.m. – 11:30 p.m. at the Amazon Prime Video Experience.

Lastly Amazon is bringing the Carnival Row: Come As You Are Party to celebrate the conclusion of the 50th San Diego Comic-Con. Amazon will have people dresses as characters from Carnival Row, and you can expect a sneak peek of the series. This will take place on Saturday, July 20 from 7 p.m. – 11:30 p.m. at the Amazon Prime Video Experience.

That’s not all though. Amazon is bringing Panels which include the cast and creator of shows.

See you at the convention!