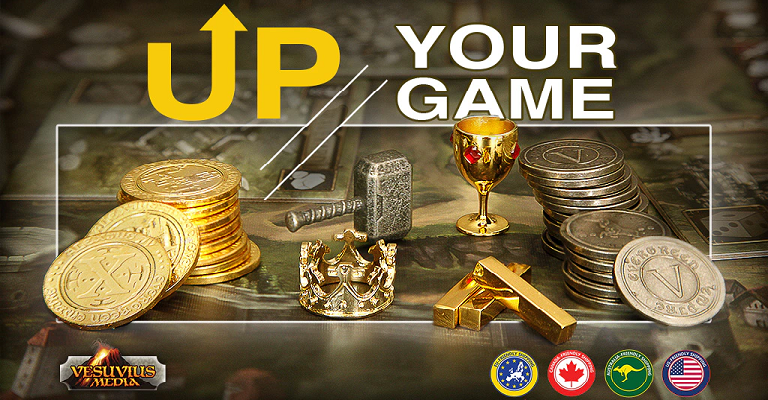 Are you an avid gamer? Do you find yourself board of cards, and lack luster cardboard punches for resources? Well Vesuvius Media Ltd has you covered with their new Kickstarter, Up Your Game!.

The creative team said that they wanted to create something to help players feel more immersed in play. To that end, they’ve taken some of their components from Nocturion, which their backers loved, and are using these deluxe components to help you improve not just their game, but any game!

This Kickstarter has many awesome items that you can get to add an extra level of style to your games. For currency, they have Bronze, Silver, Gold Coins, as well as a multi pack for a bit more, but it’s cheaper to buy as a pack then individually.

They have player tokens, in the form of Crown, Chalice, and Hammer (like Thor’s Hammer).

Lastly, the coolest thing they have, is resources (for when you are playing Catan!), Wood, Stone, Gold Bars, Crystal Balls, Bows, and Swords!

Social Goals
Social Goals for this Kickstarter include a Heart, Clay Brick, and Meat. At the time of writing this article, the heart has been unlocked. If you want to help out the backers, you can go and like the company on Facebook Here.

Stretch Goals
Stretch Goals for the Kickstarter include an Hourglass, Bag of Wheat, and Metal. At the time of writing this article, both the Hourglass and Wheat are unlocked, and hell it’s so close, the metal might already be unlocked!

They plan to announce more Stretch Goals as well, so help spread the word, to get more items for people to get!

Pledge what you want, but don’t fret if more comes down the line, you can always increase your pledge and double the quantity you want later during the pledge manager at the end.

To help them ship these items around the world on March 2020 (their projected ship date), they have partnered with GamesQuest in the UK, VFI in Asia and Brazil, the awesome cafe Snakes & Lattes in Canada, QuarterMaster in the USA, and Happyshops everywhere else. It’s nice to see a company do this to help avoid larger costs for shipping.

It’s important to note, since some people don’t notice these things, the prices here does not include shipping, that will be decided later, since you can increase your pledge.