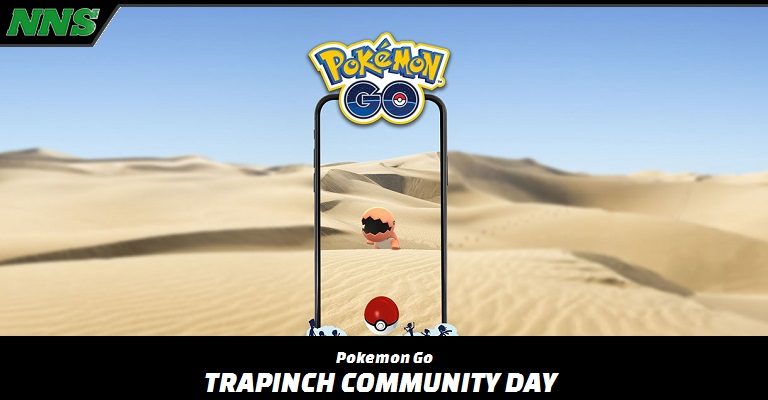 October’s well and truly here, Trainers! And you know what that means; A brand new Community Day! This month, we’re going to be swarmed by multitudes of the Ant Pit Pokemon, Trapinch. Fitting for Fall, don’t you think? Round, Orange and with a zig-zag Jack-O-Lantern looking mouth, apart from a Ghost Type I think this is the most fitting of Pokemon for the season.

This event takes place on Saturday, October 12th from 11:00am to 2:00pm local time no matter where you are in the world.

What other treats are in store? So glad you asked…

So, what’s up with this little, orange Pokemon? Let’s check it out. 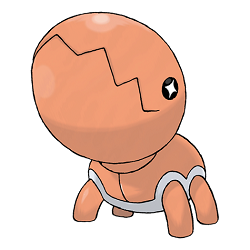 Trapinch was introduced in Generation 3s Ruby, Sapphire and Emerald games. It was one of the critters you could run into on Route 111, in the middle of which was a desert where you needed Go-Goggles to … well. Go. It was notable for having a MASSIVE Attack Stat. Not even kidding, it appeared to be a titan among base forms (Base Stat for Attack on this Pokemon is 100 in the main series games. For context, that’s the same as Mew and Nidoking. Not something you’d normally find for the first stage of a three tiered evolutionary line.) and it could chew its way through a lot of the enemies in the game while still fresh caught.

The Pokedex tells us that Trapinch, a pure Ground Type, digs a conical, funnel shaped nest and waits for prey. Anything that falls into this pit cannot escape and…. wait. Where have I heard this before? 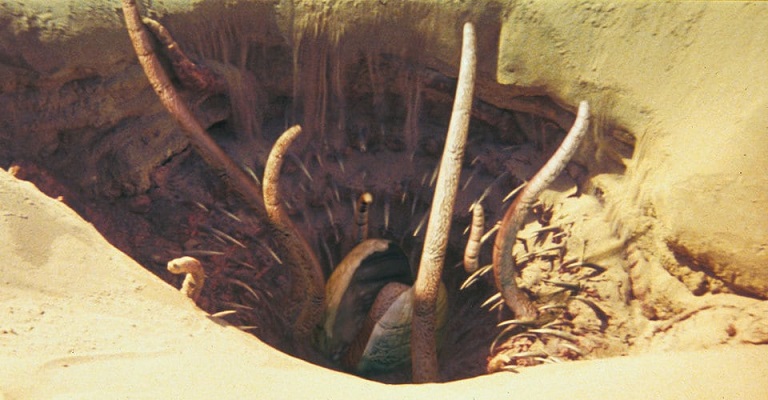 I am immediately naming any that I catch Sarlacc. Anyway, it’s a patient hunter who can go for a week without so much as a scrap of food or drop of water. Those giant jaws are powerful enough to crush boulders, but that makes its huge head so heavy that if it falls over on its back it has a hard time getting up again. Sandile use this opportunity to make a quick meal of them.

When Trapinch evolves into Vibrava, our prince reverts into a pauper, with its Attack Stat actually going DOWN from 100 to 70. Once it evolves into Flygon, its third and final form, that Attack Stat goes back up to 100.

Flygon itself is a Ground/Dragon type and known as The Spirit of the Desert. We’re told that the flapping of its wings sounds like beautiful singing and it often lures people and Pokemon to be lost in the wastes in search of the song’s origin. It generates a sandstorm as it flies through the desert which protects it from enemies…. and hides a sinister secret; Krookodile. The Krookodile hidden in this roving dust cloud will attack prey and then split the spoils with Flygon. Teamwork makes the dream work.

So, how does The Spirit of the Desert stack up in Pokemon GO? 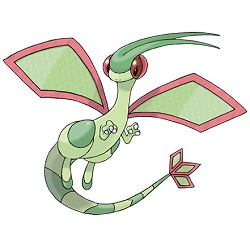 With a Max CP of 2661, Attack of 205, Defense of 168 and Stamina of 190, this Pokemon is mid-tier and limited use. There are just so many better Dragon Types and Ground Types both that this Pokemon struggles to find purchase in a saturated metagame where both of those Types are already abundant. Garchomp finds this Pokemon hilarious.

Its movepool is Dragon Tail and Mud Shot for Fast Attacks and they’re both STAB with Dragon Tail being the more DPS heavy option. Charge Attacks are Stone Edge (Safely ignored.) and for STAB you have Dragon Claw (Your best option) and Earthquake (Also good.)

Being Dragon/Ground this Pokemon is double weak to Ice Type moves, with standard weaknesses to Fairy and Dragon Type moves. It is doubly resistant to Electric Type moves with standard resistances to Fire, Poison and Rock.

Shiny Trapinch is a dark teal instead of its usual terracotta orange. Flygon exchanges red accents for blue ones. Nice and easy to spot.

And that’s all the information I have for you, Trainers! Good luck catching your own Shiny Trapinch! I hope you get a good one and have a great Community Day!