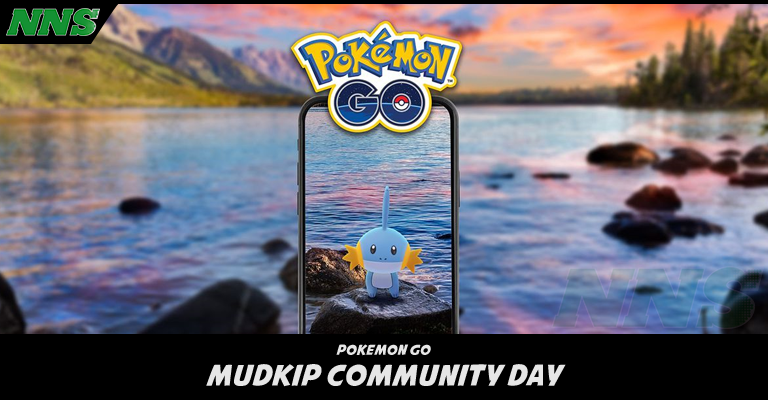 Community Day is upon us once more, Trainers! Following the pattern of alternating Starters with Pokemon from (Generally) the 10K egg group, we have Mudkip this month. The day? Sunday, July 21st. The time? 4:00pm to 7:00pm local time; they’re moving these things later and later, though I believe it’s to prevent people having to wander around outside during the hottest part of the day. Good call, Niantic!

What other delights are in store? Let’s see…

And without further ado, let’s check out this month’s featured, finned friend. 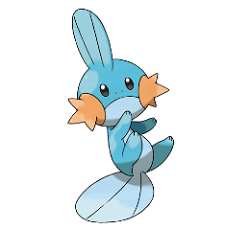 Mudkip is the water type starter Pokemon given to kids in the Hoenn region! You can collect your own after coming across Professor Birch being chased by Level 2 Pokemon literally twenty feet from town. (Such a Man.) It’s a big headed, axolotl type creature, bright blue with orange gills on its cheeks and a cute fin on its head. Water type starters are always nice because it can be hard to get water types early on in the game without Surf or a Fishing Rod, so it’s a pretty great choice. Its various Pokedex entries inform us that this little beast can move boulders as large, or larger, than itself with relative ease and that the fin on top of its head is a radar that seeks out bodies of water and can pick up on changes in water and air currents. It prefers to sleep in mud at the edges of wetlands and swamps. Gross.

Much like Torchic, this Pokemon was a first in that it was the first amphibian Starter Pokemon. Its water type predecessors were both reptiles. We wouldn’t see another amphibian starter until Generation 6 and Froakie, and we have another on the way in terms of Sobble; who’s design is highly reminiscent of Mudkip.

As it evolves into Marshtomp and then Swampert, it takes on the Ground typing as well as Water. This is a mixed blessing as a 4x weakness to Grass type moves is a dangerous position to be in. It gains access to some seriously useful attacks because of this ground typing, though, and that can make all the difference. Hoenn is, after all, not exactly overflowing with Grass types. It’s not a unique type combination, even within the same generation; Whiscash is also Water/Ground, and Quagsire in Generation 2 is a similar, amphibian Pokemon with the same typing.

Let’s see how Swampert does in Pokemon GO. 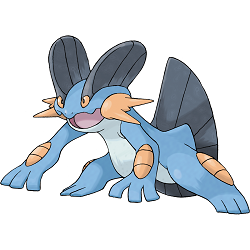 Swampert is a bulky critter in Pokemon GO, with a max CP of 2974 (The highest of any currently available Starter.) Attack of 208, Defense of 175, and a Stamina of 225. As mentioned earlier, Grass type moves are a major weakness…. but that’s the only one it has and considering Grass is an underused type with few stand-out attackers? Not too shabby. Just don’t expect it to be a bruiser with that average Attack Stat.

In terms of moves, Water Gun and Mud Shot are both STAB Fast Moves and the only ones we have access to. Either is good, but Mud Shot has the edge here in both power and Type coverage. In terms of Charged Attacks, Surf and Earthquake are both great STAB options, and Sludge Wave is the other option, though not as effective except as a counter to the Grass Types you do encounter on occasion. Hydro Cannon is the Community Day exclusive move and it is actually going to be the best option; more powerful than Surf!

The other new move of note is Muddy Water. This is being added in on Community Day as an available move, not to be confused with the Community Day exclusive move. The charge bar for this move is broken into three parts so it will be faster to unleash, but not as powerful.

So, that’s Mudkip Community Day in a nutshell. Are you looking forward to snagging a purple amphibian to call your very own? I am. Did you pick Mudkip as your Starter in Hoenn? And who do you hope is the next Pokemon in the Community Day line-up? Sound off in the comments, Trainers! I wish you all the best of luck.