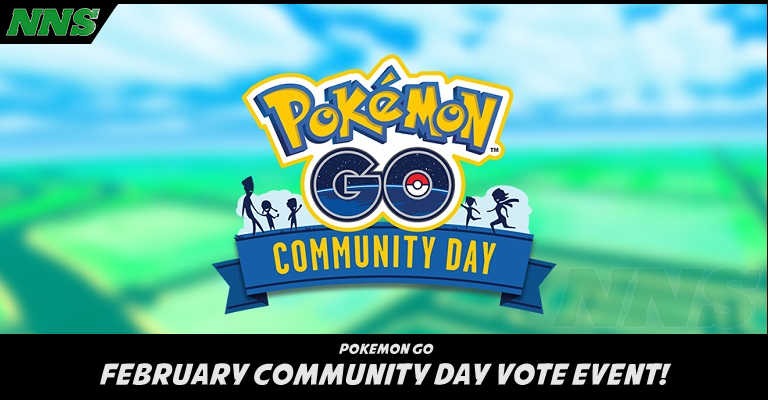 Hey, Trainers! It’s time to Pokemon GO… TO THE POLLS!

…I apologize for nothing.

This time, we’re getting to play a very real role in determining our destinies. At least, as far as Community Day goes for February. We know the date; February 22nd. We know the times; 11:00am to 2:00pm Northern Hemisphere, 3:00pm to 6:00pm in the Southern Hemisphere. We know the bonuses. What don’t we know? The Pokemon.

Niantic is giving us four options, and a very interesting way to pick them. I’m going to give you a breakdown on each one so that you can make an informed choice. But first, those bonuses…

So, now that we know what to expect on the day, let’s get on to the four possible candidates.

The method of voting is related to Field Research Tasks. On Saturday the 1st of February each Pokestop will feature a research task of Catch 20 Pokemon for 200 Stardust. There will be an equal distribution of tasks across Pokestops, so, search out the Stops relating to your preferred Pokemon!

Now, let’s take a little look into each of the potential candidates. 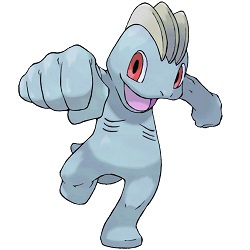 So, to get this out of the way… Machop is already available in Shiny form. It’s a kind of gross green color which makes naming it Hulk way more fitting than it was before with that sort of gray-green coloration. (Or She-Hulk if you, like me, caught a female Shiny.)

The Pokedex tells us that this Pokemon can hurl one hundred (100) human adults. It does not specify if it can throw them all at once in like… a giant ball, or one after the other. I don’t know which option I prefer. Anyway, its muscles never tire from exercise which allows it to weight train with boulders, Graveller, even Sumo Wrestlers. It trains all day, but remains unsatisfied. Some travel the world to master all kinds of Martial Arts.

Machamp is the final form of Machop. It’s a master of many Martial Arts. It can launch simultaneous attacks with all four arms, Karate Chopping with one, uppercutting, jabbing and launching a right hook with the other three. Once it gets a hand on its opponent, the match is as good as won. It can hurl or smack an enemy so hard they’re thrown straight over the horizon.

How does that play out in Pokemon GO? 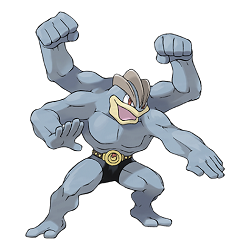 With CP Maxing out at 3056, Attack of 234, Defense of 159 and Stamina of 207, this Goro tribute Pokemon has ruled the roost in regards to Fighting Types until recently. Conkeldurr may well claim that honor before long. Anyway, that Defense is its only problem. Being pure Fighting Type, it’s weak only to Psychics, Flying and Fairy Type Attacks. It has resistances to Bug, Dark and Rock type Attacks, with its only natural advantage in terms of Attacks being against Normal Types.

For Attacks, it has Bullet Punch and Counter, with Counter being STAB. Older Machamp may have the Legacy Attack Karate Chop. For Charge Attacks it has the option for Close Combat and Dynamic Punch, both STAB. Legacy Charge Attacks are Stone Edge and Submission.

The Community Day Attack would be Payback. A Dark Type Attack that would give it some push back against Psychics… but let’s be honest. With that Defense Stat, you’re not using Machamp as a Generalist against Pokemon against whom it’s got a Type disadvantage. You could use this as a secondary Attack if you want to spend the Candy/Stardust to purchase an additional move, though. (To be clear, you’d evolve a Machoke on Community Day to claim Payback and then buy it either Counter or Dynamic Punch.) 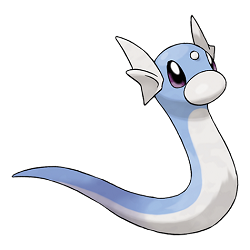 We’ve already had a Dratini Community Day. And its Community Day move, Draco Meteor, was pretty powerful and made this already great Pokemon that much better.

Dratini and its family were the only Dragon Type Pokemon available in Generation 1! It’s said that this Pokemon was thought to be a myth until recently after a fisherman pulled one in after a 10 hour struggle. It molts on an almost daily basis as the life energy within it builds up to uncomfortable levels – this skin is said to be soft and it can be made into luxury clothing items, like shoes. It prefers a peaceful life on the floor of the body of water in which it lives. 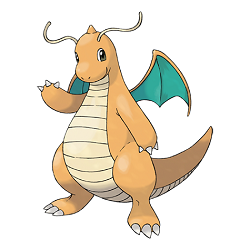 Dragonite, AKA Charizard’s cute cousin, is a Dragon/Flying type. It’s said to be able to circumnavigate the globe in only 16 hours! It flies over the sea, rescuing drowning people and Pokemon, guiding ships to land to prevent wrecks and otherwise being a giant, orange superhero. Somewhere out there in the ocean is said to be an island populated by nothing but Dragonite.

In Pokemon GO, this critter has been a mainstay since day one. Bulky enough to defend Gyms well enough, powerful enough to tear them down. Versatile enough to be a generalist with moves like Steel Wing and Hyper Beam, but best utilized as either a pure Dragon Type (Dragon Breath and Outrage) or a Flying Type Attacker with Hurricane. It has a Max CP of 3792, Attack of 263, Defense of 198 and Stamina of 209. It’s weak against Ice especially, but also Rock, Fairy and Dragon. It’s strong against Grass, Ground, Bug, Fire, Fighting and Water.

The new Community Day move would be Superpower. A Fighting Type move to use against Ice and Rock Types. Again, better gotten as part of a double Charge Attack strategy paired with a STAB Attack to work with this Pokemon’s strengths. 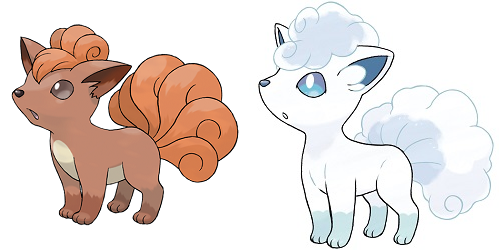 Vulpix was a favorite of mine back in the day. Such an adorable Pokemon! I also really dig the Alolan version.

Vulpix is said to be born with one, white tail which splits into six as it grows. More, in especially old and well cared for examples. This Pokemon is always warm, with an everlasting flame in its body. It’s a pure Fire Type.

Alolan Vulpix is said to be able to breathe air that’s up to -56F! That’s well below freezing! It travels in a skulk (That’s a group of Foxes, in case you didn’t know.) of many individuals who help one another hunt. Before eating they freeze their prey solid. The skulk is usually led by a Ninetales who tends to be protective of the group and will challenge you if you approach.

Ninetales is said to be a particularly vengeful and spiteful Pokemon unable to take a joke – tug on one of its tails, even as a goof, and it will curse you and your descendants for a thousand years. Lighten up, ‘Mon! Anyway, it will know that the curse worked because it’s said this Pokemon can live longer than a thousand years. It’s said that this Pokemon was formed when nine revered saints performed a rite and merged into one being.

The Alolan variant is way more… chill than its Kantonian cousin. In personality as well as temperature! It creates ice crystals in its coat that it uses to flash-freeze prey for later consumption. It was once revered as a deity in the snowy mountains it called home until modern Pokemon Professors discovered its more mundane origins. It will happily escort lost travelers to safety down the sides of the mountains that it calls home, but this isn’t exactly altruistic. It just wants to make sure you leave.

In Pokemon GO, this Pokemon has two sets of Stats, depending on which version you’re dealing with: 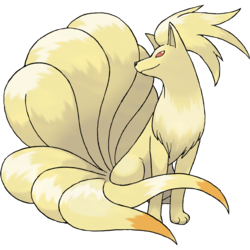 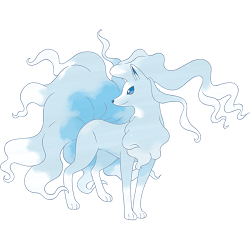 Neither one of these is a Pokemon to set the world on fire. Or ice. The only reason you’re using either one of these is because they’re a favorite. In terms of Stats and Attacks, they’re only okay. Weather Ball isn’t exactly going to remedy this, though the fact that they’re STAB Attacks is nice, and the only Community Day option we see this in. Well, except… 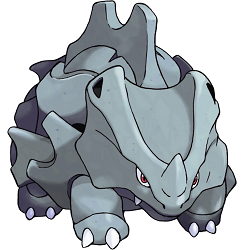 A neat bit of trivia; Rhydon is widely regarded as being the first monster designed by Satoshi Tajiri as a Pokemon. (If we’re talking about the oldest design that became a Pokemon, I think that honor goes to Diglett, which was a character doodled by Shigeki Morimoto in his childhood that was later re-purposed and became a Pokemon at that point.) Check out this sketch! You can see the proto-Rhydon in behind the Trainer character. This is also why the Substitute move uses a simple Rhydon form, and why there are so many Rhydon statues in the first generation of games. 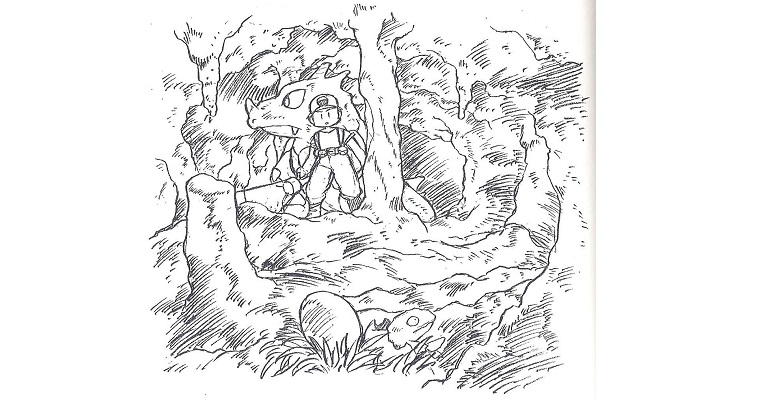 Anyway, the Pokedex tells us that this Pokemon is…. kinda dumb. Like so dumb it forgets why it started charging once it really gets going. It will just keep running onwards into a bright and shiny future where it smashes through everything in its way. Its legs are short and that makes changing direction mid-charge functionally impossible so it just keeps running in a straight line till it falls asleep. Its bones are 1000 times harder than human bone and its rocky hide is so thick it can smash through steel blocks with no immediate pain. It will be feeling it the next day, however. 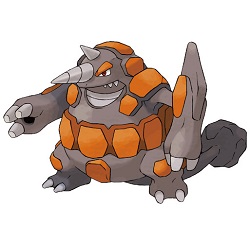 This Pokemon’s design isn’t exactly universally loved. But you can’t argue with these Stats: Max CP of 3733, Attack of 241, Defense of 190 and Stamina of 251. Bulky Attacker, good for defense, great for offense. It’s a Rock/Ground Type so has two super weaknesses in Grass and Water, and it’s also weak to Fighting, Steel, Ground and Ice. It is double resistant to Electric and Poison, with standard resistances to Rock, Normal, Fire and Flying.

In terms of Fast Attacks, we’ve got Smack Down and Mud Slap, both STAB. For Charge Attacks it has Super Power, Skull Bash, Surf, Stone Edge and Earthquake. Latter two are STAB.

The Community Day move is going to be Rock Wrecker and it’s probably going to be the best option for this already super formiddable Pokemon.

Vote for whichever Pokemon makes you happiest, Trainers! I hope, whichever it winds up being, you have the best luck getting a Shiny and some critters with great Stats!

Me? I’m voting Rhyhorn. It’s the best battler of the bunch and will give people the opportunity to fill their teams with super tough monsters. (Hopefully they offer some Sinnoh Stones as Research rewards, too? Please, Niantic? Please?)