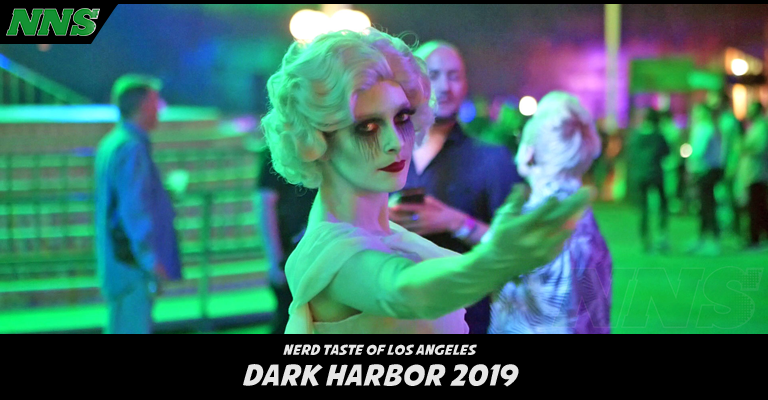 We stopped over to The Queen Mary on Thursday for their first night of Dark Harbor, their horror maze event! Here is our general take away from the experience. 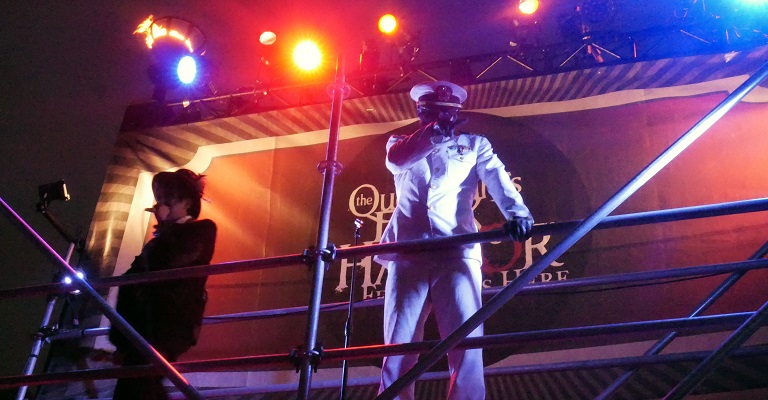 Over the years we have attended the Queen Mary, but there was something special about this year. The lines didn’t feel so long, as tons of people were to busy watching the performances. From the fire spinners, to the sliders there was almost always something to watch on their three different stages. 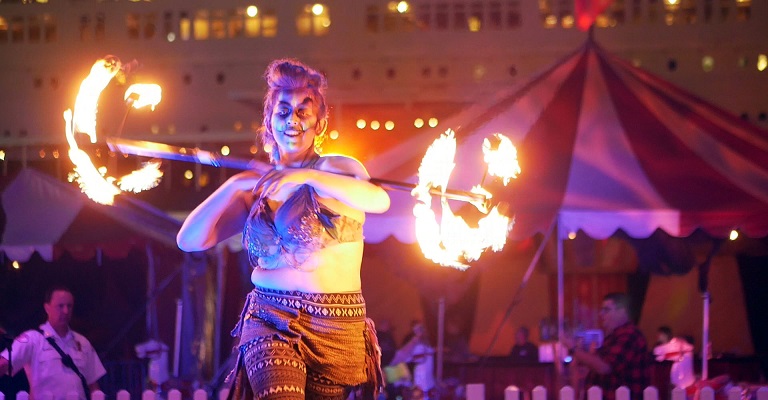 If stage shows aren’t your preference, there are plenty of food and drink to partake in. 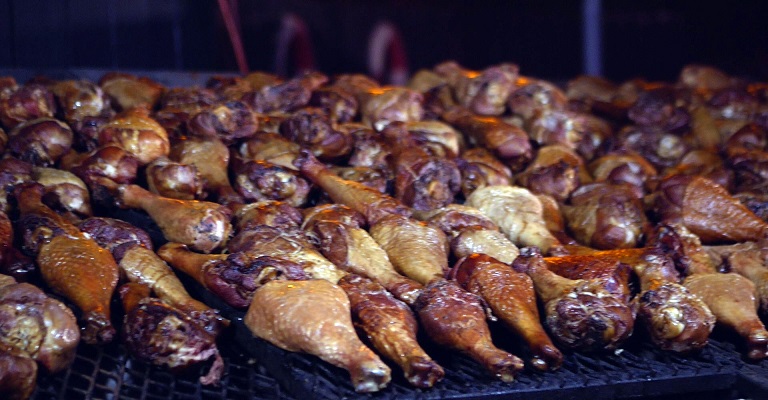 Our favorite food place was the Shark Bites, a long row of grills roast dozens of turkey legs, and a gaggle of burgers. This fills the entire park with the delicious smell of bar-b-que, and makes you hungry. It is important to note two things here, while they serve veggieburgers at this establishment, I saw them get stacked up on the same griddle with the regular burgers, so if you get the bottom burger it will likely have some animal fat on it. So just be careful with your vegan options. 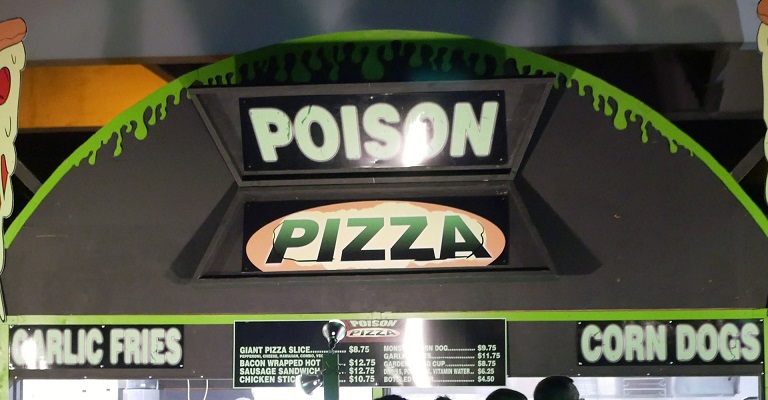 They of course brought back their vendor Poison Pizza, selling delicious slices of pizza! Reminds me of when I was a kid, and I’d ask my father what type of pizza we were getting, and he’d always stupidly reply poison pizza.

As for Bars, there were plenty! 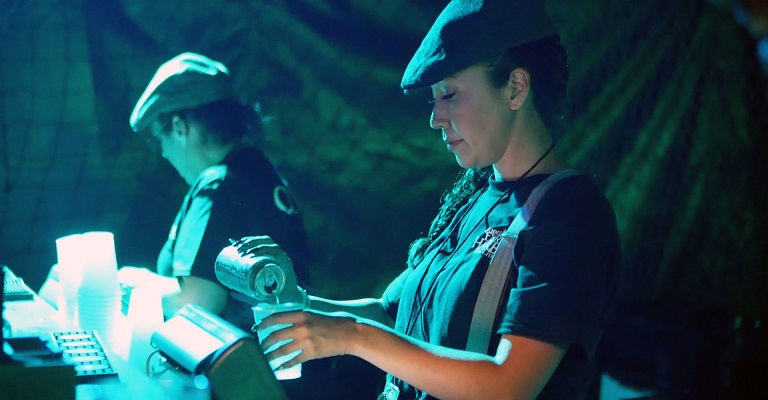 They had their traditional set ups, the Rusty Nail, with a bunch fancy cabanas that people can access. They came with a pretty price though, as reserving one cost $99+, and required a minimum $50 purchase in food or drinks. That being said, they were swanky, gave a pretty good view of the show stages, and you could watch in relaxation as people are getting scared by the signature monsters and their minions. 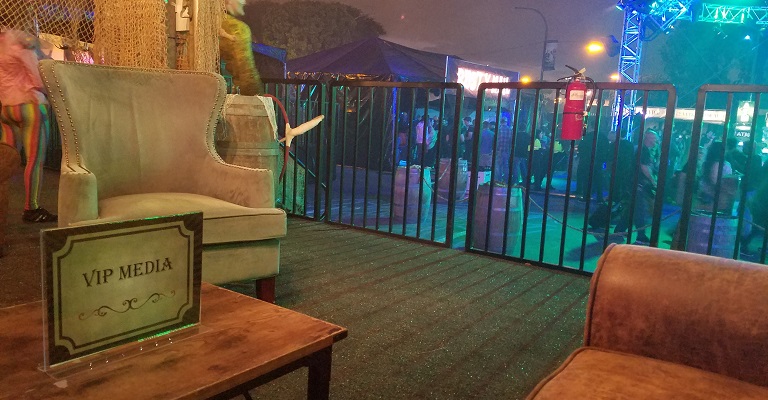 Some of the other bars are the Gallows Bar & Deck, outside the main gate, allowing you to pregame before they let you inside the event, and the Last Drop, a smaller area with an outdoor seating that was pretty swanky.

Our favorite of the non-secret bars thought was the Barrel Room, a whiskey tasting room which sold and sampled whiskeys. For $15 dollars you got three shots of whiskey. 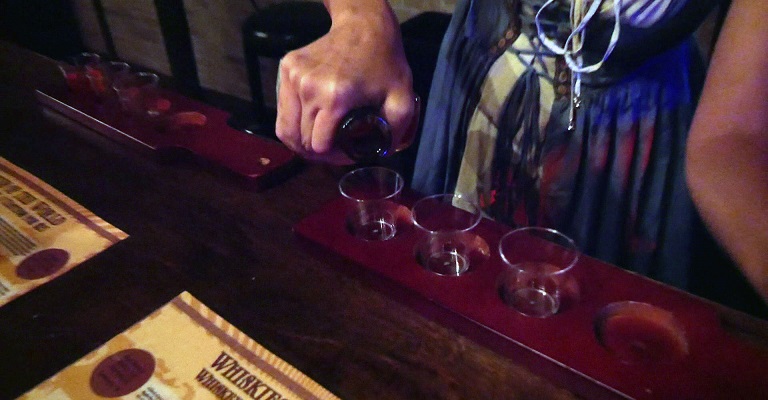 We loved the Ole Smoky Mango Habanero Whiskey, and was probably our favorite for the Barrel Room.

Still want more to drink, well they have secret bars too!

A couple of the mazes have hidden bars within them. Some are easy to find, like Lullaby‘s Overboard and Feast‘s Fathom 6 where the bars are literally part of the maze. They are impossible to miss. Rogue‘s bar is view-able to those brave enough to venture within the maze, but requires clever deduction to still find it’s entrance. While B340‘s The Line Up and Circus‘ The SideBar are very hard to find, but well worth the effort!

Don’t bother trying to find the bar inside Intrepid as it does not have one.

Our personal favorite was the SideBar, as if you are able to find your way in, you can actually use a device to scare the other patrons. Also, if you are a fan of Pickle Backs, then this bar is right up your alley!

To be able to sneak your way into the hidden bars, you needed to first acquire a wooden token from some of the main monsters, like the Ringmaster and the Captain. 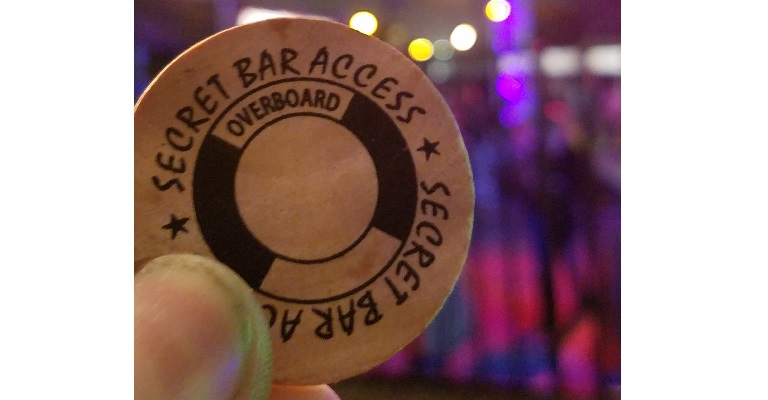 Don’t come right out and ask for them though, allude to them, and play along with the night, as they will likely ask you a riddle. If you solve it, then you might just get your ticket to a secret pub!

Speaking of Mazes, lets break them down for you.

There are a total of 5 mazes. Intrepid, Rogue, Lullaby, B340, Feast, and Circus.

Feast oh boy… Where to start. Feast focuses on the fictional story of a cannibal chef aboard the Queen Mary. When food ran out about the ship, the Chef did his best to meet the needs of his high class patrons. However, when people began to worry about where the passengers were disappearing to, they quickly realized that the Chef had been serving them to the other passengers. Now back from the dead the Chef takes his revenge on it’s patrons by throwing them in his oven, like the passengers did to him as punishment for his crimes.

This maze has some interesting kitchen sets that are really cool, some looking like a human sized oven. The coolest part is that this year, this maze brings people down into the boiler room of the ship, and even empties into their maze themed bar.

How about something a little more private?

If you are looking for a unique experience that only the choice select can enjoy, then I’d recommend upgrading your pass for $40 to gain access to the RIP Lounge their take on VIP. Your $40 upgrade includes two drinks from the lounge, unlimited taco bar, and the ability to spend a little private time with the main monsters from the event, as they frequently check in on the Lounge to make sure their RIP I mean VIP guests are well taken care of.

Our final thoughts of the event?

It was a lot of fun, the Queen Mary does a good job at building amazing mazes, entertainment, and selecting choice food and drinks for their events. I highly recommend that you head over to their site and pick up some tickets now, while they are still available.

Pick up your tickets Here! The event runs from now through to November 2nd, 2019. You can also get discount tickets for the event at Costco, find out the pricing Here!

Feel free to check out our Gallery for the event Here and if you are interested in the Dark Hour, you can read our prior remarks about it Here. Keep an eye on our site in the near future, as we will have a couple videos going live. One specifically telling you where to find the hidden bars within the mazes!