On the corner of Hollywood and Cahuenga in Los Angeles, right in front of the Hollywood Walk of Fame, lies an all inclusive nerd bar called “Scum and Villainy Cantina ” which will transport fans into a fully immersive environment filled with themed food, drinks, events and some questionable characters from throughout the galaxy. J.C. Reifenberg, the owner, let us in before hours to have a special 1-1 video interview which we will share in a separate post coming up. Reifenberg is one of those nerds who you instantly can bond on all kinds of genre’s with the same vibe as you would find from one of your very own long time friends.

Originally, Scum and Villainy Cantina started as a pop up in early 2017, but after having two sold out months as a ticketed limited time event, it’s now fully fledged and here to stay! Inside holds all kinds of nerdy themed events where you can join like minded people such as Buffy Night, Batman Board Game Night, Doctor Who Night, and a Steampunk Christmas coming up to name a few with more new events and themed drinks being added all the time which may change week to week. There are also ongoing nerdy events each day such as the “Geeks Who Drink” pub trivia nights on Wednesdays, Cosmic Karaoke each Thursday, and occasionally they host a unique Podcasts with Kevin Smith called “Fatman Beyond.” This is a safe place to go, to meet people just like you, and to be your true self. Cosplay encouraged!

Leave your blasters at the door, the bar itself is an immersive environment which includes items, food, and drinks from various galaxies including Harry Potter, Doctor Who, Lord of the Rings, and more. There is also a very good chance that you will run into members of the Rebel Legion and the 501st. One of the other unique things about this bar, every board game Monday there is there is a leader board, and anything you purchase at the bar earns points which, with score from game play, translates to various items and benefits from Scum and Villainy Cantina. 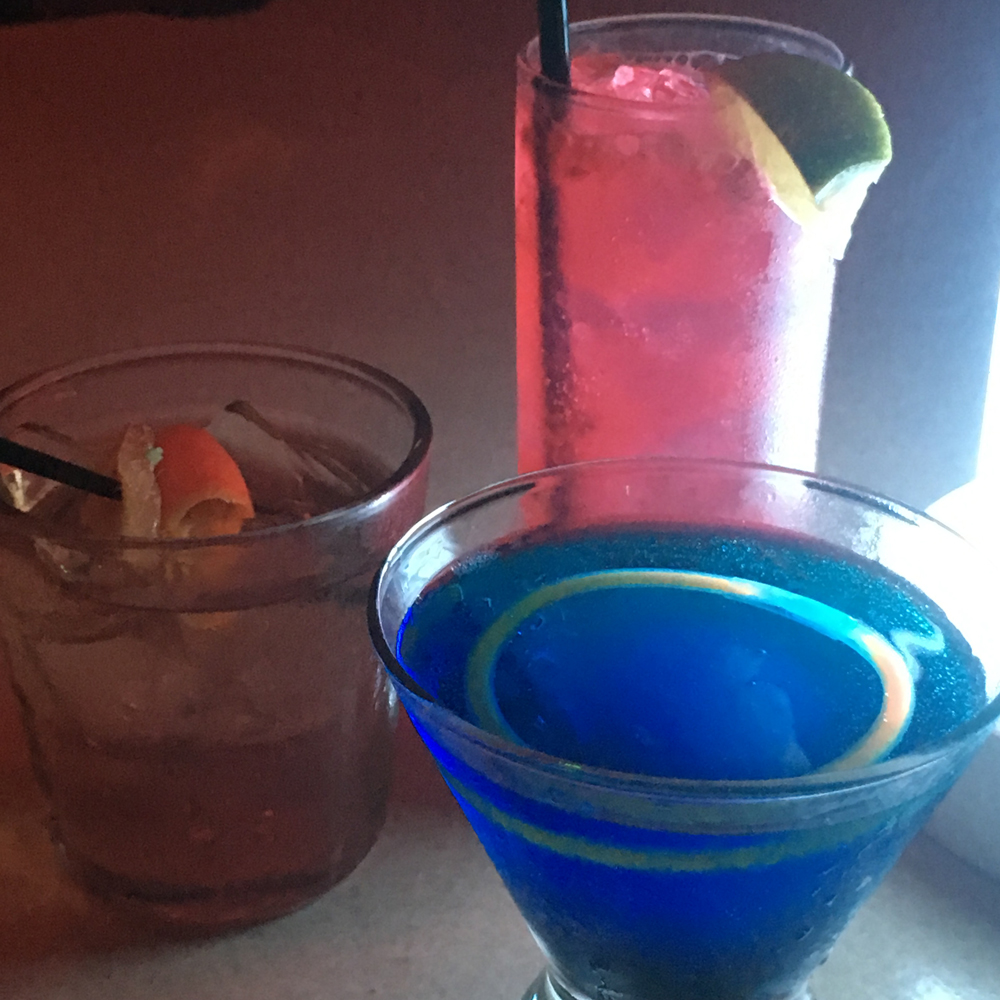 After our interview, we had a personal tour of the Cantina by Reifenberg and he let us know his plans for the future of the bar! Unfortunately, the upcoming stuff is top secret, but SUPER COOL, so be sure to follow their social networks to find out when the latest events and new stuff is coming. We then had the pleasure of having our drinks made by Captain America and Luffy from One Piece which were the Asteroid Field, Scoundrel’s Delight, and The Outlander in which you also get a chance cube to roll and if it lands on blue, you win a free shot! All these drinks were amazing, my favorite being the cotton candy infused Asteroid Field. For food, I highly recommend the Falcon Burger. In addition we feasted on the Gaffi Cheese Sticks, AT-Tots, and for desert the Portal Chocolate Cake but be careful because “THE CAKE IS A LIE!”

So there you have it! Another successful adventure is in the books. Scum and Villainy Cantina social networks are below, if you are in the area, we highly recommend you come in for an event, themed food or beverage, or to get away to meet new friends. See you there!