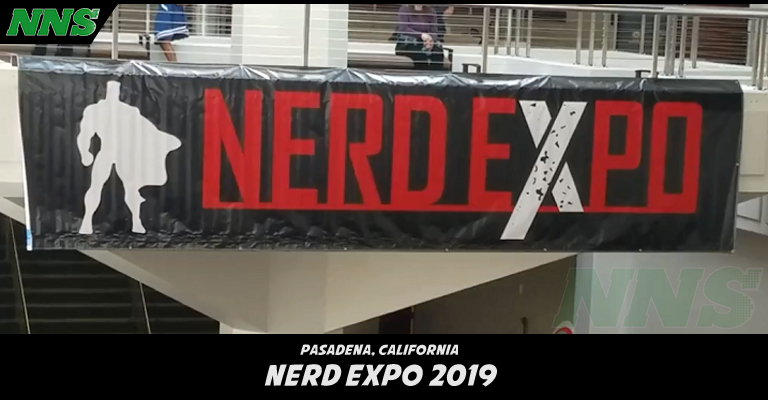 Last Saturday we stopped by Nerd Expo in Pasadena, California.

So for those who weren’t nearby or couldn’t attend, what was it like?

Well theres a lot that can be said about the convention, for one, the convention is not really a full size convention, and in some ways resemble more of a fair. Instead of making use of the Pasadena Convention Center‘s exhibit halls, or ballroom, this event uses the Conference Center, a 28,000-square-foot space. To be honest, the space, and how it was used, felt a bit weird.

After entering the front doors, you are on the upper level. It’s here that they ran a couple panels, and had a professional photo room for stylized pictures. 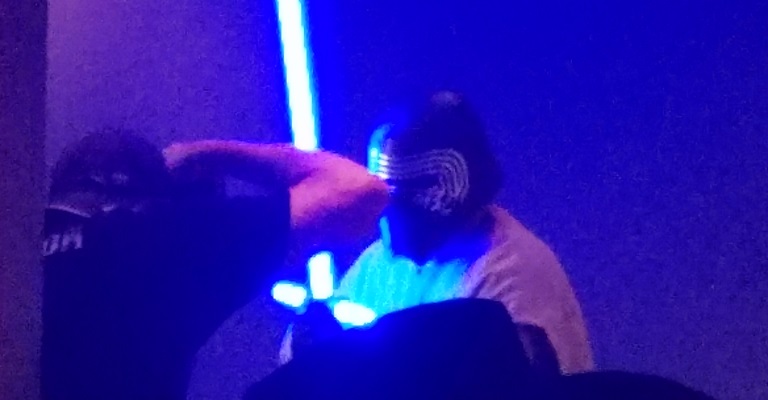 While in the upper area, you can look down on the better part of the convention’s vendor space, which makes up the majority of the event. 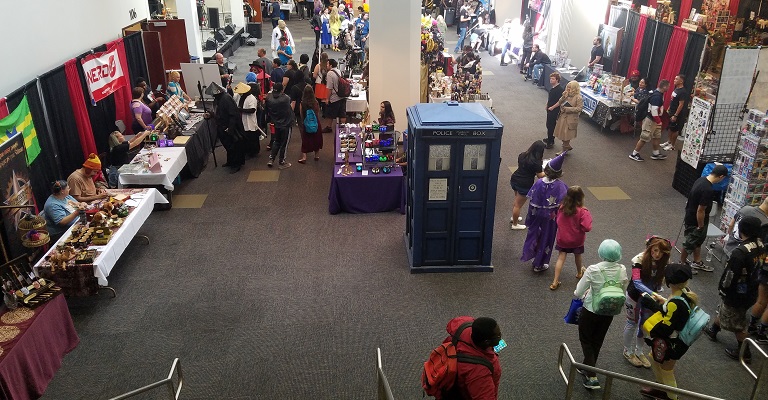 Before heading down though we stopped into the vendor space, we stopped in to the Video Gaming Room, which had it’s own stage, and a lot of machines set up for play. While it was not as large as the space for San Diego Comic Con, to this event’s Credit, it was actually about 1/5 the size, which I found to be quite inpressive. 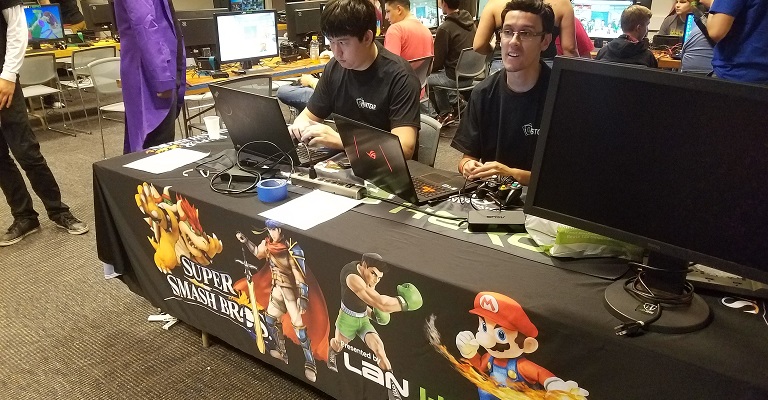 The convention teamed up with Lan Hero to help through their competitions, which included a mario kart competition, and Smash Bros contest. To get people to be aware of them, and increase the knowledge of the tournaments, they had people walking up and down the vendor floor shouting out about the sign up for the events.

Down below, was mostly opened up, allowing more space for the vendors to showcase their goods for the event. However the focal point of the lower level was the grand stage, that when events weren’t running had a DJ spinning/pressing play on a series of music to keep the convention mildly bumping. 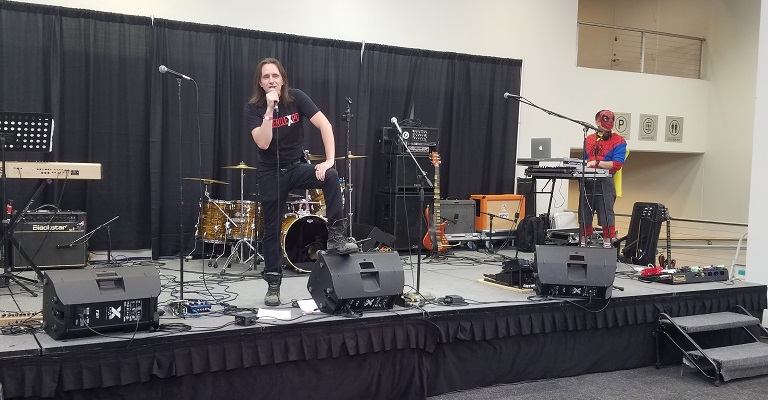 To the left of the stage was the activity room, within the room focuses on Dave and Buster‘s prize wheel. Attendees were welcome to come over and spin the wheel which was free, and could net them coupons, candy, or some of the prizes that the place has normally for tickets. 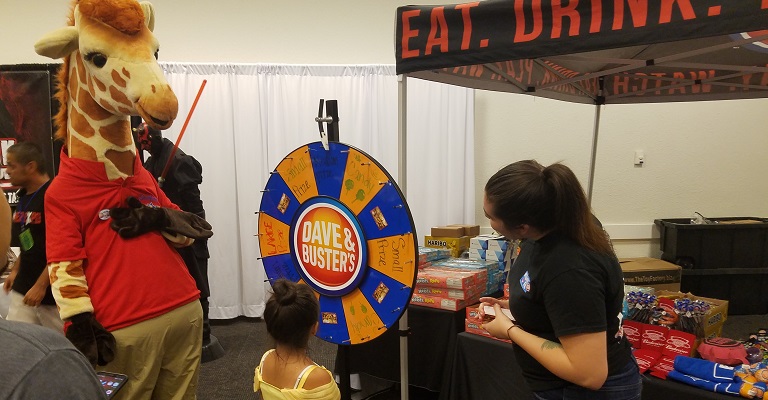 Additionally in this room was the actors who portrayed Darth Maul, Ray Park, and Matty Cardarople, who has the small role of Keith on Stranger Things, but more well known for playing the Henchperson of Indeterminate Gender in Netflix’s A Series of Unfortunate Events.

They also had the Mandalorian Mercs, and Saber Guild, which we will be talking more about in a future post. 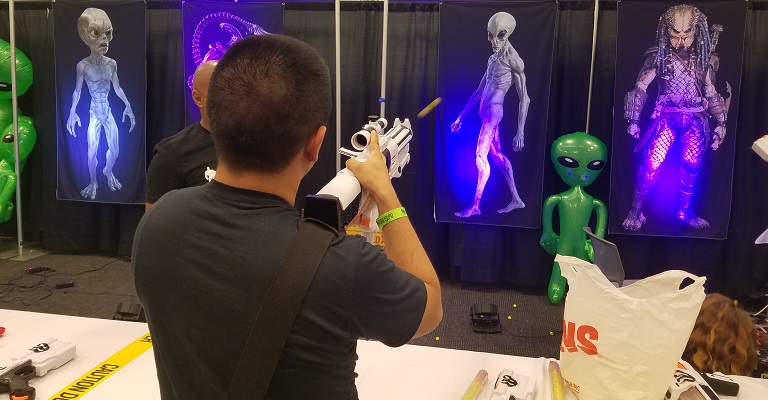 An insane event that they also had, was an Area 51 Shootout, a large wall was dedicated to pictures of aliens, and attendees could fire nerf guns at them. This I think might had missed the point of the Area 51 raid, which was more about seeing aliens then killing them. I hope when aliens arrive they don’t find out about this. We however did record it and will be including it in our video of the convention… so lets hope the aliens don’t have access to Youtube. 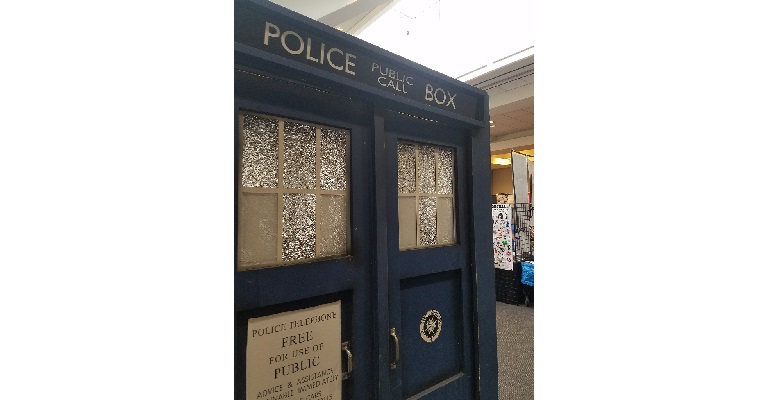 Back to the floor outside, they had photo walls to take pictures of, and a Tardis to photograph in front of.

Our Favorite Vendors Were:
Blackbird Bows: Which had a beautiful assortment of bows!
Dork Ish: A themed soap seller, who showcases some amazing items!
Nerd Up: Which sold some beautiful wood crafted items, including a shot glass holders, and more!
The Philosopher’s Store: Selling wands, and unique wizardingly bobbets!

Another awesome thing about this convention was that 1/6 of the convention floor was filled with voice actor talent!

We did however do one more thing while we were there…. We took pictures of some of the enthusiastic cosplayers! Which to be fair are probably one of the best things about this convention. Check out our gallery of cosplayer’s Here