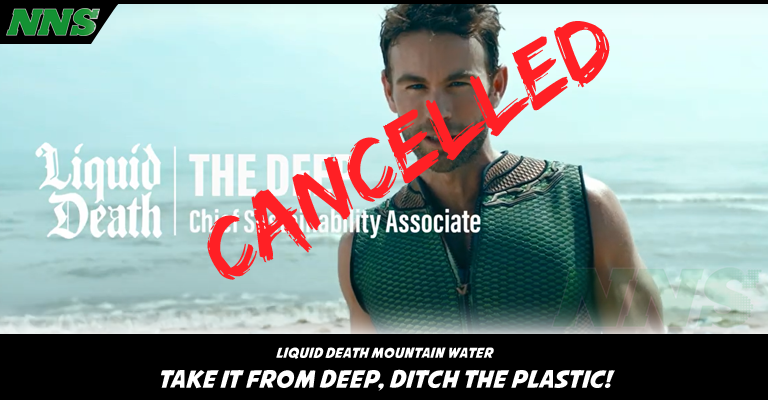 Update
Due to his decisions and… plastic burning… during his incredibly short tenure as Chief Sustainability Associate, Liquid Death has removed The Deep from his position.

Statement From Liquid Death
We regret to announce that, effective immediately, we have parted ways with @VoughtIntl and The Deep as our Chief Sustainability Associate. While we believe in #DeathToPlastic, we find his choice to burn piles of plastic trash on the beach filled with children nearby problematic. Please direct all concerns to @TheBoysTV.

With The Boys returning soon on Amazon Prime Video, it was only perfect that Liquid Death would connect with Vought International for the purposes of getting their message across regarding the importance to protect our oceans from the torrent of plastics that have plagued our world.

With that in mind, who better to champion the cause then former Seven member The Deep.

His work with the organization can be found via Vought News Network’s recent PSA during their “Seven on 7” segment that launches on every seventh of the month.

As we all know, due to his past issues, The Deep was more then willing to join a worthy cause to correct his public image, but his connection to the sea creatures of our globe makes him the perfect person to speak about their concerns that there will be more plastic them sea life in the ocean by 2050.

As part of the #DeathToPlastic initiative, Liquid Death donates 10% of proceeds to charitable causes and nonprofits that are providing safe drinking water to communities around the world where it is not immediately available and cleaning up plastic garbage out of the ocean.

Purchase your own Liquid Death Water in Flat or Sparkling on Amazon, or directly with Liquid Death Mountain Water.