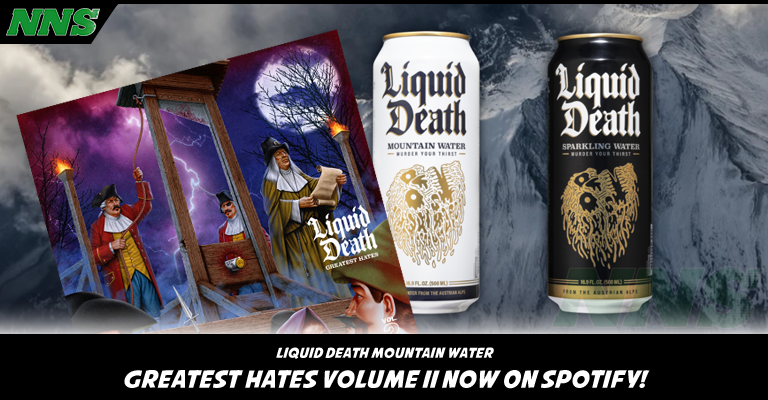 Liquid Death Mountain Water has partnered with artists like Ashrita Kumar (from Pinkshift), Brendan Kelly (from The Lawrence Arms), Chris #2 (from Anti-Flag), Dan Andriano (from Alkaline Trio), Jen Razavi & Josh Lewis (from The Bombpops), Jer Hunter (from We Are the Union, and Skatune Network), Joe Principe & Tim McIlrath (from Rise Against), and Paul Miner (from ex. Death by Stereo).

Together they have made their second album under the title Greatest Hates Volume II! Here are some of the tracks:

We got the chance to talk a little bit co-founder Mike Cessario about the vinyl print, and the company in general.

Eric Bryan Seuthe II: So, you guys first off are awesome. Your ads, your style, and your strategy for getting word out is one of a kind. When you created this company, did you expect that your style was going to bring a lot of hate from your detractors?

Mike: I definitely underestimated the response from internet trolls. It seems like 30% of the internet commenters will hate anything. But 9 times out of 10, if there’s people going out of their way to hate on something via a social media comment, it means there are a thousand others who seriously LOVE it. The worst thing a brand can have is indifference or being ignored where no one says anything bad or good. They just skip your ad/post in less than 1 second.

Eric: How did you come to the idea to take the hate funneled at you, and repurpose it into music?

Mike: We live in a time where everyone is terrified of internet hate. Every little thing we post is judged and criticized. To the point where people are often afraid to post anything. Or they’ll take down something as soon as they get a few negative comments. But the reality is that internet trolls posting hate comments do note speak for or represent the majority of people. We wanted to take the piss out of hate and make it less scary. Be yourself and who cares if there’s people who don’t like it. Nothing interesting or great or innovative will ever appeal to everyone. Not having a single hater should never be the goal of any person or brand.

Eric: How did you convince so many artists to join in the project?

Mike: Because at our core, we are artists ourselves. These folks respect our creative approach and know we have a high bar for how good/funny/creative we want this to be. So they are excited to be a part of it because they know it is not going to feel anything like typical marketing.

Eric: Will Carsola has always been on our radar, with all his creative endeavors. When you look at your art and advertising, it’s hard not to see so much of Will in it. What drove him to your company?

Mike: I reached out to Will early on and we got along really well. I was a big fan of his work and he was a fan of our brand. So he and I have worked together on a lot of creative aspects of the brand.

Eric: From metal baby naming generators, to cursing your water, you keep us on our toes. What do you have planned next on the horizon to piss off the sensitive people of the world?

Mike: We’re planning to take over the world and turn the entire human race into flesh batteries to power our giant marketing robots.

Check out their advert for the new album here: