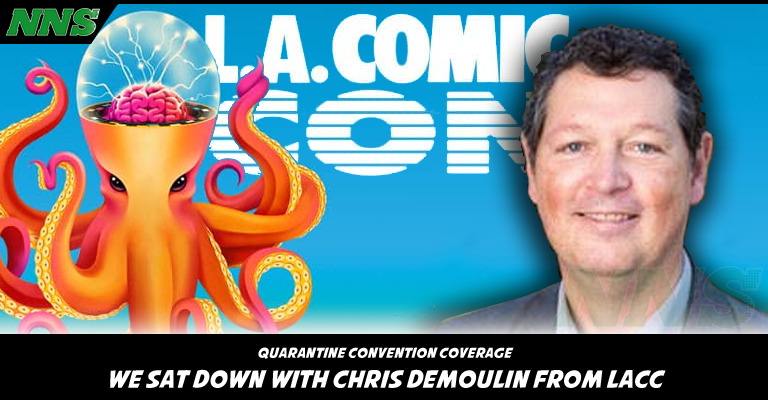 We’ve been covering the events of Los Angeles Comic Con as it lead to potentially happening, and then the ultimate cancelation.

After the news of moving forward, we took issue with the dislike that the convention got from having hope to have a convention. While we never got the chance to make the choice if we personally would attend before the final decision was made, we have to respect the choices they made, and what came of it. To talk about the future of the convention, and conventions in general, we sat down for a chat with Chris DeMoulin, the CEO of Comikaze (parent company of Los Angeles Comic Con).

See what he had to say!

Eric Bryan Seuthe II: Hey Chris, thanks for taking the time to talk to us. I know it’s a sad time as the final decision came down not too long ago about Los Angeles Comic Con this year.

Chris DeMoulin: Thanks. It’s a difficult time for everyone right now.

Eric: A lot of people are frustrated with the loss of conventions this year from the Coronavirus, out of curiosity what was the last convention you were able to attend before the lockdowns?

Chris: I was at NY Comic Con in October 2019, and of course Los Angeles Comic Con last October, as well. Not sure about you, I’ve kind of lost the sense of time the past few months.

Eric: Events like CES and C2E2 were viewed to be spreading events, with most people at CES not even aware that a pandemic was looming. Do you think that this virus will drastically change the way we view public gatherings in the future?

Chris: I’ve been in the large event business for about 12 years, and I think the long-term answer – re: “drastically” – is no. This pandemic has been horrible, but as we learn more, that knowledge is being translated into a variety of short-term and long-term precautions that we can take. Things like taking temperatures and operating at 25% capacity – that’s very short term, a specific response to the CV-19 threat. In the long run, it has increased everyone’s awareness on how infectious diseases spread in crowded spaces.

So, I know for LA Comic Con, the pandemic caused us to re-think what “optimal” density is at a consumer event, and that’s more long-term – how you design exhibit layouts, crowd flow, capacities – things like that. But I think other than for those who have compromised immune systems or other health issues that place them at very high risk – in two years, most average Con and event goers will be back to something you could probably think of as “normal” behavior and large events will again flourish.

Eric: One of the things that caused the final decision about shutting down Los Angeles Comic Con this year was the lack of information regarding the Theme Park rules from Gov. Newsom. Since your decision, the rules for theme parks have become public. Were the rules pretty much what you guys expected to see from the government?

Chris: Honestly, no, the rules were not what we expected. The newly released theme park guidelines are so restrictive that they effectively say – we don’t care if the theme park industry is shut for another year. By extension, it feels like Sacramento is saying the same thing about the convention and event industry. I fully support what Ken Potrock, Disneyland’s president said – that the guidelines are arbitrary and unworkable, and ignore that theme parks have proven that they can open safely with science-based health and safety guidelines. Walt Disney World has been open at limited capacity in Florida since July, with not a single CV-19 case reported linked to that. Companies in the event and theme park industries, and the convention centers themselves, are good at what they do, and can follow strict science-based health and safety guidelines. I trust us more than a random restaurant or retail store, and they’re open. In the meantime, thousands of companies and well over 100,000 employees in those industries are unemployed, and will remain so indefinitely. It is unnecessary, and it is simply not right.

Eric: As we look to the future, experts are suggesting that COVID-19 might move from being a Pandemic to Endemic. Will Los Angeles Comic Con forward the safety precautions from this canceled convention to next year, or are you planning to open as normal, and wait to hear if you have to take safety precautions closer to the event?

Chris: First off, I’d say that we will strictly follow the guidelines we get from the LA Department of Public Health – they’ve been great partners. We expect that many of the changes we developed for December 2020 will be implemented in September 2021 — some for public health reasons, and some just because we think it will make the convention a better experience for guests. I’m not a fan of the expression “new normal,” because none of us know what that will look like or be for another year. But I know we won’t just be doing the “old normal.”

Eric: Unfortunately, when Los Angeles Comic Con announced that it was moving forward with plans for a late in the year convention, a lot of people put a negative spin on the announcement. I can imagine that had to hurt since we felt it was pretty obvious that it was coming from a place of hopefulness. How did the response affect morale around the convention heads?

Chris: We were never saying “we don’t care what’s going on, we want to have a convention!” – we were saying “if the state guidelines come out in time, and it’s at all possible, we think we have some great new safety plans and we MIGHT be able to have a convention!” We knew not everyone would understand right away what we were trying to do, which is why we tried so hard to communicate as much as we could. So yes, totally from a place of hope – and from a place of responding to the hopes of hundreds of exhibitors and thousands of fans, in the surveys we did. There was never one second where we considered doing a 2020 event if it couldn’t be completely safe. We reached out to our most vocal critics, and had a good dialog with many of them. I won’t say they all changed their minds, but I believe most of them thought we were coming at it from a place of integrity and transparency. And then there were a few trolls. They wouldn’t talk to us, didn’t want to hear the facts, they just wanted to see and hear themselves screaming into the net. OK – trolls gonna be trolls. Fortunately most of them had little following or response, and eventually moved on to attack something else.

Eric: I know it takes a small army to run a convention and public event. Some public events, like Texas Ren Faire, proceeded forward and saw a mass exodus of their staff not happy with the event’s precautions. When Los Angeles Comic Con made its decisions and announcements of its safety measures how did the convention staff respond, and did they generally feel like it was adequate for their safety?

Chris: We’re a small team – the core staff is only 9-10 people – and everyone was completely involved in developing the plans for the things that concerned their areas of responsibility. There was a lot of healthy dialog and debate, and the plans improved as a result. So by the end – yes, they were “our” safety plans, and everyone was pretty stoked that it might be possible to have a 2020 event.

Eric: Looking back, hindsight is 20/20, is there anything you would do differently with planning for a late-year convention?

Chris: I probably would have reached out to traditional media first! Honestly, the media coverage of our decisions and actions was so complete, and generally fair, that it was the best way to get the whole story out. I think “teasing” the announcement on our social media probably backfired, because we couldn’t convey all the facts – that the show was still pending approvals, that we were all waiting for the state guidelines, that the exhibitors and talent were excited – if we could be safe – that all tickets were 100% refundable if the date had to move. The media did a great job of covering all that, but it was too much for social media. And that gave the trolls a 2-day head start. But you talked before about scope – given the size of the show, we had to start selling tickets, and at that time there was still a good chance that we could have a show.

Eric: Originally, Los Angeles Comic Con had talked about doing a hybrid virtual and physical convention. Stating that worst-case scenario, if the physical convention was canceled, fans and attendees would still have a virtual event. However, now we have learned that nothing is happening until next year. What was the reason that Los Angeles Comic Con decided to not do a virtual event?

Chris: That’s a great question. When we talked about doing a hybrid live/digital event – which for a lot of reasons, we think is the right future for events like this – it meant that most of the activities would be grounded in live elements at the LA Convention Center, and everything would be available with digital live streaming to enjoy from anywhere, with some digital-only extras. Without the live event to anchor it, there is no real “hybrid” to accomplish. Honestly, I’ve been a little underwhelmed by most of the digital-only nerd Con events so far. So if we were going to do a digital-only event, we want to plan something that is organically and originally digital – not an attempt to “digitize” the content of a normal live Con. We have a couple of fun ideas, and may have something to announce soon. But it won’t be “digital L.A. Comic Con” – it will be its own event.

Eric: Do you think it’s reasonable for all conventions to go virtual, or is a major facet of a convention the physical interaction with people of similar interests?

Chris: Certainly, digital elements can enhance and expand live events, but they will never, ever replace them. We are human beings and social animals. We will always need to gather together in person. This is our tribe, and the tribe needs to come together occasionally to celebrate, to honor our heroes, to explore and to play.

Eric: Thanks again for your time, we can’t wait to walk the halls of Los Angeles Comic Con once more!

Chris: And believe me – our team can’t wait to see you there!