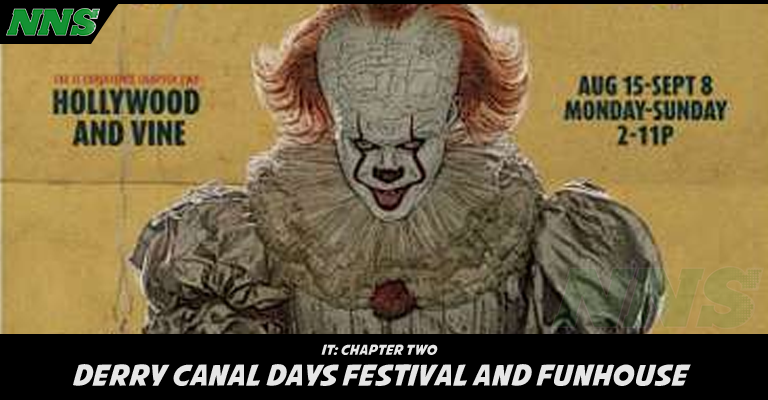 With the release of “IT Chapter Two” coming out September 6th, Warner Bros. and New Line Cinema is bringing back their Hollywood pop-up experience to help bring attention to the movie.

However, instead of a simple house like they did two years ago with their Neibolt House, they are getting into the spirit of the movie, and Pennywise’s origin with the Derry Canal Days Festival and Fun House. They will hold an immersive interactive experience

Their Derry’s Canal Days Festival and Fun House experience re-creates key sets from the new film which takes place 27 years in the future from the prior film. Allowing fans and attendees to enter into the world of “IT Chapter Two”. Also within the activation, you will have the opportunity to play carnival games, and have a photo-op with the Derry Ferris Wheel.

If you enter the funhouse, it has ten interactive sets. Each set will throw you into the world of Derry, giving a combined experience of 40 minutes within the activation. This includes a hall of mirrors, hanging heavy bags, Derry’s sewers and more! Every interactive room has a chance of an interaction with Pennywise in all of his terrifying forms.

The event will run today, Friday August 15, and comtinue through September 8 from 2:00 PM till 11:00 PM. The location of the event is at Hollywood & Vine.

People would pay a substantial amount to experience such an impressive activation, but as a thank you to fans, admission is free.

You can access the event by arriving to the location, and and waiting in the stand-by/walk-up line. However there was a reservation line, accessible here. However if you attempt to do so, they are all taken. However, if you show proof of an IMAX format ticket for IT Chapter Two, then they will let you skip into the reservation line. Well worth it!

This event is 18 and up, but they will allow 17 year old attendees who are with their parents.