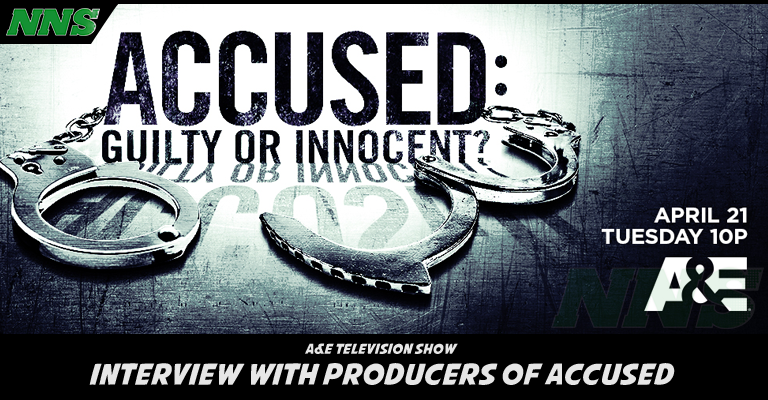 We talk a little more about this show in our series breakdown along with the other show A&E series Kids Behind Bars: Life Or Parole, when we announced the new documentary series coming to A&E. If you want to find out more about this show, make sure to head over Here.

We were lucky enough though to steal some time with the producers, Xander and Malcolm Brinkworth, to ask them more questions about the series in general. Find out what they have to say here!

Eric Bryan Seuthe II: Hey Malcolm and Xander, I first want to thank you for taking the time to talk to us. I personally have had a great interest in the Judiciary branch, and the concept of innocence. What drove you to tell this story to the modern audience?

Malcolm and Xander: The series begins with a simple thought – what does it really feel like to be accused of a crime? It was a question that people have represented or recreated hundreds of times in countless dramas and documentaries. However, we felt like it was a concept that no one had really managed to distil from an experiential perspective. What is the process of a defense like, how does a family bend under an accusation, how does it change an innocent person’s psychology or reframe a guilty individual’s?
Each episode reveals the personal cost of every charge, watching each case unfold from the defendant’s point of view. It shares every twist and turn of this traumatic experience with the accused and those who love them. The stress of living life in the shadow of jail time leaves no family unchanged.
We hope that the series provides a fresh and incisive account of what it is like to be accused of a crime. The questions it raises feel especially important in an era where crime and law enforcement are undergoing some pretty significant changes – both systemically and within our cultural dialogue.

Eric: With a show like this, and the unprecedented access, there must have been an issue with Attorney Client confidentiality, how did you manage this issue, while still creating a show with a more in depth access then shown prior?

Malcolm and Xander: It’s something that we considered very carefully and on which we took extensive advice. We worked hard to ensure that we created an environment of awareness and understanding for all the participants at every stage of the process.

Eric: How did you decide which criminal actions to follow for the purposes of this documentary series?

Malcolm and Xander: There were several key criteria to our decision-making process: that the accused individuals were being charged with a serious offence; that the individuals believed in their innocence; and that we featured a range of circumstances and accusations across the episodes. Common to each case was the element of doubt. We wanted to look at cases where reasonable people could look at the facts from different perspectives.
This process wasn’t easy and took a long period of time. We also had to build up a significant relationship of trust with the defense attorneys and the accused individuals before we proceeded.

Eric: When working on a documentary series, I am sure that the process of impartiality is important, even in spite of an emotional subject like this. How did you and your crew balance those issues?

Malcolm and Xander: For every individual accused of a serious crime, the experience is life-changing. Often everything they have is on the line; jobs, homes, children, marriages. Their freedom is at stake. Each episode sees that experience unfold over the weeks and months leading up to the trial – and continuing through their trial to the verdict. We’re there with defendants, family members, defense lawyers, and then in court with victims, police officers and judges.
Our objective was always to reveal the human experience of what it feels like to be accused of a serious crime and to defend yourself. We hope that each episode does that.
As a result, our teams were there to observe and film what unfolded and to portray that experience as best we could. As documentary filmmakers, it’s really an essential part of the job to remain impartial whilst staying emotionally engaged. It’s something we talk a lot about as a team. However, you can’t spend time with people who are victims of crime or people accused of crime without feeling the emotional weight of that experience.

Eric: My concern with the modern trend of media, is that people are enticed by the sensationalism of a crime, and the idea of innocence is lost in the process when people are telling true crime stories. Have you felt, in showing the trial from the side of the defendant has pushed back against sensationalism of the crime and human detachment?

Malcolm and Xander: We hope that anyone watching any of the episodes will see that these have not been sensationalized. They are documentaries that follow the real and genuine experiences of those involved. We didn’t start filming after the verdict with preconceptions about the material – they were filmed in real time as the story progressed. We never knew who would be found guilty or innocent.
However, a number of the defendants that we followed did experience an assumption of guilt from their communities and from wider society. This often had a significant impact on their lives, their families and the trauma some of them endured whilst waiting for the trial to commence. Many felt that they had been ‘convicted’ before the trial began.
We hope that this series makes a contribution to understanding what is involved if you are the defendant in such cases.

Eric: Most people don’t understand the concept and process of a trial. They are constantly waiting for the Perry Mason, AHA moment in trial. This has been taken to an extreme in Dick Wolf’s Law and Order series. In reality those types of events are few and far between, usually only associated with impeachment witnesses, did anything like that happen during the filming of this documentary series?

Malcolm and Xander: Clichés are often built out of truth – and those Law and Order moments definitely do exist. You’ll see them in the series – moments where suddenly evidence appears at the last minute, where trials are turned by a clever question, or a piece of evidence that feels incontrovertible. We’ve heard juries gasp, seen witnesses crumple under questioning and watched as lies were told.
We hope that the series will inform people of what it means to go to trial.

Eric: Without spoiling the episodes of the season, after joining the defendants on their journeys, to the conclusion in many cases, and finding out the verdicts, do you find that they were fair on average?

Malcolm and Xander: This is a really, really hard question to answer. The series follows 7 cases over 8 episodes – and there is a good chance that viewers will argue over almost every result. In all cases, there are twists, turns and surprises along the way.
There are certainly results that we find harder to understand then others – but, that cuts both ways. Justice is a malleable thing and what violates someone’s conscience in one place may not trouble individuals in another.
The thing that felt most significantly unfair to both victims and defendants was the assumption of guilt. In a situation where someone is painted to be guilty before a trial, things can be left unlooked at or under explored. Victims do not get the justice they deserve if there is an assumption of guilt and the accused do not get a fair trial if juries arrive believing in the statement that if you’re accused, you’re probably guilty.

Eric: People these days have a hard time having faith in the justice system, feeling that minorities, or the poor are disproportionately penalized, and held to a harsher standards. In your journey with this documentary series, did you find that to be the case, or was the process equal across the board?

Malcolm and Xander: That’s a very fair and appropriate question but one which is hard to answer. The range of offences, charges, locations and characters took us across numerous states and communities. Each had different circumstances. Making absolute comparisons becomes impossible for very obvious reasons.
We believe viewers will see a range of experiences across the justice system, from those who have little to those who are spending their life savings to defend themselves. These include single mothers and young men, to those with supportive families.
The criminal justice system is often presented as an absolute choice – innocent or guilty. However, as people, we all understand that in reality many situations are more complex. Our experience, following these cases all the way through to the verdicts, is that seeing justice delivered is not necessarily an absolute or simple process.

Eric: Does this program go into the appeal process, or in further seasons would you be interested in doing check ups on prior cases that went that route?

Malcolm and Xander: We’d definitely be interested in following this in the future. However, this series concentrates on the initial court cases and trials.

Eric: Attorneys can be torn up, and broken by the process of a trial, peoples lives can be destroyed, and victims may never get their justice, after going through this documentary series, how has it effected your outlook, or changed the way you think going forward?

Malcolm and Xander: You can’t be up close to human experiences of this kind without being affected by the emotion and power of it. Every member of the team has been affected by watching these cases unfold. They have had a privileged insight into what accused individuals and their families go through. They have been with attorneys grappling with evidence and dilemmas. They have seen victims who have had to bear the loss of loved ones and are seeking redress.
From an ethical point of view, it’s reminded us all of how complex concepts of fairness and justice really are. We hope viewers will share that journey too.