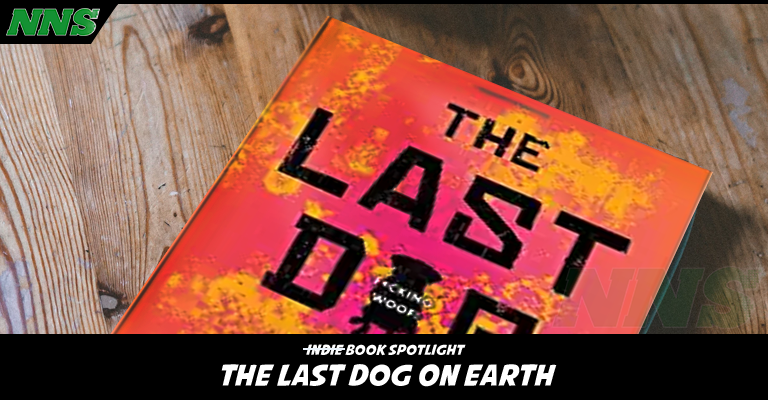 A slight preface to the meat of this review – pay attention to the Author’s name in regard to this book as there is another with the exact same title written by Daniel Ehrenhaft. These are two fairly different books and I’d hate for people to be confused as to which one I’m Spotlighting! We’ll be visiting a semi-post-apocalyptic England in Adrian J. Walker’s book versus the prion-disease altered state of Oregon in Daniel Ehrenhaft’s book. (Though… that one sounds good too. Great. Another addition to my To Be Read pile… Keep ’em comin’, I guess!)

Another note; The Last Dog on Earth that I’m reviewing is fairly mature in nature with language fit to make a sailor blush and some instances of forced sexual interaction. The first I mention just to caution those who don’t care for cussing (I couldn’t care less. Colorful language is just fine by me and Lineker is a wordsmith who can hammer out imagery that’s intensely rich, alternating between poetry and filthy-minded verbiage without skipping a beat.) the second I mention to spare anyone triggered by such things a potentially upsetting surprise – the language isn’t explicit in this case, more implied, but it warrants a mention anyway. If you can deal with these things, let’s continue.

I’m reviewing the Audible version. If you have the service or another way of accessing the book in its audio iteration, please do. The voice cast does an incredible job and it’s well, well worth it. I cannot stress this enough. The voice talent of Jonathan Aris and David John do an awesome job as Lineker and his owner, Reginald. They’re so different in delivery, personality, and language but come together to make a whole that’s so much greater than the sum of its parts.

So, let’s settle in with a nice cup of tea and take a look at what the titular Last Dog on Earth is up to.

Author: Adrian J. Walker
Formats: Kindle, Paperback, and Audible.
Price: $9.99 for Kindle, $15.99 for Paperback, and $18.99 for Audible (or free with Audible Plus).
Length: 450 pages or 13 hours 2 minutes in audio format.
Narrators: Jonathan Aris & David John.
Number of books in the series: It’s a standalone title.

Lineker, named for the famous footballer, is what’s referred to by most as a mongrel. A genetic blending of dogs that you’d be hard-pressed to extricate from one another. A real Heinz 57. Or, as he puts it, he’s an original. They broke the mold once they were done making him.

Lineker is an observer of people, of nature, of the world around him. But mostly of Reginald, his owner. Reginald is one of only a few people left in his neighborhood. He has a telescope to keep track of the others, but he’s fine with not interacting with them. He has his territory and they have theirs. He has his code to live by and it’s served both him and Lineker well so far. Don’t force open locked doors, don’t stray from your area. If you do meet someone else, don’t let them touch you. (He has a laminated card he brings with him to explain this, just to save time.)

A pretty strict set of rules, right? Well, Reginald is a pretty controlled guy. And Lineker loves that about him, as well as everything else. It’s them against the world and they have the kind of bond that only comes from shared hardship.

Because this world is a hard place. The country has been ruined by a global populist fascist movement known as The Purples. Staying clear of them is Reginald’s main goal as he has to walk the broken and bombed city streets scrounging up food for him and Lineker. Still. The peace and quiet can’t be beaten.

For his part, Lineker is fine with spending every waking moment by Reg’s side. No matter how crass this pup can be in language, his heart is absolutely golden. He’s a real ray of sunshine. Unless you’re a squirrel. Then he’s something else entirely.

Their solitary togetherness, though, is shattered as an orphan lands on their doorstep. To make this more complicated, the orphan is mute and Reginald’s lack of ability to communicate with her doesn’t make his new quest any easier. See, he knows that he needs to get her to safety. It takes him a little longer than most to realize that this falls on his shoulders, but he gets there in the end. There’s somewhere she can go… but it’s a long way off. Well outside of his territory and that’s something he’s not prepared to deal with on any level.

So, do this dynamic duo manage to get the girl where she’s going? Can Lineker explain to you in painstaking detail why wolves are toffs and foxes confuse him? (He can. It’s brilliant.) Do we ever find out how the Purples rose to power and why Reginald can’t touch people? Is Lineker the Last Dog on Earth after all?

You need to read it, or listen in, to find out.

So, I took up this story months back, right after bingeing the War With No Name books, but I didn’t want to inundate you with “Apocalypse but also Animals!” books one right after the other. As such, I’ve been sitting here, squirming in my seat with anticipation of introducing you to this book.

I empathize with Reginald as someone who has issues with germaphobia and sudden, uninvited contact myself. Frankly, the laminated card he has is a wonderful idea. Like him, I’m a creature of habit who dislikes interruptions to my routine and life’s little curve-balls in general. There’s a reason he is the way he is and it honestly had me sniffling my way through the chapters where it’s detailed. No spoilers, but Reginald Hardy is a well-detailed, immensely relatable person. He feels real.

Lineker is the dog we’d all love to have. Relentlessly loving, energetic, protective, introspective, and brave, he’s the absolute Best Boy. His bouts of witty mongrel philosophy are introspective, hilarious, and always interesting.

This story doesn’t let up for a moment. Two first-person narratives told from vastly different perspectives, entwined together to tell one cohesive adventure story with high stakes as well as smaller, personal struggles to be overcome. What more could you ask for?

I’ve made a point of letting you know that Lineker swears a lot. I say this with no hint of derision. Anyone who tells you that crude language is the last defense of the ignorant is wrong. Language evolves on the daily, and a big part of any language is the rude parts. If it wasn’t, why would our first instinct be to learn all the swears when meeting someone who speaks a different language, or when picking one up ourselves? The idea that abrasive words are lower class comes from a certain level of elitism that you’ll find anywhere language is discussed. Should you include them in every place you’re writing something? No. In an email sent to your manager or on Grandma’s Christmas card, you might find yourself in hot water. But that’s not everywhere we write… and if you approach a novel the same way you approach an earnings report sent to the senior assistant district inventory management supervisor, it may be a bit of a dry read. Just saying.

In short, I recommend this book heartily. It’s funny, interesting and filled with heart.