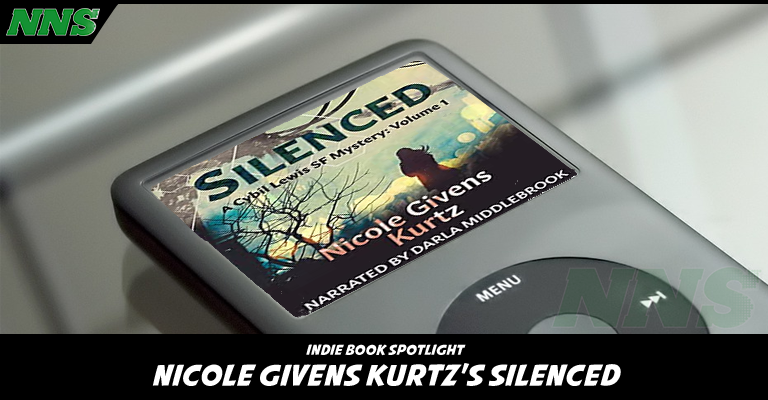 Hey, Readers! Welcome to February. How are we doing with our post-holiday To Be Read lists?

This month, I’m taking a look at the first novel in a series by Nicole Givens Kurtz. This is a mystery story starring a slightly off-beat private investigator by the name of Cybil Lewis. It takes place in the near future, so, some sci-fi elements are present as well.

While I wouldn’t say that I’m a Noir buff, I do love a good mystery story and a quirky, mystery-solving protagonist. (My favorite TV show of all time is, after all, Monk.) So, we have not only some hard-boiled detective action, but a tale set in a well realized, futuristic setting.

How could you ask for more?

So, grab yourself a beverage and your reading-slash-listening device of choice, and let’s see if we can figure out whatever happened to this missing person.

Author: Nicole Givens Kurtz
Formats: Paperback, Kindle, Audible!
Price: $15.00 for paperback, $4.99 for Kindle (or Free with Kindle Unlimited), $17.99 for Audible (or one Credit on Audible Plus).
Length: 217 pages or 9 hours and 50 minutes in audio format.
Narrator: Darla Middlebrook.
Number of books in the series: 3 at the time of writing.

Welcome to 2146! The United States is United no more, being divided up into several territories. We’ve got laser weapons, perfectly cloned humans without a flaw to be seen, prisons that lock you in a personal, dream-filled coma… oh! And flying cars! we’ve got it all.

But some things never change. People still kill other people, people are still corrupt, people are still messy and that’s where our heroine comes in. Cybil Lewis is a private investigator who’s no-nonsense attitude has earned her something of a reputation. When the Mayor comes to her with a missing person’s case, she almost turns it down because she can’t be bothered dealing with two-faced elites. She’s especially reluctant when it turns out the person in question is the cousin to Cybil’s own protege, Jane. Personal connections to cases are always messy. Always difficult.

Despite her better judgment, however, she does wind up taking on the case. (Which is good for us – it would be a pretty short book if she didn’t!) But, as is so often the case, it’s not as simple as it might have seemed at first glance. Lies, politics, corruption, and, of course, murder.

Plus, there’s the situation with one of Cybil’s past collars. He should be rotting away in his own personal, prison dream world at this time, but it seems he’s on the loose? And we also find out that one of Cybil’s ex-lovers may be involved somehow…. he’s one of those genetically engineered, better-than-human test-tube babies to boot.

Want to find out what’s going on? Who wouldn’t! You’re going to have to read it to find out, though!

This was my first book by Nicole Givens Kurtz. Her work came to me highly recommended and I definitely wasn’t disappointed. Cybil is a really interesting protagonist – effortlessly combining a tough-as-nails exterior with an interior that’s just as loving and needy as any of us. She has a past that’s revealed to us over time and it builds a really detailed, interesting person that we come to care about over time. At first, I found her abrasive but as she explains her life and the times she’s living through, you can’t help but enjoy her take on things. I haven’t met anyone in fiction quite like Cybil Lewis P.I.

I’m reviewing the Audible version, narrated by Darla Middlebrook. Her voice is rich and slow-paced. She does a good job at differentiating between characters and everyone’s personality does feel pretty distinct.

All in all, a recommended read from me.