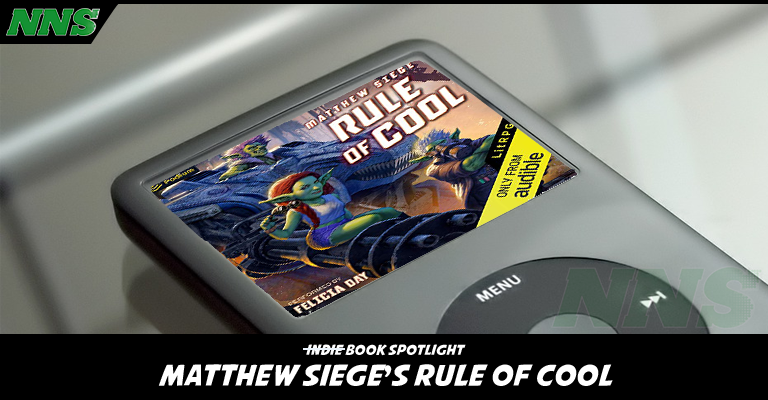 Welcome, Readers! Got another audio offering for you this month.

I’m pretty much a perfect consumer when it comes to the current literary advertising landscape. If it shows up in one of my social media feeds and it sounds even remotely interesting, I’ll snag it. Such was the case with Rule of Cool. What can I say? Targeted advertising works and that’s why it’s a billion-dollar business. Couple that with the fact that audiobooks are the most convenient way to take in my daily recommended dose of vitamin Books and boom.

The main thing that grabbed my attention was the involvement of Felicia Day, whose work I’ve enjoyed in the past. She narrates this audio outing and the main character’s image on the cover is, very clearly, a green, short version of her.

So, slap on your earphones, power up your book delivery system of choice, and settle in for a quirky tale of adventure and memes. (So many memes.)

Author: Matthew Siege
Formats: Kindle, Paperback, and Audiobook.
Price: $4.99 for Kindle (or free via Kindle Unlimited), $14.99 for Paperback, and $34.99 on Audible or one Credit.
Length: 508 pages or 12 hours and 24 minutes in audio format.
Narrator: Felicia Day
Number of books in the series: It’s a solitary outing for now.

Raze is a Gearblin (Goblin/Gremlin Hybrid race.) quest collector at ye olde local tavern-slash-arcade. Her role specifically is to collect the 20 rat tails you were charged with collecting during the Vermin Sermon beginner quest. You know how this works; basic fetch quest mechanics, light combat, and a crappy reward. The perfect kind of quest to get a Hero’s feet wet and grant them some starting EXP and Coin. Raze is literally chained to a desk and forced to deal with sometimes hundreds of Heroes a day, taking their tails (And abuse.) and giving them either a dagger or a short sword as a reward. (It doesn’t matter which one you pick – despite being different weapon classes, they’re identical in worth and you’re just going to sell it on anyway, right?)

In this world, Heroes are at the top of the social hierarchy. After a cataclysm that took place over a thousand years ago (Known as The Smash.) they were catapulted into prominence and everyone who wasn’t a Hero (The NPCs of this world.) was rendered powerless. If you’re not a Hero, you’re not able to fight. You can’t even equip weapons. More than that, you’re rendered powerless by the fact that Heroes can hurt you for any reason whatsoever. Even kill you for being a minor inconvenience. No recourse, no possible revenge.

No wonder the non-hero races are referred to as Dregs.

Raze has a best friend (Who she’d love to be more with. As is stated over and over again.) called Patch who is, literally, of such a sunny disposition that he barely seems like a Dreg at all. One day he comes to Raze, stating that he had a dream. Which is impossible. NPCs cannot dream. It’s an impossibility. Raze doesn’t believe him until he shows her how, she too, can become a Hero.

She undergoes the procedure, entering a well-known cheat code while standing in a particular spot on the map and suddenly, a Hero is born!

And what good is a hero without a quest?

While exploring a mountain that was pivotal to The Smash a thousand years ago, they come across an old Gearblin in a gas mask. He’s out-of-his-mind level drunk after drinking a giant computer’s coolant fluid for RNGesus knows how many decades. He doesn’t even remember his own name! Raze and Patch dub him Bingo and find out that he’s living not only in the innards of a mountain but inside the computerized guts of the central server for a long-gone corporation: Rule of Cool.

Rule of Cool was instrumental in The Smash and disappeared right after. With the anniversary of that world-shattering event on the horizon, it turns out that Raze and her unlikely crew might be just the Dregs to reverse the damage done during the Smash and return the Dregs to some semblance of a dignified life.

But Raze is a terrible cynic, Patch is a naive dreamer and Bingo is a shambling old man who gets drunk on a constant basis and doesn’t understand how to live life in any other manner. Besides, even if Raze and Patch are Heroes, now, they have no idea how to level up, and only the barest idea of how to use their new Hero skills. How can this ridiculous group do anything against the rising tide of Hero animosity levelled at their kind?

You’ll have to read the book to find out!

So, this is relatively crunchy GameLit (Or LitRPG if you prefer.) and in terms of the audiobook, that can be a bit irksome if GameLit isn’t your thing – every time character attacks, defends, uses a skill, equips an item, finds new loot or even has an argument, you get to hear the entire sequence of rolls and/or stats, whether it was a failure or success and whether it applies any stat modifiers to said character or their opponent. I love GameLit and have reviewed some lighter GameLit novels here on Nerd News Social before (Djinn Tamerand Monster Hunt NYC) but in the case of Rule of Cool, I think the Kindle or Physical versions might be more enjoyable for this reason, as much as it’s fun to listen to Felicia Day do all the voices.

The funniest part is, at one point a new buff is acquired by Raze and the flavor text of the buff states that some stat boosts will be applied automatically and therefore not read aloud and that this would make the “Audible version less annoying”. I’m not even kidding. So meta it hurts.

Speaking of meta, this book is. Very. There’s a lot of mention of various brands and current memes. While this made me smile in the moment, it will kind of date the story at a later point down the road. I think it will appeal anyway at that point as nostalgia is always current!

The story itself is enjoyable, with fun characters. I felt genuinely bad for Raze and the rest of the Dregs as they deal with the worst kind of player characters. I was genuinely rooting for them to wipe the slate clean and destroy all the Heroes. At one point Raze commits an act of mass murder that sees a stack of Heroes burn to death and I was pretty amazed that things got this far and there wasn’t any sense of remorse or even catharsis. (And that was nothing compared to some stuff that happens later.)

Raze is a girl who knows what she wants and there’s a good deal of the book where she talks about Patch in a manner that makes her intentions super clear. This isn’t a complaint! Just an observation and a note that, as such, the book might not be for younger readers or listeners. (Y’know. If the above mentioned mass murder wasn’t enough to make that clear!)

All in all, this is a fun ride if you like GameLit, have ever enjoyed an MMO set in a world of Goblins and Dwarves and Elves and Orcs, or if you just love Felicia Day!