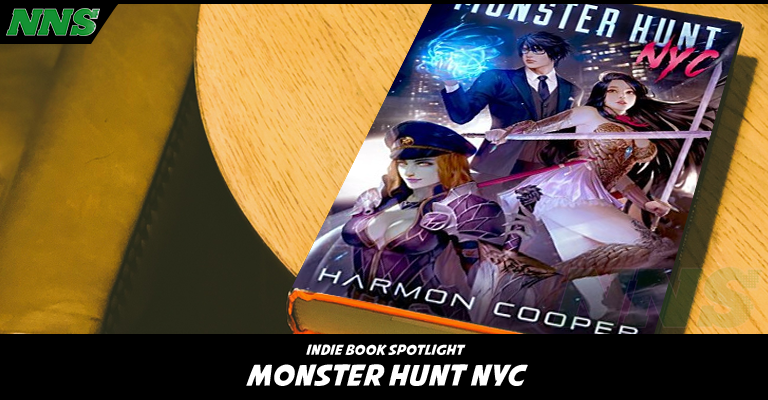 This month’s book takes us to the hustle and bustle of New York City. It’s the 2090s and we’ve got some monsters to catch.

One of my favorite things to do is browse through the hundreds of titles available via Kindle Unlimited. A lot of these are the works of Independent Authors who’s originality and sense of fun are on full display in this space. Authors like Harmon Cooper, who has written over thirty books, can be tried on for size with no additional charge and with every opportunity to support them by buying further releases if you like their work. This is a space where authors who write more niche work can flourish and thrive.

Monster Hunt NYC is one such book. Combining elements of Game-Lit, High Fantasy, a sprinkle of Cyber-Punk and a dash of harem romance, this book has a little something for almost everyone.

Author: Harmon Cooper
Formats: Kindle, Paperback and an Audible version is in the works at the time of writing.
Price: Free via Kindle Unlimited, $4.99 to buy on Kindle and $12.99 for the Paperback
Length: 430 pages
Number of books in the series: At the time of writing, three.

Harmon Cooper, in our correspondence, stated that this story was written with audio in mind and that the Audible version is a full audio drama. (To be clear, audio dramas tend to have things regular audio books usually lack; different voice actors for each character, scores and sound effects.) As someone with an appreciation for audio dramas, I found this bit of information too exciting not to share! Links will be posted at the end of this article so you can hear a sample and be ready to download the full book on July 6th.

Chase Knowles loves his home in Brooklyn. Sure, his apartment is small and his bedroom is bifurcated by a pipe, and, okay, his bed is a mattress on the floor. But other than that? No problem. He’s in a band called Linens with his best friend and crush, Iris, and he has an income that allows for the basics. He has a roomie who he speaks to once a month or so, and that works fine or him. He loves New York and his life there.

Unfortunately enough, however, Thad (Frontman of Linens and a jerk who spends a lot of time dosing up on heavy duty narcotics) has a temper tantrum that results in the band’s equipment being smashed.

And all of this takes place before we even get started on our story proper. We’re dropped, en media res into Chase’s first encounter with the Monster Hunt application, where he appears in a stadium-esque newcomer lobby and is immediately killed by a giant man with a spiked club.

Sorry, Chase Knowles, you have died.

He re-spawns and finds two Huntresses to join him. The Dragon blooded Thulean warrior, Aya Duchig and the studious Metican mage, Lady Cassandra, or Lady C. as she prefers to be known. They are his fighting partners and the ones who will teach him the ins and outs of Monster Hunt.

Monster Hunt is a highly sophisticated AR experience, featuring monsters from real world mythologies as well as fictional realms within a larger, series spanning mythos called the Proxima Galaxy. (This is actually really cool as a concept; the author’s other works are referenced as lore for things like the Thulean race. This point isn’t applied with a heavy hand, and it makes you want to check out his other works.) He navigates the world, the real world, and encounters creatures that he then must use his Huntresses to fight, subdue and then capture. Doing so earns him tokens and Proxima Dollars, which he can exchange for real-world currency.

Currency he needs to replace his beloved bass guitar and amplifier, and Iris’s keyboard and laptop.

The problem? Well, for one, Monster Hunt is illegal. It’s too immersive, too real; you cannot live a normal life out in public with this application running. If you encounter a monster (Or Mythcrea, as they’re called in the application’s terminology) that breathes fire and it attacks you… you feel the fire. You see a simulated version of your smoldering clothes.

For two, the game is complex and he’s extremely new to it. It’s going to take a lot of hard work to learn the ropes and start making real money. He has help in the form of Iris and his two huntresses, handily enough, but even that comes with its own unique set of demands. His Huntresses are very, very real; each has her own ideas and demands that need to be met if they’re going to be an optimal fighting team. And even the Mythcrea themselves all want something within the confines of the game.

Will Chase rise to the occasion and become the Alpha they need? How is he going to navigate the interpersonal politics of three ladies, two virtual and one real? And will he ever be able to replace his and Iris’s equipment?

Obviously very much inspired by Pokemon GOs augmented reality, Monster Hunt NYC takes this idea to its logical extremes. With enough technology, it’s believable that something like this would be going on in the distant future. This world also has androids, eye-implanted internet interfaces and AI that is post singularity; Aya and Lady C. are self aware intelligences contained within an extremely advanced mobile game. So, you get a little bit of a cyberpunk element in there, too. It’s even made mention of that, in this world, marriage between humans and androids is legal, and that people don’t really think twice about relationships with artificial beings.

The concept of using real world mythologies to inform the creatures Chase encounters is an interesting one. I don’t want to give away any of the neat creatures that Chase meets, but they range from adorable to horrifying. These are things of legend and tales that date back thousands of years in some cases. I even found myself googling some of the mythological creatures to see how closely they lined up with their Monster Hunt counterparts, and you can tell that Mr. Cooper has done his homework, at least on the ones I looked into.

There is a harem/romance element to this book and the story is very much told from a perspective that favors the male gaze. A lot of mention is made of how these Huntresses look. It may not be to everyone’s tastes in that regard, but we live in a post Tenchi Muyo! world, and there’s a market for stories about one guy garnering a lot of female attention. The characters are, thankfully, complete in their own right. Each has a distinct personality, a backstory that is hinted at and informs how they act and react, and their own ideas and wants that have little to do with Chase beyond him being able to provide those things by doing well in this game world. There’s tension that mounts… but nothing explicit is shown.

All in all, Monster Hunt NYC is a clever, fast paced adventure that presents a fun and interesting world, filled with cool technology and fun mythology. If Game-Lit is your thing, or you enjoy the Monster Training genre in general, I recommend checking it out.

A word with the Author:
Jim Newman: What made you decide on New York as the setting for this story?

Harmon Cooper: I moved to the east coast and wanted to write more books with New England settings. I wrote Cherry Blossom Girls, which starts out in Connecticut, and at the same time I was playing Persona 5, which takes place in Tokyo. I lived in Tokyo for nearly a year (from about 2014-2016), and I wanted a big city setting that was Tokyo-esque. Hence, New York.

Jim: Lady C and Aya are really interesting characters in their own right; what influenced their distinct personalities in relation to their Alpha?

Harmon : Aya is a more ridiculous, flirtier version of Zaena from Fantasy Online, a LitRPG series I started in 2017. I wanted her to be the tank of the group, but also soft in a way. I’m now up to the third book in the series and believe she still has a hidden side of her that needs to come out. Lady C. is the opposite of Aya aside from her ability to kick major ass. In relationship to Chase, they complete parts of his personality that aren’t as solidified.

Jim: I particularly enjoyed the selection of mythological creatures in your Alpha’s stable. With so many different critters from real world mythology as well as custom created monsters, what was the process of deciding what Mythcrea Chase would get?

Harmon : I wanted to explore some pretty crazy creatures (and still do!), so I research mythological creatures and then try to figure out 1) how one would fight them if they are worth fighting and 2) how they could add dynamics to the story.

Jim: Are there any mythological beasts you’re particularly looking forward to writing about in future installments? (I understand if this question isn’t ideal as it has the potential to lead to spoilers, so disregard if it’s not one you want to answer.)

Harmon : I start each Monster Hunt book fresh, so no, we’ll see what comes up!

Jim: The technology in your world is really interesting. Do you see these concepts eventually being something close to what AR games will become?

Jim: One extremely cool aspect of this story was that it draws from your other created works without making the reader feel lost or without context. If a reader wanted more info, though, which of your books or series would they most benefit from reading?

Jim: You’re an extremely prolific author with over 30 titles to your name! Massive kudos in that regard. What is your writing process like? How much writing on an average day would you say you get done? And do you have any advice for aspiring writers that you wish someone had offered you at the start of your career?

Harmon : My writing process is nonstop. I work on my books all day starting from about 7am to 9pm. I keep track of word count and have an intense calendar that I adhere to. I use yoga, reading comics, exercise and dinners out to keep my sanity. I would tell a new writer to not give up, no matter how much is out there, but be ready for it to take a long time to actually have something hit. Most don’t have the first book of their first series hit. Some do, but don’t look to those guys–it can be way too intimidating.

Harmon : I don’t play right now. I’ve given up gaming for the summer to get books out. Maybe I’ll pick back up in the fall once the new Nintendo Switch drops.