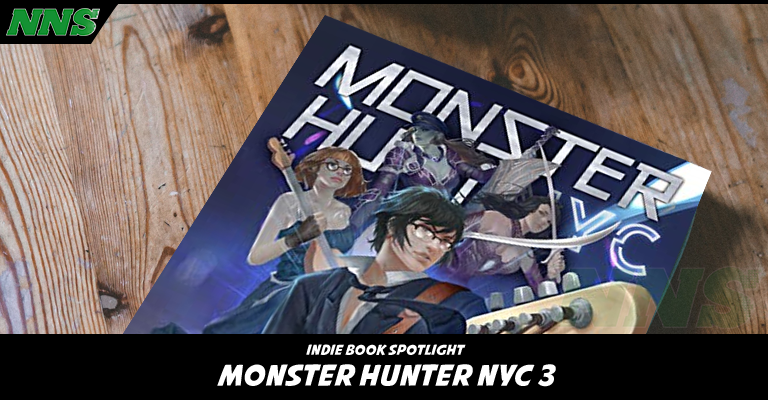 Hello, Readers! Welcome to this month’s Indie Book Spotlight! This month we’re taking a look at the third installment of Chase Knowles’s adventures with the Monster Hunt application.

For those that aren’t up to date, I have reviews of the First and Second entries in this series. If you think you’d be interested in checking out this series, I’d recommend doing that before reading this review with its minor spoilers. It will be here when you get back.

The cool thing about the world of Monster Hunt NYC is that it’s set in a large, expansive, richly detailed world. A place we’d like to hang out. At times like these, that kind of escape hatch is priceless. We’re coming back to old friends, making some new ones, and exploring a little more of the Proxima Galaxy and Everlife with its lore and quirkiness.

So, power on that Kindle and let’s log in. Here be monsters.

Author: Harmon Cooper
Formats: Kindle, Paperback
Price: Free via Kindle Unlimited, $4.99 otherwise. $14.99 for the paperback.
Length: 326 pages
Number of books in the series: At the time of writing, three.

This book follows directly on from the last. The Alpha Duo, Chase and Iris, just came second in a pretty high profile tourney. Not only that, but they come home to an enemy they made in the last book, William, tearing their dojo apart piece by piece.

Still, it’s not all bad. They did also just solve the riddle of Everlife, gaining them a large stipend and some very high profile property. Between these two things, Chase and Iris have more money than they ever could have reasonably imagined. This does cause Chase some severe introspection… after all, this whole crazy adventure only started a few weeks ago when one of their ex-bandmates smashed their equipment and Iris gave Chase the Monster Hunt app code to allow him to play and earn in-game currency. Proxima Dollars can be converted into real-world cash, and he initially only wanted to make enough to replace their busted equipment.

There is one additional complication, though. Lady Cassandra, Chase’s Metican spellsword huntress. They’ve become close over the course of their time together. Very close. In this world, relationships between real and A.I. people aren’t exactly uncommon, though we do see some examples of prejudice still exist. (Can’t escape that kind of thing even in the 2090s, apparently.)

And not only that, but there’s Iris to think about. She’s Chase’s closest friend and confidant and his partner in Monster Hunt greatness. She’s the one who gave him his code, and it wouldn’t exactly be true to say that nothing more than that exists between them.

So, we find Chase at a pretty big crossroads, all things considered. Suddenly rich, in a relationship best described as ‘It’s Complicated’ and with a lot going on. Where will he go from here?

Read it and find out!

Judging by the Author’s Note at the end of the book, this is possibly the last Monster Hunt outing. He asks for reviews and feedback and wants to know if we’re interested in seeing more of this corner of the Proxima Galaxy. He also points out that a lot of the stuff in this book relates back to his other works, which means that the more Harmon Cooper you read, the more you understand in relation to the characters, races and places in this book. Which is fine, and makes some sense considering it might contextualize some of the characters and groups I found difficult to gel with. Now, it’s possible I’m misunderstanding the author’s note in regards to carrying on the series. I hope he does.

If this was the last hurrah for Monster Hunt NYC, my main comment is that I feel like there’s a decent amount of story left to tell. Things to wrap up, interactions that need to be explored more deeply, things that I’d like to see happen. In short, if this is a final entry, it does lack a certain feel of finality or resolution. I know the old saying goes “Leave ’em wanting more.” and I agree with it to a point. I hate seeing my favorite series drag on too long and peter out, but I honestly feel like we just started out with these characters and this premise.

There are a few interesting gear shifts in this entry compared to the prior two; the inclusion of some decidedly pop-culture creatures. Where we were primarily dealing with older real-world lore in the earlier entries, interspersed with creatures and races from the Proxima Galaxy, we see some more modern entries come out in this book. I don’t want to spoil which ones, but you’ll know them when you see them.

We also travel out of the City for a bit with a vacation to the beach. This is a shorter portion of the story, but it’s still interesting to see somewhere else and the way these places are in the wider world.

All in all, I enjoyed Book 3, but I do feel as though there’s a lot left to explore in the world of Monster Hunt NYC.

Jim Newman: First of all, thanks for your time and congratulations on another fun Monster Hunt story! I feel like this one was extremely expansive with a lot more of this world (Worlds.) on display. Did that change your writing process at all in relation to the first and second books?

Harmon Cooper: The third was written a year after the first two, so my writing definitely improved (as it always does with each new release). I also wanted to branch out the digital world more. It was quite a fun exercise in world-building, even though it only used a few locations.

Jim: There was a different roster of creatures this time, including some decidedly more pop-culture entries. What prompted the shift toward newer mythologies?

Harmon: The mythcrea in this one were used to mainly switch things up, and to pay homage to my other works (like Hiccup and fighting one of the Cherry Blossom Girls). Myths and mythological creatures are a big part of what I write, and I’m currently working on a series to be released in July 2020 that deals entirely with Japanese mythological creatures. It is now a pastime for me to try to find new creatures and new (well, old) stories for me to get inspiration from.

Jim: Hiccup was an interesting addition to the line-up and I understand he’s featured in another of your series. What were your influences in creating this guy? He’s hilarious!

Harmon: Hiccup is from my series Fantasy Online, which has some relations to Monster Hunt NYC and also takes place in the Proxima Galaxy. He’s a reader favorite and fun to write. He’s also maddening.

Jim: It was interesting seeing an area of the real world we haven’t been in the Monster Hunt books before – if the series continues, could Monster Hunt NYC shift gears more prominently to non NYC locations?

Harmon: I would love for it to shift more to New England, where I live. It’s nice traveling for research here and I can imagine mythcrea living in all sorts of places. Other locations could be places like Brattleboro, VT or Portland, Maine or Provincetown, Mass, etc.

Jim: Music plays such a massive role in these stories, which makes perfect sense considering they also work really well as audio dramas. Do you find music helps you write? Or do you tend to prefer silence when you’re working?

Harmon: I was a musician for a decade or so before I became a writer. Music absolutely helps me write. I can’t write certain works without the playlists I’ve curated for that particular piece.

Jim: Do you have any upcoming projects you’d like to let our readers know about?

Harmon: I’ve started publishing under the pen name “Gideon Caldwell”. The first book in his new series is called Dungeon Goddess, and it takes place in New York City again, which readers of Monster Hunt NYC may enjoy if they liked that aspect. As Harmon, I have two new series that I’m launching this year. One is a progression fantasy book called Pilgrim (think Witcher meets John Wick meets Inuyasha), which will be out in July with the follow-up out in December. The second is a slice-of-life LitRPG to be released in October, and set in the proxima galaxy. I haven’t publicly revealed the title for this one yet, but it will be my longest book yet.