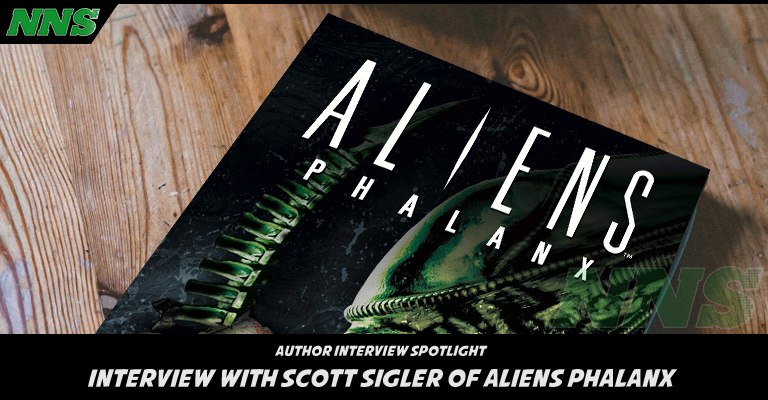 Earlier in the year I got a chance to review the book Aliens: Phalanx, which you can view my spotlight on it Here, but as a direct result of the Pandemic it was hard to set up the interview to talk about the work with the author, but thankfully we were still able to get things together to share our questions with you guys.

That being said, check out…

Jim Newman: Thanks so much for taking the time to answer a few questions! For people who are discovering your work for the first time as they crack open Phalanx, what other work of yours would you recommend they check out if they like this book?

Scott Sigler: If they like PHALANX, I would suggest they get my novel EARTHCORE and ANCESTOR. Those two books, in particular, are influenced by James Cameron’s ALIENS. And, the sequel to EARTHCORE, MOUNT Fitz Roy, should be out near the end of 2020, so the story continues.

Jim: Alien is a long-lived property and as such has a lot of established canon; what was your process working within this universe?

Scott: I worked closely with Steve Saffel at Titan Books, who was an intermediary with the continuity editors at Fox. The entire process went very smoothly.

Jim: What prompted you to come up with this setting? It’s so different to what we’ve seen before which leads to a really fresh take on this franchise.

Scott: Because of the isolated setting for PHALANX, there weren’t many problem areas when it came to blending in with the ever-changing history and continuity of the ALIEN expanded universe. That, in part, was why I picked the setting I did, so that my story wouldn’t clash with the timeline variations seen from ALIEN and ALIENS to PROMETHEUS and COVENANT. So honoring the entire body of ALIEN-related work was one reason for picking that setting.
Another reason was to avoid some plot lines that have become tropes in the ALIEN universe, namely, Colonial Marines, Weyland-Yutani being the persistent and recurring “bad guy,” and the always fun “get to the shuttle before this whole things blows!” angle. I tried to bring something fresh to the universe.

Jim: Atagina is a really wild seeming planet and the animals there are pretty interesting. How much work went into creating this setting and ecosystem?

Scott: Quite a bit of work went into creating it. I’m a science buff particularly biology, and all of my work incorporates detailed animal life. While PHALANX is not a textbook by any means, I wanted to make sure the basic science was sound, so I draw from multiple real-world examples, both current animals and extinct ones as well.

Jim: Ahiliyah is a really great character. What were your key influences in designing her?

Scott: The ALIEN universe has a strong tradition of female lead characters. I wanted to honor that, but at the same time I wanted to break some new ground. Ahiliyah starts out with little power to make change. As her skillset grows, and as she learns about the systemic issues of her culture, she realizes that she can’t wait for someone else to make things better — she has to be the agent of change. It is a hard lesson for her to learn, and it costs her greatly.

Jim: Her group dynamic with Creen and Brandun is a really important element in this story; did you create them based on what would work well in that group setting? Or did you come up with each of them individually and let them find their own dynamic as the story unfolded?

Scott: I always have a general idea of the relationships involved in one of my books. As one writes, however, the characters come to life and start doing things you hadn’t planned on them doing. This is always a wonderful and frustrating phase of creating a story. Wonderful, because when internal logical consistency dictates that a character do something not in the outline (or “refuse” to do something that was in the outline), you know they are becoming more “real.” Frustrating, because when the outline breaks, you have to do it again. And again. And again, until characters and storyline both line up and the reader doesn’t have to think things like “where the hell did that decision come from? Ahiliyah wouldn’t do that!”

Jim: Who was your favorite character to write for?

Scott: I genuinely loved all three main characters. Ahiliyah is the driving force. She’s brave, selfless and smart as a whip. Brandun could have let his size and strength go to his head — not to mention that he’s a fair-haired child of a misogynistic culture and he’d be rewarded for being a bully — but he does not. He is true to himself, his family, and his friends. I like him because he has the power to do what ever he likes, yet he concedes that power to someone he thinks is a better leader than he is: Ahiliyah. And Creen? He was so much fun to write. Creen is that mega-genius that comes along once every ten generations, yet he’s so frustrated with his lack of support and his diminutive size that his attitude gets in his own way. He literally changes the world, insulting everyone around him as he does.

Jim: What advice would you love to give any aspiring authors? Something you wish you knew before becoming published?

Scott: Authors need to understand that this is a marathon, not a sprint. Your first couple of books will likely suck. You won’t know it, you’ll think they’re great, but you don’t have the intuitive skillset or the experience to see all the facets you need to see to make something good. That knowledge comes with experience, and experience comes with one thing only — writing, writing, and writing some more.
My best piece of advice is always the same: for newbies write a bad novel. Knowing your first book will suck frees you from the pressure of worrying about every little thing. This is important because if you know it’s going to be bad, you push through areas where you are stuck, and you learn how to finish a novel. Learning how to finish is a superpower that many people don’t achieve. Once done with the bad book (which you will think is quite good, trust me), put it away for six months. Don’t look at it before then, not even a word, don’t let anyone else look at it, do not submit it to agents or publishers. When the six months is up, open the book and read.
Six months is generally long enough for a writer to forget what they thought they were saying, and see what is actually on the page — just like their readers will. Warning: this is a hard process. It’s difficult when you see how bad you suck. But this is the big step forward! Pay attention to the areas where you suck the most, and learn how to fix them.
When you write your second book, that’s actually your first “real” attempt. You will come in knowing you can finish, which lets you push through the areas where you get stuck, areas that make most writers quit.

Jim: Do you have any upcoming projects that you’d like to let our readers know about?