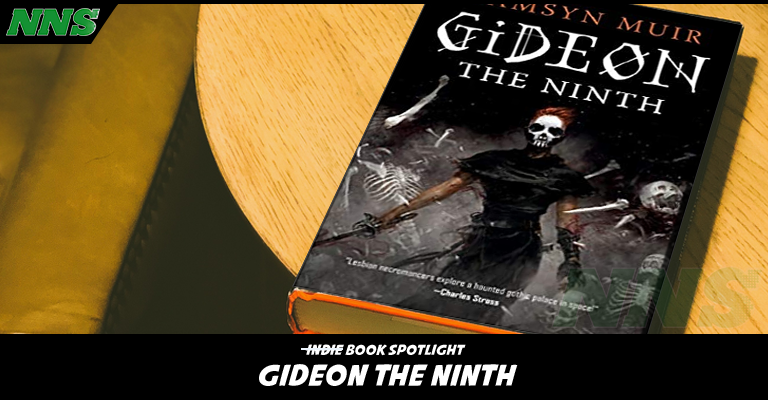 This month’s Spotlight focuses on a book with a ridiculously interesting premise; a haunted house murder mystery set in a galaxy spanning empire, with all the tech that entails, based around necromancy. As in the primary societal constructs of this empire are intrinsically tied to using magic to bring the dead back to life in varying ways.

Now if that isn’t a setting you can sink your teeth into, I don’t know what is. Especially in the creepiest, spookiest month of all!

Again, not an Indie title. This one was suggested to me by a friend who thought I’d enjoy it and, what do you know, they were right! (Having said that, I welcome any and all recommendations. Feel free to drop them in the comments section or email them to me.) This book was published in September of 2019 by Tor.com and the version I’m reviewing is the audio book version available through Audible. The author is from my own country of origin, New Zealand, as well! Anyway, I promise that next month will be an independent author’s work that I read with my eyeballs.

So! Let’s open a couple of dusty, ancient crypts together! Power on your reading device of choice (Or crack open a paper copy if you have one.) and let’s get spooky in space.

Gideon Nav is fed up with her lot in the Ninth House. We meet her in the midst of a particularly competent escape plan. She’s shed her electronic shackle, gathered up her few worldly possessions (notably her two-handed sword and a stack of pornographic magazines) and left her home, such as it is, to board a shuttle she’d managed to order well in advance. The plan is to leave the ancient, barren world of the Ninth House for a career in the Cohort – the military force run by the Empire to fight a foe who’s name we don’t find out in this book.

Unfortunately, her plan is foiled by our other main character; Harrowhark Nonagesimus, the Reverend Daughter of the Ninth and shadow ruler of this planet. (Her parents, who would be the actual rulers if they weren’t dead, are being controlled via necromancy by Harrowhark who uses them as an actual puppet government.) She’d caught on to this latest escape attempt a while back but waited till the very last minute to foil it, all the better to crush Gideon’s spirit.

Gideon and Harrow couldn’t be more different in regards to social standing. As mentioned earlier, Harrowhark is the de facto head of state. Gideon is a foundling. Her mother was found in a mine shaft, clutching Gideon in a climate controlled pod just before her own death. No record of this woman and child could be found, so, Gideon was entered into indentured servitude. The only two children seemingly on an entire planet otherwise filled with nuns, the elderly and the dead, they were forced into close proximity by sheer virtue of their similar age. Harrowhark, ever eager to exert her influence, made Gideon’s life hell.

In short, they absolutely loathe one another.

One of Gideon’s few pleasures in life is training to fight. Lots of push ups and sit ups as well as training with her massive blade. This was, in her estimation, her best chance of getting off-world. And, as it turns out, she was right. Just not in the way she wanted. Instead of joining the Cohort, she’s being forced on an entirely different adventure. The Emperor has called for heirs from all nine houses to come forth to the planet of the First House. It’s time to chose a new Lychtor, which is sort of like a mega necromancer used in the ongoing war effort. Harrowhark is the Ninth’s appointed delegate but per the rules, she must bring a cavalier. Cavaliers are classically trained in the rapier and serve as one part manservant, one part bodyguard. Gideon Nav has no interest in the rapier, considering it a silly weapon compared to her own huge sword and has no interest in looking after Harrowhark but she’s offered a deal too sweet to refuse – her absolute pardon and freedom from the Ninth House after all this is done with. Her dreams of joining the Cohort might finally be realized.

The task is simple; move into Canaan House (A huge, ancient mansion) on the planet of the First House and use your wits, skill and necromancy to uncover its long-held secrets. This is the way to become a Lychtor.

The planet of the First is a huge departure from that of the Ninth. Instead of being a lifeless moon, it’s a bright and vibrant world with actual sunshine and rain and a salty sea. And that’s not the only thing our heroine must get used to; people actually treat her nicely, here. Some of them do, anyway. Kind people seem not to exist on the Ninth so it’s a novel and welcome thing to be treated with respect. There’s Magnus, an older gentleman with a penchant for Dad Jokes. There’s Dulcinea Septimus, heir to the Seventh who has terminal blood cancer and seems about ready to die at any moment. These two are people Gideon forms bonds with. She develops an honestly touching and tragic bond with Dulcinea especially.

And then the murders start.

Gathering a bunch of necromancers and armed bodyguards in a mansion together results in dead people? Never would have guessed!

Now, Gideon and Harrowhark must work together not only to realize Harrow’s dream of becoming a Lychtor and Gideon’s dreams of freedom, but avoid being killed off as well. Can these two natural born enemies pull together to overcome these crazy circumstances? All they have here is one another, after all.

This was an awesome story. Absolutely hilarious throughout while maintaining a considerable air of creepiness, there’s a great balancing act being done here. Gideon is a smack talking, insult flinging sass-machine with an unexpected softer side that’s allowed to shine once she has a reason to allow for it. The language is primarily modern which makes sense considering that despite the swords and sorcery aspect to all this, it’s obviously set in a future so far flung that humanity is living across an entire solar system that’s definitely not this one and have been for thousands upon thousands of years. This use of language lends a feeling of familiarity which is hugely important considering the strangeness of the setting and the way this universe works. It allows for us to connect with Gideon on a pretty fundamental level, and she’s definitely a character worth connecting with because she’s a hilarious bad ass. This book had me chuckling out-loud a fair amount and that’s primarily due to the whip-smart dialogue.

There’s a lot of action in this book. Combat between cavaliers and between various characters and huge, undead monstrosities and it’s all really solidly written. It’s never confusing or rushed and each battle Gideon deals with teaches her something she gets to use later. These battles also inform the relationship between Gideon and Harrow as they’re forced into a begrudging respect for one another through white-knuckle adversity. This change in relationship is well paced, never feeling forced. They can’t stand one another and everything each of them does pisses the other one off but this, if anything, makes their eventual solidarity that much richer.

The setting is interesting. A lot of the best settings are fantastic collisions of two separate and seemingly incompatible ideas that are made to love one another and this one definitely fills that mold. Shuttles and computers and lewd books in service of sword wielding knights and bone bending sorcerers. I honestly don’t know if I’d class this as SciFi or Fantasy. I think it will appeal more to fans of the latter, though. That’s if I had to chose. There’s a little techno-babble but a lot of it relates to the energy surrounding death and the dying so even that has a softness to it.

There are a LOT of characters in this story. This is helped by the handy who’s-who at the start of the book. It’s an awful lot to keep track of and I’ll admit that when we get to Canaan House and start meeting them all it can be a bit hard to keep them all straight. Once you get to know them though, this does become less of an issue. They are, for the most part, memorable and fleshed out well and plenty of attention is brought onto the ones you need to keep your eye on.

As I mentioned, the version I’m reviewing is the audio book. The narrator, Moira Quirk does an excellent job and packs everyone with masses of character and a range of accents.

All in all, this book is a fantastic time and if you’re looking for a thematically appropriate October read, give Gideon the Ninth a try!