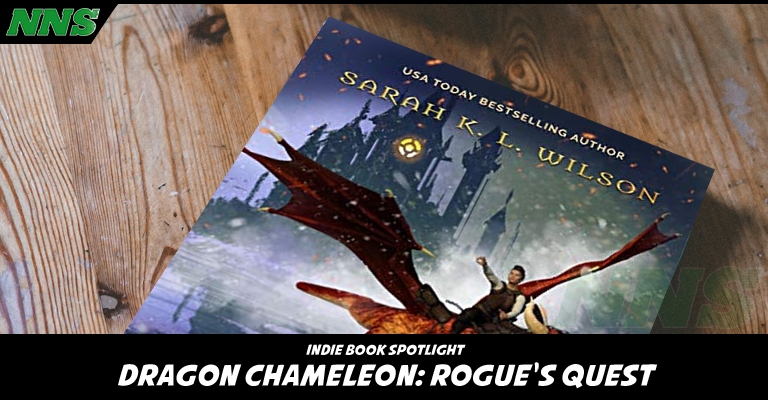 Sarah K. L. Wilson, a U.S.A. Today Bestselling Author, has a long and impressive list of titles to her name. Dragon School is a fairly well known series of 20 books and today we’re taking a look at the first installment of its sequel series, Dragon Chameleon: Rogue’s Quest.

These series are released a little differently than those I’ve reviewed before. Instead of being larger books released one at a time over a long period, these are released as shorter, serialized stories. The first Dragon Chameleon book was released in December last year, but it’s already up to a total of 12 books. The Amazon page states that there’s a new installment to be expected every second Wednesday. I find this method really interesting. Serials have been a mainstay of fiction ever since we started printing and publishing it on a frequent basis. What better way to engage your reader’s interest than a “Stay tuned for our next exciting installment!” tag line?

Does this approach work in the case of Dragon Chameleon: Rogue’s Quest? Let’s saddle up our majestic, flying steeds and head out to burninate some thatch roofed cottages, shall we? I mean, let’s find out.

Tor Winespring is, as you might glean from the title of the book, a rogue.

A likable rogue. Maybe even a lovable rogue. (He is. He really is.) But when we find him, he’s in the ruins of a city that has been destroyed in a war. (I will admit to wondering on the particulars of this – I can only assume that I would have a better grasp of things had I read the prequel series.) He’s trying to get himself some food by playing a shell game with the proprietor of a food cart when suddenly, he’s attacked by a stranger with swirling silver in their eyes and crazy magic.

We learn that this attack is targeted. Our new friend has a metaphorical target on his back.

We meet a character who already has the luxury of riding his own dragon; a large, purple one called Kyrowat and it is here that we learn a lot about the dragons of this universe. There are different colors and each has their own niche in dragon society. At least some of them are telepathic and can communicate directly within a human’s mind. They are large for the most part, some able to carry several people at once. And finally, that they have a lot of personality and are far from subservient creatures. Kyrowat definitely has a bit of attitude to him.

His rider, Hubric, had made Tor a promise some time ago: To take him to Dragon School and teach him to ride his very own dragon. Tor knows exactly which color he’s going to pick, too. They set off to get him set up at Dragon School and everything is great…. except that they’re going in the entirely wrong direction.

There’s a lot more going on here than meets the eye, and the political situation in this world is deep, layered, and in need of someone with Tor’s specific abilities. And he will get to ride a dragon. That’s already been decided. However, he won’t get to pick his own. Instead he gets Saboraak. A female dragon (Basically unheard of outside of dragon culture itself.) and the titular Dragon Chameleon. I won’t elaborate on this further because I don’t want to spoil it, but there’s an interesting peculiarity to this character that makes her the perfect match for our lovable rogue’s skill set.

Can Tor and Saboraak fight off the Magikaas (Evil magic users) and perform their mission? That depends on whether they can come to terms with one another first.

As would be expected from a serialized story like this, the book itself is pretty short. And I have to admit that I feel a little out of the loop in regards to the wider universe this story is set in. You can definitely follow along just fine without any prior knowledge of the world… but if you’re like me and a nut for continuity, you’re going to want to start with Dragon School and work your way towards Dragon Chameleon.

The world itself is detailed and well realized, though. You have different factions already in place, you have conflicts that are well spelled out. You have a magic system that is explained in enough detail to keep you interested but never with a burdensome amount of exposition; you never feel like you’re reading a rule book, in other words. The pace of the story is super fast and there’s barely a moment where something interesting isn’t happening and a lot of this is down to Tor. It’s a story told in first person and his internal monologue is charming and funny.

When he meets Saboraak, it’s clear that this is a two-person act. It’s a buddy dramedy, an odd couple tale. Their mental banter is hilarious! This isn’t an ideal situation for either one of them, yet, and they’re already being thrown into a high stakes, life or death mission. What’s not to love about that idea?

All in all, this is a fun, fast paced tale and I will definitely be checking out the others in the series.

Jim Newman: The serialized format of these Dragon stories is really neat. Where did you get the idea to do them this way as opposed to longer books released over a longer period of time?

: I’m a huge fan of tv shows over movies. I love how you can dive into characterization and tangled plots while still getting a great punch in a short episode. So, my novellas are inspired by the binge-ability of great tv series. I know that more and more people are like me – limited in time – and that makes a lot of short reads more accessible than one long read.

Jim: What challenges does the serial format provide as an author?

: I think that the biggest challenge is keeping each episode completely fresh. Since each episode is part of a bigger conflict with multiple battles, discoveries and many of the same antagonists reoccurring, it’s very important that each episode has its own flavor and doesn’t repeat scenes or fights from the other episodes. In my Dragon Chameleon series, there are twelve episodes, so that means twelve different climaxes and big turns in the story have to be shown and they all need to be different and (hopefully) a bit surprising.

Jim: What is the editing process like for a serial series and how does it differ from a more standard release schedule?

: For a serial like this one, you need a very keen second set of eyes – someone who loves the story as much as the writer does and who can notice things like repetition or any time something contradicts something that was said before. With such a fast-pace in the books, a lot of things happen, and it’s easy to lose track of some of the smaller plot lines without a great second set of eyes. I have Harold – a long-time fan of story and a great lover of detail. He reads everything I write and helps to keep me on track.

Jim: Tor is a really great character; what were your key influences in creating him and where he fits into this world?

: Thank you, Jim. I’m pleased that you like Tor. He’s probably my favorite character to write across all my series. Tor was inspired by Robert Jordan’s character Matrim Cauthon in the Wheel of Time books. I have always loved the roguish reluctant-heroism of Mat and I wanted to try my own take on that. Tor’s name, of course, is a nod to the publishers of the Wheel of Time series. I have a strong inner cynic, so channeling that is a lot of fun when writing Tor, but I think it’s his not-so-hidden heart of gold that readers connect with.

Jim: I’ll admit to being a stranger to the Dragon School universe, so forgive me if this question is a little redundant! Are there other magical creatures in this world and will they ever play a role in these stories?

: Thank you for asking! In Dragon Chameleon, our main characters are usually squaring up against golems, but in Dragon School their major opponents are Ifrits and in Dragon Tide, they face up against Manticores and a new addition to the bestiary – Draven. The Draven are an interesting creation of mine and I hope that fans of fantasy enjoy this new fantastical creature.

Jim: What’s one bit of advice you’d give to someone attempting a serialized series with a rapid release schedule like yours?

: Don’t lose sight of your vision for the series. When you are writing, editing and publishing rapidly to a strict schedule it can be easy to get tired. When that happens, I remember my vision and what inspired me in the first place and that helps steer my stories toward their goal.

Jim: What is your favorite dragon character from works that aren’t your own?

: I’m a pretty big fan of Toothless from How to Train Your Dragon. He reminds me a lot of my favorite dog growing up. I think it’s great when characters from stories can remind us of people and animals that we love – it makes it all feel personal.