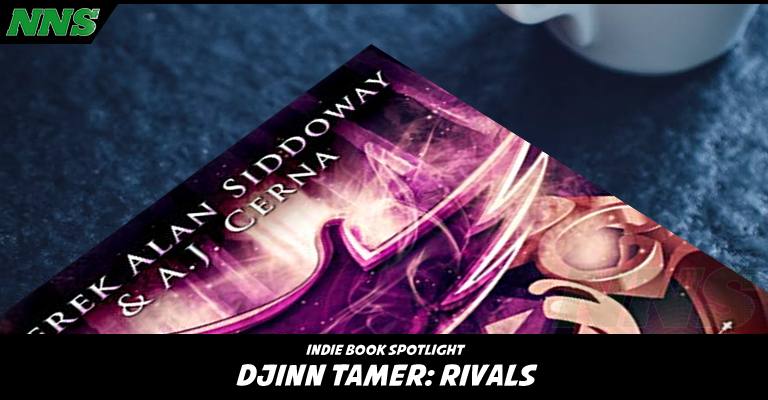 Hey there, readers! This is Jim, ready to dive into another book for you. I’ve already reviewed the first book in this series, and I loved it, so I’m about ready to take on the second; I’m talking about Djinn Tamer: Book Two: Rivals. If you missed my review of the first one, just click on through to read it.

One of the great things about the relative ease with which an Indie Author can publish on Kindle, is it allows for prolific writers like Mr. Siddoway and Mr. Cerna to get books in the hands of readers fast. I was delighted after having finished the first book in this series to see that I was able to pre-order the second one for delivery to my device only several weeks later. Likewise, I have the third on pre-order the same way. There are potential downsides to this as well… quality over quantity is generally a pretty good rule of thumb. But if I can get both, I’ll take it.

Anyway, let’s power on the Kindle and get this show on the road.

A small note, this review contains plot information for the second book in the series and as such, there will be some spoilers for the first book, Starter. If you have not read Starter yet, I can only encourage you to do so before reading this review. Consider yourselves warned.

Our friend Jackson from the first book is having a little trouble. For starters, he lost the tournament that would have allowed him to keep the family home in family hands. His Grandmother, Jane, and himself have landed on their feet and live in a nice apartment, though. The main trouble he’s having is that he and Asena, his partner Djinn, are stagnating. Tyle, his home town, only has a few Djinn tamers and they’re all relatively low level. Training with them doesn’t afford him much room for growth as a Tamer. Asena is getting harder to level up. If he’s ever going to live his dreams, he needs to find a better way to do it.

Bronze League Training Camp is on the horizon, but as his friend and rival Fiona Sato beat him in the all important tournament that would have let him keep the family home, he figures his chances of being Tyle’s representative are pretty slim. Only one per town gets picked each year after all. He’s pretty sure that the Bronze League has their eyes on Fiona and Fiona alone.

That is… until his invitation arrives.

Jackson reconnects with old allies and makes one very special new one on his quest to make it big in Training Camp. He also makes a new enemy along the way. Will Jackson and Asena prove that they have the heart and skills to win this thing and make it into the Bronze League?

Only one way to know for sure.

Rivals is a good, solid story with good, solid character building. We can see that Jackson has matured a lot in the weeks since the Vance McCallister invitational. Loss is often a proving ground, especially for young people. A test of character; do you accept defeat and give away the thing you want most? Or do you dust yourself off and keep going despite your aching ego? I’m happy to say, Jackson does the latter.

Not gracefully, he’s not stoic about it, but he’s determined. He has a predilection toward self doubt even still, but we can see some of that be worn away as it becomes clear that this is something he has a gift for.

Like all talents, though, it’s nothing without putting in the work to back it up.

There is a particular scene in this book that I want to talk about, but it’s too good to give away. All I’m going to say is you’ll know it when you read it and it proves that Jackson is a character worthy of having his story told. He has heart. He has compassion. He also has conviction enough to stick to his guns when everything and everyone else tells him he made a bad call. He’s a good kid.

Rivals does a lot to expand the world of Djinn Tamer. We meet new monsters, and we get a better insight into some of the older ones that were there in the first book. You can tell that our storytellers have put a lot of thought into these critters, but you never feel overwhelmed by exposition. Jackson’s view of the world is just one small piece of a larger picture and we’re allowed to piece the picture together ourselves. We also get to see two entirely new areas; a wildlife preserve where Tamers must obtain a permit to enter and capture Djinn, and of course, the training camp itself. This latter place is very interesting as it also gives us a greater insight into the League structure and even a small bit of knowledge about the economy of this world.

Again, this book is Game-Lit and so has small charts with facts and figures about the creatures. I think there is a little more of this in this second installment, but it still isn’t overbearing. It makes for a little fun, flicking back and forward through the pages to see stats increasing as we go. For those of us raised on JRPGs and especially Monster Training genre games, it’s a familiar and pleasant feeling to see those ever important statistics level up.

I hope that you give this series a look over, and I can’t wait to read (And review) Book Three.