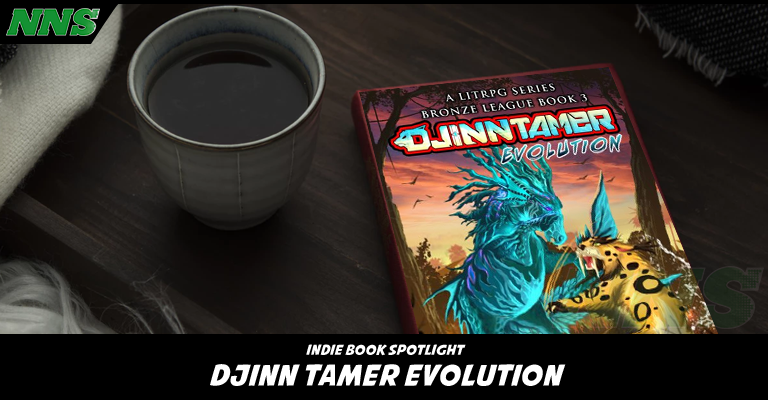 Readers! I hope December is treating you well. The weather is getting colder and wetter, so what better way to spend the time than curled up indoors with a cup of something warm, a blanket and a book or twenty seven?

Well, I have a great suggestion for you this time. A.J. Cerna and Derek Alan Siddoway‘s Djinn Tamer: Evolution. It’s a continuation of Jackson Hunt’s Bronze League adventures; in fact, it’s the culmination of his Bronze League journey. Win, lose or draw, it’s sure to be exciting!

For the uninitiated or unfamiliar, welcome! I’ve reviewed the first two books in this series here (Djinn Tamer: Starter) and here (Djinn Tamer: Rivals). The premise is Jackson Hunt gaining his first battling monster, Djinn in this world, and embarking on a quest to gain entry into the world of Djinn taming. For aficionados of the monster taming genre, these books feel fresh and new and comfortingly familiar at the same time. The monsters are great and Jackson, along with his friends, are interesting characters with their own goals and ambitions within the scope of the series. I definitely recommend starting from the beginning with Djinn Tamer: Starter and working your way forward from there.

But, we’re here to discuss Djinn Tamer: Evolution. Let’s power up the Kindle and get this leg of the journey underway.

Author: Derek Alan Siddoway and A.J. Cerna
Formats: Paperback and Kindle
Price: Paperback – $13.99, Kindle – $4.99 (Kindle Unlimited allows you to read for free.)
Length: 408 pages
Number of books in the series: At the time of writing, three.

It probably goes without saying, but there are spoilers ahead for books one and two. I try to keep this stuff to a minimum as I don’t want to ruin anyone’s potential reading experience by giving away the farm, but be warned anyway!

Jackson, Scrappy and Asena, having made quite the splash at Bronze League Training Camp, find themselves at the forefront of the year’s crop of new recruits for the Bronze League final competition. Jackson, along with Fiona Sato, Akamu Kaleo and Danai Azikiwei have been labeled the Fab Four, and are regulars of the Tamer talk show circuit. Exciting young Tamers with a bright future ahead of them! Particularly interesting is the fact that Fiona and Jackson both are from the same town. Usually, each town gets only one representative Tamer per year but due to Fiona being sponsored and Jackson being picked the traditional way, Tyle, their home town, has two Tamers in the league and sharing the limelight.

Not only that, but Fiona and Jackson have known one another for quite a while. Grown up together, in fact. And Jackson’s job, in what seems almost like a past life at this point, was as a ranch hand on the Sato Djinn Breeder Ranch. There’s an interesting dynamic, there; what happens when your fiercest rival is also someone you remember chumming around with in your younger days? What about when they’re someone you’re particularly fond of?

If you have answers to either of these questions, drop Jackson a line. He doesn’t seem to know how to handle it, exactly.

Not until he’s in the ring, anyway.

But forget all that. We have another problem on our hands. Asena is due to evolve. There’s a trickiness to this that I found quite unexpected! If she progresses past a certain level and remains a Lyote, the option to evolve into a Lobolf will be lost to her and she will remain in her base form forever, denied that statistical superiority of having evolved as well as the moves that come with it.

But if Asena evolves, will she be the same? Will she retain her lovable personality and loyalty to her Tamer? Will she become someone else? Jackson isn’t at all sure and considering Asena’s species is super rare, information on the subject is pretty hard to come by. Even Jessica Hunt’s research doesn’t help as much as Jackson might hope. His Mom was a top-notch Djinn researcher who disappeared under mysterious circumstances while researching Djinn and her notes were left with Jackson and his Grandmother. He searches through this research with a fine toothed comb to no avail.

Vega is a researcher with a particular interest in Lyote. He offers an expedition to the Lyote homeland of Lombardia to find a particular mineral. This mineral Everore is said to halt the evolution of a Lyote while allowing it to circumvent the stat limitations of being a base form Djinn. In short, Asena could remain a Lyote forever and still gain the strength and move versatility that she would have had as a Lobolf!

If this sounds a little too good to be true, you’ll have to pick this book up and read to find out whether or not that’s the case.

The third book in this series is just as fun and frantic as the first two. We get plenty of great monsters (Little disappointed in the fates of a couple of them. Pour one out for Trollava and Volcanogre.) and interesting characters, as well as a lot of story twists and turns that I wasn’t expecting. Jackson catches a new partner who I think is a pretty great critter and uses it to awesome effect!

And let’s talk about Jackson for a bit. He’s been Taming for a while, but he’s still grown a lot over the time we’ve known him. He went from being an impetuous, reckless kid to being an impetuous, reckless almost-adult in the space of three short books! I’m only sort of kidding. The level of danger he’s willing to face on behalf of his beloved Djinn is short of crazy, but only just. This is definitely the most adventurous we have thus far seen our favorite Tamer. It’s also the farthest afield that we’ve been in this world and it’s an excellent adventure story.

We still have Kay and Cassius Briggs along for the ride as well. Kay is a favorite of mine as a kid who wanted to grow up to be a Veterinarian so she was a welcome traveling companion for the duration of this story. Because a lot of it takes place away from the league proper, we see less of Cassius this time around.

In short, this book is a great ride. If you’re a fan of the Djinn Tamer world, you’re going to dig it. If you’re a GameLit fan, these are nice as well. As per usual, we have some charts and tables to inform us on the mechanics of these monsters and how this world runs. If you like monster battling in general, this needs to be your next foray into the genre… but start with Starter.

Speaking of Djinn Tamer: Starter – the very first book I ever reviewed for our great community here at Nerd News Social, it’s now available on Audible! Follow the link Here to check it out. It’s read by Oliver Wyman. If that name sounds familiar to any Pokemon fans out there, it’s because he voiced May‘s rival Drew in the Advanced series! (I mostly know him for Big the Cat. Froggy!)