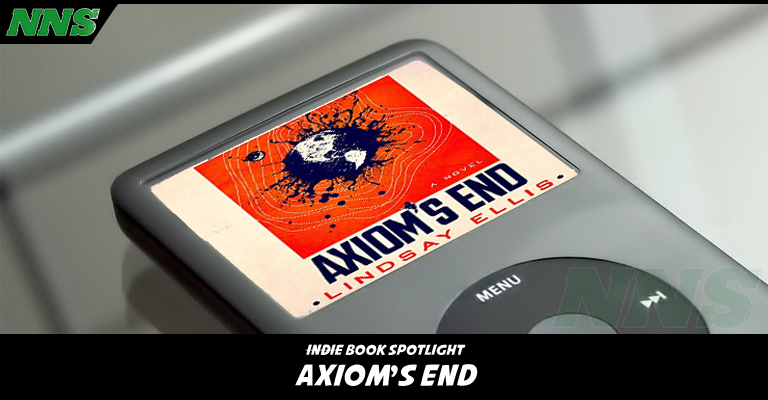 Hey, Readers. Welcome back to our monthly book spotlight.

It’s usually an Indie affair, of course, but this month I’m breaking with tradition to instead focus on Axiom’s End, published by St. Martin’s Press on July 21st this year. The version I’m reviewing is the Audible version.

So! Why this book? Two reasons. It fits well within my wheelhouse of Genre fiction for these reviews – I don’t stray too far from SciFi, Fantasy, Horror. It’s just what excites me and I’m the captain of this particular ship so the rudder bends to my whim. Secondly, I’m a big fan of Lindsay Ellis’s content on YouTube and have been for years. Her own channel provides thoughtful, deeply interesting video essays on storytelling, literature and film. (Along with lots of Phantom of the Opera and Transformers.) More recently, she’s working with PBS on the video series It’s Lit along with another amazing YouTuber, Princess Weekes. (Who’s own channel, MelinaPendulum, is similarly full of storytelling analysis and general awesomeness.) So, when she announced on her channel she was getting a book published, I was all in. I’d spent quite some time listening to her dissect and talk about stories and was excited to see her bring one into the world.

And it’s an alien story! I think there’s a particular group of folks who were raised with alien narratives along the lines of Alf, E.T. and the like who are immediately drawn to these kinds of tales. Who grew up imagining what it would be like to show a visitor from beyond the stars around their home town. I am firmly in this camp. And while this book definitely skews older than the aforementioned two examples, that feeling remains. My Pet Monster but set against the backdrop of looming financial crisis and the second Bush Administration.

So, let’s step back into the distant past; all the way back in 2007. We’ve got an alternate history to check out.

I’ll try to keep spoilers at an absolute bare minimum, of course, but certain plot points will be hard to discuss without at least a little context.

Author: Lindsay Ellis
Narrated by: Stephanie Willis and Oliver Thorn
Formats: Kindle, Paperback, Hardcover, and Audiobook.
Price: $14.99 for the Kindle, $9.84 for the Paperback, $25.19 for the Hardcover, and $21.83 or 1 Credit on Audiobook.
Length: 384 pages, 16 hours and two minutes in audio.
Number of books in the series: At the time of writing only one, with two planned sequels.

Cora Sabino’s Dad is famous. Not in the usual way, though. (Think Edward Snowden.) His name is Nils Ortega and he’s so good at dropping truth bombs online that he had to flee the country. Cora’s life never quite found traction after that. She changed her last name from Ortega to Sabino, wound up dropping out of college, has trouble keeping a job and in general her life is a messy, difficult place to… y’know. Live. Strained relationship with her Mom, strange relationship with her Aunt, Nil’s Sister. The family dogs sound adorable, though. (Thor and Monster Truck.) She has two younger siblings to think about as well. I’m sure worrying about setting a good example for them weighs on her. Throw in undue attention from government agencies focused on whether she has any contact with her Father as well as attention from the press and you have a stifling, claustrophobic place to be.

Then we get to the Events. Meteor strikes that seem to be anything but. Knocking out power, exciting the 2007 blogosphere and prompting Nils to further his accusations that Aliens have been here on Earth for decades and are being covered up by a government that is happier to keep us all in the dark.

Our story starts on the day of one of these events. Cora is at work, dealing with the aftermath of another post by her Dad when something crashes into the ground in her native SoCal. (I have to say that the depictions of L.A. area rush hour traffic in this book are just fantastic.) Power goes out, windows shatter and she leaves without clocking out and she is fired for it. That’s just the start of her worries, though, as later in the evening she hears a noise in the living room. She comes out to find the family PC has been dismantled by a huge, white creature that immediately flees the scene.

This is where our adventure really starts. Cora finds out just how deeply her family is tied into this situation… sort of. She has to really work to find out anything concrete and the process takes a while, but this is where she really gets to dip her toe in to get an idea of it all anyway. And not long after, she’s abducted and loses consciousness, only to find herself reawakened inside the Google campus, trying to access the server room.

After this goes awry she discovers that she’s now irrevocably tied to an alien who she calls Ampersand. He can comprehend and communicate in English via an implant he places in her head and so she becomes his interpreter – a role she plays throughout the rest of the book. Ampersand is alien in every sense of the word, with a different body type and with a very different mental landscape to what we might be used to. (There’s a hilarious scene with Ampersand trying to provide sustenance for Cora, but as a species who isn’t even biological in its entirety his concept of what she will consume is off by a wide margin.) This informs the rest of the story; This divide between human and non-human and the question of what makes a each one a person to the other.

And Ampersand isn’t the only member of his species on Earth. And his species isn’t the only interstellar interloper, here. This rabbit hole goes a long, long way down. So, how does a person with a messy, complicated life and a messy, complicated relationship to the wider world in general find her place in a far reaching story like this? I recommend picking up this book to find out.

In a world made up of people ‘in the know’, government agents, militarists and unfathomable intelligences, Cora stands out and is a wonderful protagonist. I empathized with her immediately; she wants to do the right thing but doesn’t always know what that is and the people around her give her an unreliable benchmark to figure it out by. She’s a normal person in a story where that entire concept is inherently absurd, but she’s also the perfect person to fill this role as Ampersand’s interpreter. She’s knowledgeable when it comes to linguistics but the joke is that communication and language can’t solve the problems humanity is about to face and in fact will just cause more problems. A large portion of this book is the idea that when you take two groups of people and try to integrate them, if there’s a clear disparity in power it will not end well for the group who’s grasping the shorter end of the stick. In this way, the book looks through a fantastical lens at every interaction humanity has had with itself when one culture meets and dominates another. While this theme isn’t exactly new and has been tackled by many SciFi properties (Especially stuff like Star Trek.) the way it’s handled in this book is fresh and very personal. I think that’s the best way to describe it – Cora’s involvement makes these themes alive and visceral instead of academic, dry or in any way trite.

In terms of pacing, this book runs pretty fast. A lot happens very quickly and it’s evenly paced throughout. This doesn’t mean that there aren’t moments of introspection and thoughtfulness, but they are sandwiched between big ideas and action. In short, it never drags even in the moments we’re allowed to sit and breathe. As mentioned above, the version I got was the audiobook. I do this a lot because it’s a way for me to read while I take care of the myriad other things I have to get done in any given day and I did find myself rewinding the book every so often to be sure I didn’t miss anything.

It’s very clearly an alternate timeline story. Starting in 2007 in the latter years of George W. Bush’s Presidency, we’re given interesting context cues as to how things are different. Each part starts with a snapshot of the stock market, for example. Chapters are interspersed with correspondence between characters, articles about events and characters in this different version of a world that still seems so much like our own, interviews and other bits of media and material that grounds the story. A lot of it centers around Nils Ortega and how instrumental he is to this entire narrative. He’s omnipresent and yet absent at the same time. Anyway, these bits of context show you exactly where this timeline deviates from ours and how. It’s a great touch. (In the audiobook version, these voices are provided by a different narrator as well.)

All in all, I highly recommend Axiom’s End.