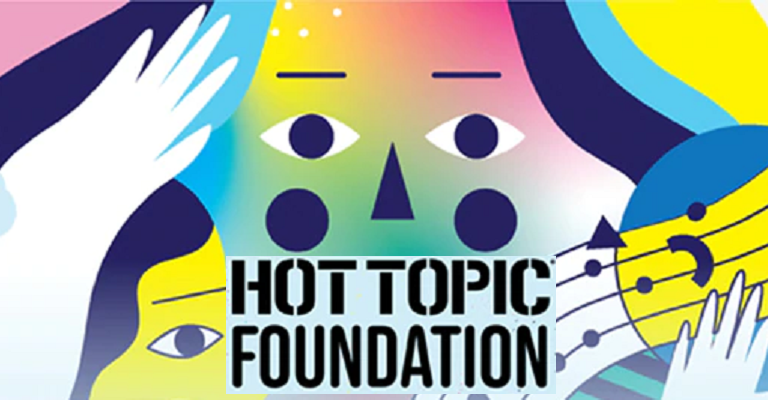 Hot Topic Foundation has partnered with Mental Health America to bring us this new movement, meant to help remove the stigma surrounding those who struggle with invisible illnesses, by promoting conversation and normalization of the subject, in addition to helping to provide resources to those in need by funding non-profits who can help. 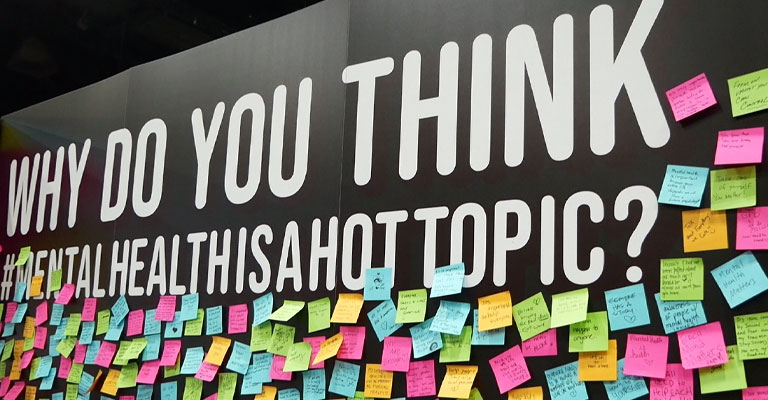 Invisible illnesses affect more people than you think. In America, 1 in 5 people suffer from a mental illness, but only half received treatment*. Invisible illnesses like depression and anxiety are more than just someone feeling sad or nervous. These disorders have a very real affect on the brain and its functionality. Untreated depression has been shown to degrade the brain’s memory centers, and those affected are nearly twice as likely to develop cardiovascular and metabolic diseases, compared to the general populace. Mood disorders are the most common cause of hospitalization in the U.S. for those under 45 years old (not counting pregnancy and child birth), and roughly 20% of those who are homeless, 37% of those incarcerated, and 70% of those in juvenile detention are mentally ill*. Mental illness also creates an increased risk of unemployment, since it creates issues like executive dysfunction in those affected. 46% of people who commit suicide have a mental health condition, and suicide is the 2nd leading cause of death in people ages 10-34*.

What does it look like to live that life? Coming from someone who has Severe Clinical Depression, ADHD-I, and Generalized Anxiety Disorder, I can tell you that getting through a day with any form of productivity is a miracle.

It starts with struggling against the alarm. I have two children. One goes to school in the mornings. He has ADHD, too, so I need to get up with a lot of time to spare for the both of us getting lost. Before I took antidepressants, this was a lot more difficult than it is now, but it’s still pretty hard to do. Being responsible for another human life is a great motivator, but there are obstacles for sure. My son and I both need constant prompting to make it through the morning. An alarm to wake up, an alarm to stop scrolling Reddit and actually get up. An alarm to seriously, you have to get up right now. Yell at the kid to get dressed. Are you dressed yet? Shoes and socks? Dammit, why do you not get that shoes and socks are included in getting dressed, you’ve literally been doing this for 7 years. Once he’s at school, I have an alarm that literally takes over my entire phone screen to remind me to take my medication. Then another similar alarm to do some dishes. Sometimes my depression makes it hard to get up and do those things. I’ll literally be yelling at myself in my own thoughts to get up and do something. Get up and cook food. Stop eating candy, and go make a real breakfast. Reese’s are not breakfast. Put it down. Dammit, I ate another one. Then the spiral tries to start. Before antidepressants, that spiral would have me badmouthing myself for the rest of the week. If I’m able to prepare a meal for the baby, I do dishes as it’s cooking. If I don’t have the spoons for it (Spoon Theory, it’s worth the read), I have some simple, pre-prepped meals for her, but dishes don’t end up getting done. I have an alarm for doing an article, but that usually gets away from me because holy shit now my “pick up the kid from school” alarm is going off, and dammit I forgot to thaw out the chicken so now I have to buy some from the store. Now it’s 4pm suddenly and I have to start cooking dinner. OMG I’m so tired, why am I so tired? Eric just got home. He’s disappointed that I wasn’t productive. Again, if I wasn’t on medication, this would create a spiral that would last at least a full week. We watch shows together until it’s bed time. Then the cycle starts all over again.

Some days are worse than others. On the good days, I try to prep stuff for my bad days. Meal planning, for example. I typically have a week’s worth of meals planned out, and some are simple grab and go meals while others are more in-depth cooking experiences. There are a lot of lists and sticky notes around the house to try and keep my on task. My Google Draft folder is filled with the beginnings of articles that need writing. But the best help is the support of my husband. If he wasn’t here to keep me on task, I would probably never eat, lock the door, or socialize.

Hot Topic Foundation and Mental Health America are doing a phenomenal job bringing awareness to something that affects so many people, half of whom are afraid to talk about it because it’s still largely considered to be a fake illness. I mean, how could everyone hate me and be out to get me, if no one cares about me, right? These two giants are helping people understand that, in a person suffering from these illnesses, it’s not laziness or procrastination so much as it’s executive dysfunction.

Purchase a shirt from Hot Topic Foundation Here to:

It’s okay to talk about depression, anxiety, suicide, and all the other things that play a part in claiming so many lives. 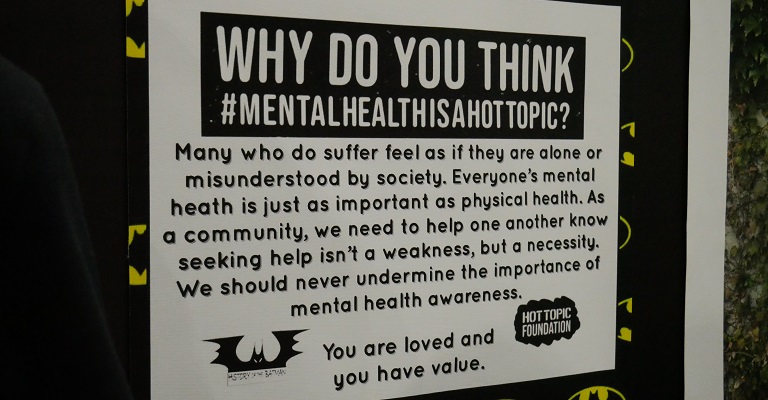 Are you one of the 1 in 5 people who suffer from a mental illness? Share your experience in the comments!

If you, or someone you know, is considering suicide, PLEASE reach out to someone! Call the National Suicide Prevention Lifeline at 1-800-273-8255. If you’re looking for a sign, THIS IS IT! You are LOVED!