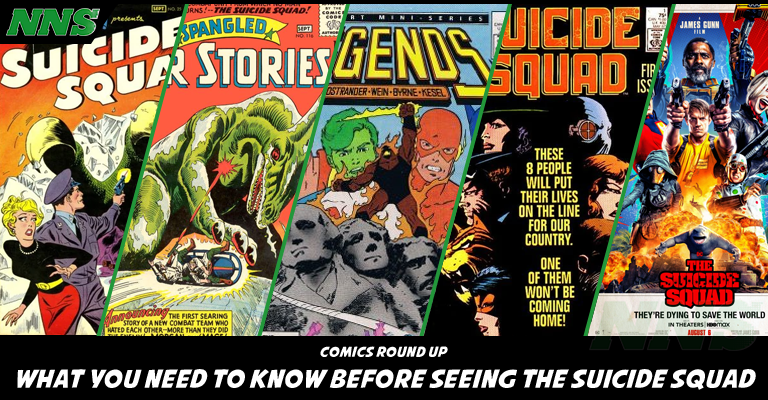 Suicide Squad isn’t a comic that only recently existed. It’s first appearance was In 1959 in The Brave and the Bold. No not the Batman Cartoon staring Diedrich Bader as Batman/Bruce Wayne, The Brave and the Bold that the series takes its name from was a comic book series from DC Comics that ran from 1955 through 1983 and focused on character team-ups.

In fact, the Suicide Squad actually took over three of the comic books from the series, issues #25 through #27, then again in issues #37 through #39.

While The Brave and the Bold‘s Suicide Squad held the name, the comic written by Robert Kanigher and artist Ross Andru doesn’t look anything like the series run of today. The original Suicide Squad took place during World War II, and was a band of military misfits.

It’s interesting to know that this was the creation of Rick Flag, who is currently the team leader in both the original Suicide Squad movie and the coming soon The Suicide Squad from James Gunn.

The original team of misfits was not criminals or monsters, but just expendable soldiers that risked their lives to save the world. Later it was retconned in Star-Spangled War Stories issue #116 that there was an, even more, an older team called the Suicide Squadron lead by Rick Flag’s father of the same name.

After the events of Infinite Crisis, Rick Flag was removed from the history of the team. In 1987 the Legends series issue #3, the team returned closer to their current incarnation. In the comic, Amanda Waller discovered the old files of the prior teams and decided to revive the program using imprisoned super-villains titled Task Force X, which Rick Flag volunteered to lead.

In this version, we have Boomerang from both movies and Deadshot and Enchantress who were in the first movie. We also had the explosive charge, but in this version in the bracelets.

The new version was written by John Ostrander, not to be confused with Dr. Manhattan’s alter ego Jon Osterman. After the success of the Legends print, the Suicide Squad got their own series that ran from 1987 through 1992.

There have been over 70 comic books dedicated to the Suicide Squad, and many villains have been rotated through the series. While normally we would say go read this comic book, or go pick up this reprint, it’s probably not necessary. The Prior movie, and in theory this movie, will do a great job covering the basic concept:

Sleezy Government Agency offers prisoners/villains freedom if they risk their lives in a mission that will be almost guaranteed to kill the members of the task force. Then the criminals betray one another, while some work together and actually learn the value of what they are being forced to do.

I mean, that’s basically about it. While David Ayer’s film, Suicide Squad from 2016 was ruined by the studio, Ayer’s words, not ours, James Gunn was given complete control, and it’s likely to be amazing.

Let us know what you thought about the movie!