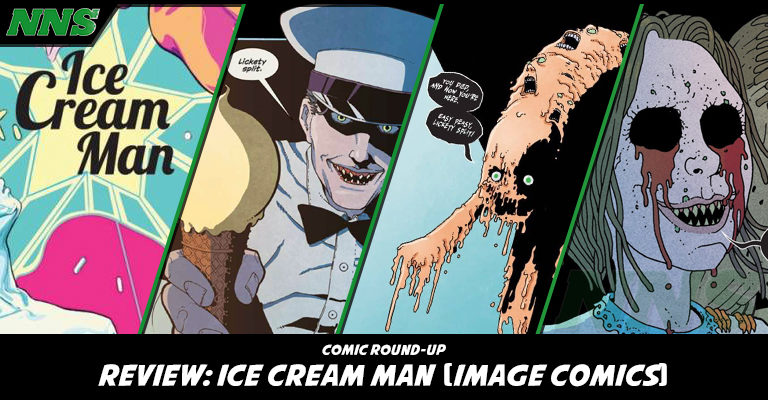 I scream, you scream, we all scream for HORROR COMICS! I am actually very impressed with myself on the timing of this… I randomly started reading the comic Ice Cream Man by Image Comics earlier in June and just finished volume 4 the other night. It turned out to be perfect timing to tie in National Creative Ice Cream Flavors Day with the comic review of Ice Cream Man! Murder being the Ice Cream Man’s favorite creative flavor of ice cream…

But for real, this is a national holiday so let us know your favorite creative flavor of ice cream and the weirdest flavor you ever had. Now lets get into the yummy part… the comic review!

Let’s find out who on earth could have come up with this series, and the status of the comic series. Lucky for us, this is an on going comic! This review will be for the current available volumes 1-4. Volume 5 (Other Confections) is coming out, or should come out, September 2nd 2020.

The series is written by W. MAXWELL PRINCE (ONE WEEK IN THE LIBRARY), with art by MARTÍN MORAZZO (GREAT PACIFIC) and CHRIS O’HALLORAN (GENERATION GONE). It also has some amaaaaazing guest covers which you can see if you pick up the volume which includes extra illustrations about the character designs. 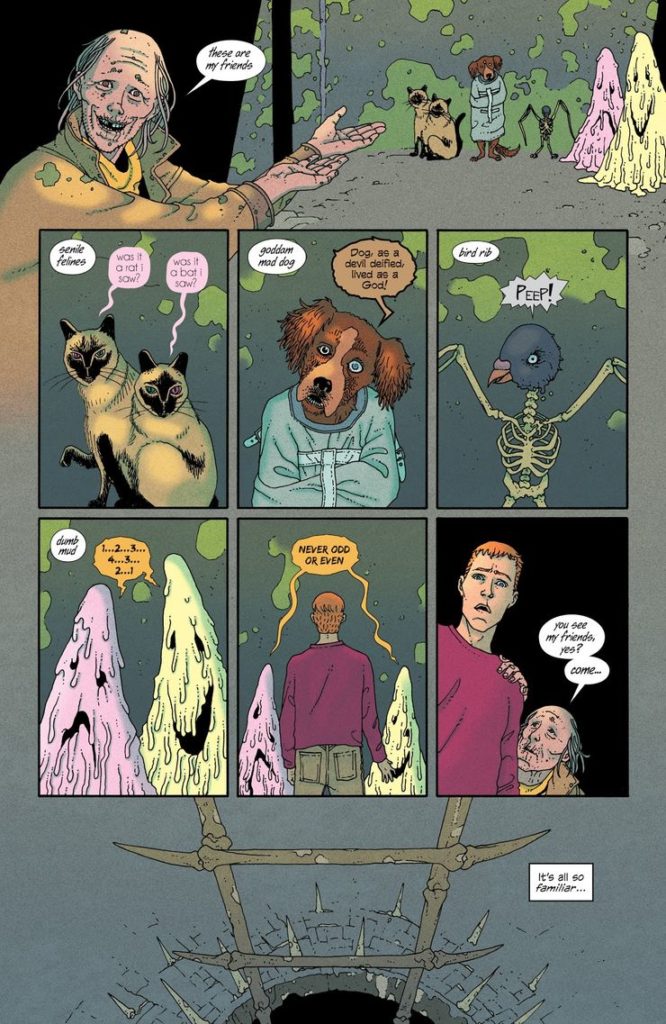 So about now, if not sooner, you’ve probably been thinking what in the holy hell of 31 flavors could this comic be about? Well, in my opinion, this comic is genre-defying. The closest thing I can label it to is a series of ‘one-shot’ sci-fi horror tales of sadness, misery, with a twisted form of redemption sprinkled on top. Across all the tales, is the twinkly eyed Ice Cream Man. Is he friend? Foe? Demon? God? One thing is for sure, he’s not to be trusted and can change the course of someones life “lickety split”! Though there is one character that seems to rival the Ice Cream Man and his powers. Who are they? Where and when do they come from? There are so many fun questions building up in the 4 available volumes and I can’t wait to find out more!

Pay close attention when reading this delicious series. There are some really fun details in the illustrations. Characters (and insects) you see from other issues, are sometimes sprinkled through some of the other issues in the background. Another great detail is the way the volumes are named and how the colors are used in the comics, like ice cream layers. Two interesting issues that I will mention and not spoil, lucky issue #13 can be read forward and backward, backward and forward! A palindrome of an issue since even the panels per page create a numeric palindrome and some of the characters speak in palindromic sentences! Very clever! I will also briefly mention there is an issue theming around a crossword puzzle that was done incredibly well! 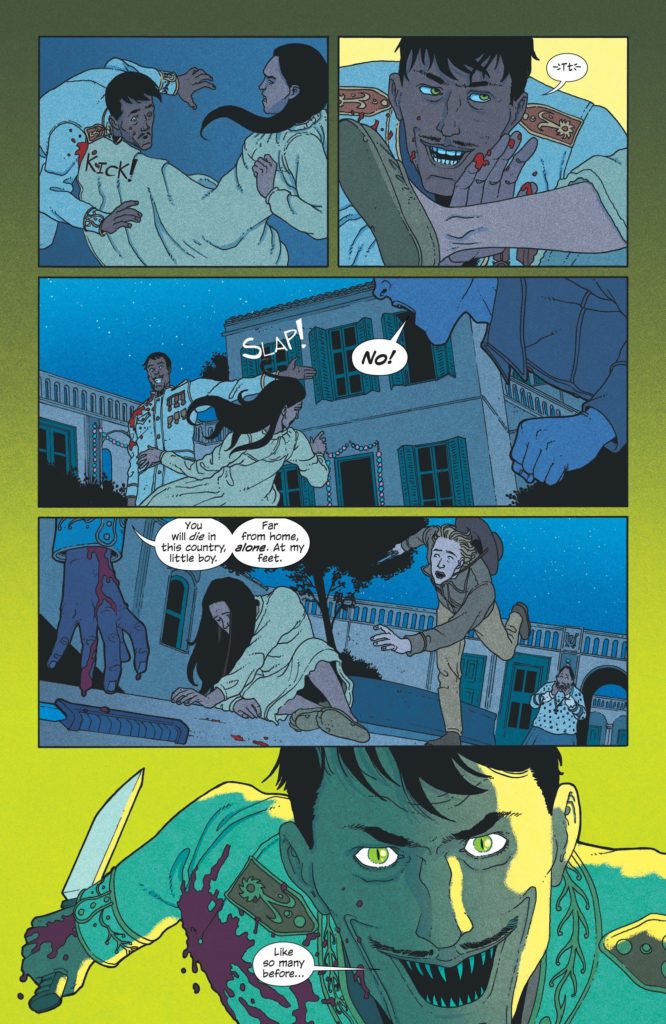 I love the mystery of who the Ice Cream Man could be, why is he doing these things, how does he have this power, and where/when did he come from are things very interesting to me. In addition to the overarching story, I also love the dark one-shots and the slow entrance of what seems like the Ice Cream Mans rival. After reading some comics like The Outcast, Kill or Be Killed, and Monstress for examples, I do wish that the gore level was a bit higher in this comic. But also, hey… it could get darker and it seems like it is going that way. There are a few frames that really make me stop and appreciate the evil going on in there in the story and illustration which is what makes me want more. I know they can do it!

This series is for the people who would love a more sinister Twilight Zone. And even though I would say these stories are “one-shots”, do start from the beginning and pay close attention to the details. Especially the pages before the comic, there are some quirky things in there too. 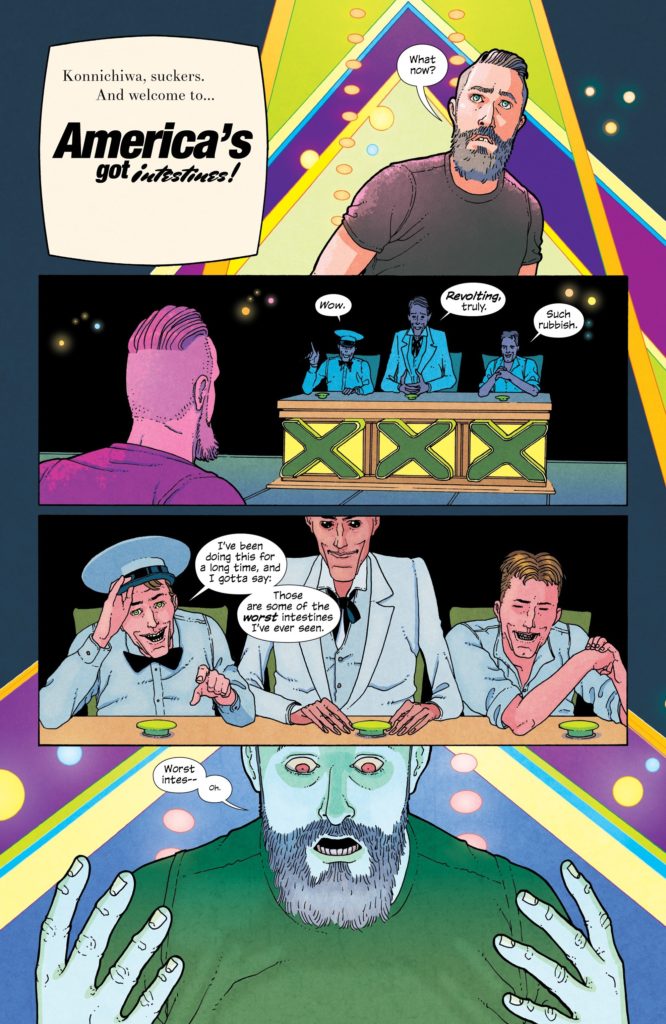 If you would like to read issue one for FREE, and if you are over 18, click HERE to take to you the official Image Comics website to read it. And if you enjoyed it, consider supporting your local comic shop.

So there we have it! A delicious review of a comic I enjoyed! What comics are you reading right now? What is your favorite flavor of ice cream? Are you going to give this comic a taste? Let us know in the comments and I’ll catch you next time, same Nerd-Time, same Nerd-Channel!